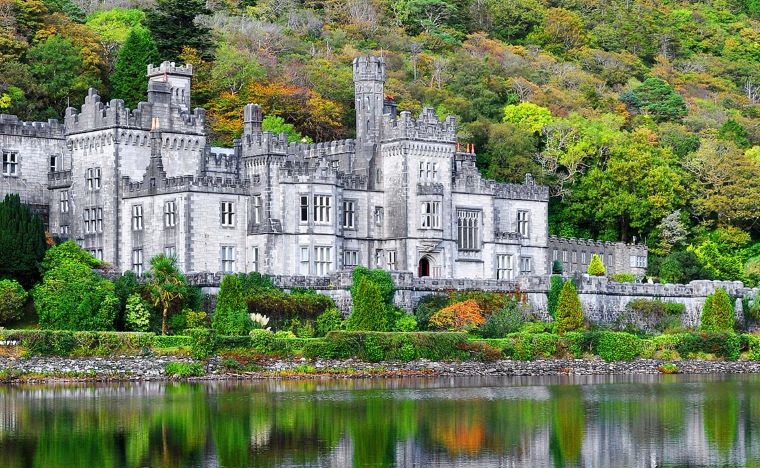 They were imposing, fortified hubs from which lords, queens, and kings repelled invaders, quashed rebellions, and launched bloody campaigns that changed the course of Irish history. And today, there are more than 1,000 castles across Ireland. Some remain only as ruins, while others are in pristine condition. Together, these castles help bring to life the ancient tales of this beautiful nation, which, for so many centuries, was occupied by foreign forces and divided by internal rifts.

Kilkenny Castle
The Normans caused carnage when they invaded Ireland in the 1100s, forging a path of death and devastation. One of the few positive aspects of their legacy is the commanding Kilkenny Castle. Built by the Normans in the late 12th century, this gigantic complex still dominates the tiny city of Kilkenny. Tourists can access more than a dozen lavish rooms within the castle. The highlights include the Chinese Withdrawing Room, which is decorated with 200-year-old handpainted Chinese wallpaper, and the enormous Picture Gallery that is lined with ancient portraits. Kilkenny Castle also has gigantic, immaculately-landscaped lawns and gardens, perfect for a romantic walk or family picnic.

Donegal Castle
Deadly sieges, foreign invasions, bloody mutinies, the rise of ferocious kings, triumphs, and tragedies: All of this was experienced by one powerful clan that ruled from Donegal Castle for centuries. This is the story of the O’Donnell Dynasty. To trace the remarkable tale of this clan, which wielded enormous power for 1,000 years, you can travel to their stronghold of County Donegal and visit their old castle. Donegal Castle is among the best-maintained medieval castles in Ireland, dating back to the 1400s.

Ashford Castle
Your daydreams about owning a castle can come true, to an extent, by staying in Ireland’s most opulent castle at Ashford. Regularly voted as one the world’s best five-star hotels, Ashford Castle boasts a commanding location on the banks of Lake Corrib, amid verdant woodland in County Mayo. This stunning 350-acre estate, once owned by the Guinness brewing family, has a horse-riding academy, archery range, private golf course, endless forest and parkland, and even Ireland’s foremost falconry school. The hub of all this is the 800-year-old castle.

Lismore Castle
The palette of colors seems almost impossibly vast. Bright reds bleed into striking pinks, flanked by warm oranges, citrus yellows, ocean blues, and fluoro greens. These hues paint the flowers that decorate a huge garden on the grounds of a magnificent castle. The perfectly-trimmed hedges, winding stone paths, flowing fountains, and endless flowers of Lismore Castle make for a calming, meditative space. This well-preserved castle dates back more than 800 years and is now the Irish residence of the British Duke of Devonshire in County Waterford.

Grace O’Malley’s Castle
On the Atlantic Ocean, in County Mayo in the far West of Ireland, Achill Island is a place of raw beauty where the Gaelic language is still widely spoken. Here, by the water’s edge, are the remains of a castle named after Ireland’s famous pirate Queen. Grace O’Malley, also known as Granuaile, used this 15th-century castle as one of her homes while she led the O’Malley Clan during the second half of the 1500s. She was famous for her rebellion against the occupying British. The magnificent Tower of Kildavnet is the best-maintained remnant of her castle here on Achill. 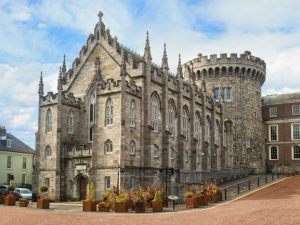 Dublin Castle
Part medieval castle, part government office, part tourist attraction, Dublin Castle is one of the most unique structures in Ireland. The original castle, with its giant stone tower, is more than 800 years old, although only parts of the building remain in place. Attached to the original castle is a more modern administrative building, which was the Irish hub of the British Government until 1922 when Ireland had become independent. Although there are still Irish government agencies based in this complex, tourists can visit every day of the week, with guided tours available.

McDermott’s Castle
McDermott’s Castle should be a major tourist attraction, but somehow isn’t. Few castles in the world own a more spectacular location than this fortified mansion, marooned on an island in pristine Lake Key, which is surrounded by lush forest in County Roscommon. It’s not clear exactly how old this structure is, but there has been a castle on this island for more than 800 years. The current castle was built at least 500 years ago by the McDermott clan, who commanded this part of western Ireland for more than 600 years up until the late 16th century.

Kylemore Castle
Set at the foot of a wooded mountain and on the banks of a placid lake in Ireland’s most rugged national park, Kylemore Castle is a beautiful, romantic setting. It makes sense then, that this was the location chosen by a man who wanted to build a symbol of love for his wife. In the late 1800s, British businessman Mitchell Henry built this enormous castle in Connemara National Park for his wife Margaret. After he passed away, this stunning estate in County Galway became owned by Benedictine Nuns, who still occupy what is now called Kylemore Abbey. Tourists are free to roam the property and its manicured gardens.

Dunguaire Castle
It is not easy for a castle to stand out in Ireland, but what makes Dunguaire Castle unique is that you can gorge on an old-fashioned feast inside its lofty walls. This 500-year-old castle in County Galway regularly hosts four-course banquets in its cavernous dining room. It also has been used as a fairy-tale setting for film and TV due to its picturesque waterside location.

Parke’s Castle
Parke’s Castle is best viewed from afar. Lake Gill, on the banks of which this castle is situated, is perhaps one of the most gorgeous places in all of Ireland and offers wonderful views of this castle from the walking trail that hugs the lake’s south shore. This castle in County Leitrim was built about 400 years ago and is in terrific condition thanks to a major restoration 20 years ago. The best way for tourists to visit is by catching a scenic boat cruise from nearby Sligo city.