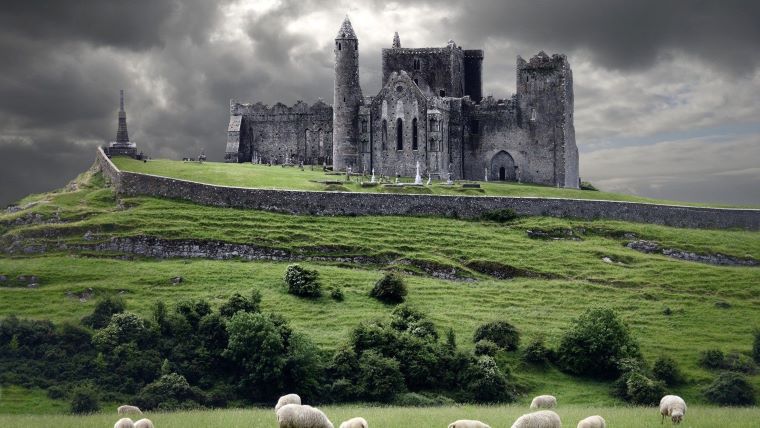 From imposing military towers to romantic ruins to stately homes for the nobility, each and every castle in Ireland has its own unique history and heritage.

Dunluce Castle in County Antrim
In County Antrim you can find Dunluce Castle clinging to a rocky outpost of the north Antrim coast. The castle was built or rebuilt by Richard de Burgh or one of his chief followers during the Anglo-Norman period in Ireland, around 1150 AD. It replaced a fort in the same spot. Under siege by the British in the 16th century, it fell into disuse in the 17th century when the MacDonnells abandoned the castle. Dunluce is reputed to be the inspiration for Cair Paravel, the famous castle in CS Lewis’ the Chronicles of Narnia. On a clear day you can see out over the sea to the island of Islay in the Irish Sea. Dunluce Castle is located 3 miles East of Portrush on the road to Bushmills. Tours are organized from Easter to September and can be pre-booked out of season.

Birr Castle in County Offaly
Birr Castle was originally a seat of the O’Carrolls, who were outlawed in 1620. The gardens are a real draw with one of the greatest displays of magnolia in the country. Flowers aside, the massive telescope in the castle is its main claim to fame – with the first telescope at Birr Castle built in 1825, and constantly rebuilt and improved upon by consecutive castle inhabitants, the telescope was the biggest in the world until 1917.

Trim Castle in County Meath
Trim Castle in County Meath and on the shore of the Boyne. This was the largest and most important castle in Ireland for several centuries, and with its garrison of Anglo Normans watched over the ‘dangerous natives’. Every precaution was made to ensure the castle was highly unwelcoming. Uninvited guests were treated to defenses like boiling water, tar, arrows, rocks, and other nasty weapons would rain down on them from overhead. It was built in at least three stages, initially by Hugh de Lacy around1174 and then in 1196 and 1206 by Walter de Lacy. 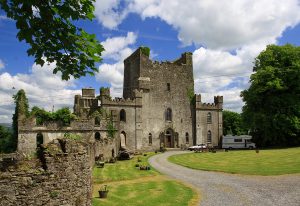 Leap Castle in County Offaly
Leap Castle is situated in the village of Clareen, County Offaly. Leap Castle is reputed to be the most haunted castle in Ireland. It has guarded the pass from Slieve Bloom into Munster since the 14th century, and its spectre is a particularly smelly one – it was even witnessed by poet WB Yeats on a stay in the castle. Through turbulent centuries, Leap Castle kept watch for the lords of Ely O’Carroll and still stands fortress-like on its perch overlooking a vast stretch of the countryside.

Enniskillen Castle in County Fermanagh
Enniskillen Castle in County Fermanagh. The castle is situated beside the River Ernewas was built almost 600 years ago by Gaelic Maguires. Guarding one of the few passes into Ulster it was strategically important throughout its history. In the 17th century it became an English garrison fort and later served as part of a military barracks.  This historic site houses two museums, Fermanagh County Museum and The Inniskillings Museum.

Thoor Ballylee Castle in County Galway
Thoor Ballylee Castle in County Galway. This castle, in which poet W.B. Yeats lived for 12 years was a Sixteenth century Norman castle built by the family de Burgo, or Burke. It was also close to Coole and Yeats’ life-long friend Lady Gregory. The tower had to be restored before Yeats could live in it. By the summer of 1919 Yeats and his wife and daughter had moved in. After the Yeats family moved out in 1929 it fell into disrepair, but Thoor Ballylee was restored as ‘Yeats Tower’ in 1965 and fitted out as a Yeats museum. Today it contains an interesting collection of first editions as well as items of furniture. The adjoining cottage is fitted out as a tearoom and shop.

Ballynahinch Castle in County Galway
Ballynahinch Castle is steeped in a wealth of tradition and has been intertwined in the history of Connemara and its people for many centuries. From the days of the O’Flaherty Chieftains, to Grace O’Malley, the Pirate Queen of Connemara, to Humanity Dick Martin, founder of the society for the prevention of cruelty to animals and to H.R.H. the Maharajah Ranjitsinji, also known as the ‘Ranji’, Prince of Cricketeers. The name comes from the Irish Baile na hInse meaning settlement of the island. Ballynahinch Castle is located at the heart of the Ballynahinch Estate between Recess and Roundstone in Connemara. Comprising of 450 acres of beautiful woodlands, gardens, lakes and rivers. This sporting country estate offers a secluded retreat of peace for any visitor. The history of Ballynahinch Castle goes back over 700 years. It was the home of ‘The Ferocious O’Flahertys” and one of its most famous residents was Grace O’Malley from Mayo who married Donal O’Flaherty in 1546.

Tullynally Castle in County Westmeath
Tullynally Castle has been the home of the Pakenhams’ later Earls of Longford, for over 350 years. The original 17th century fortified house was remodelled first as a comfortable Georgian mansion, then as a huge rambling gothic revival castle in the early survive in private hands. The interiors, part Georgian, part Gothic revival, have a fine collection of furniture and pictures, a 1800’s, by the 2nd Earl of Longford. It is still lived in as the family home, now probably one of the largest in Ireland. Situated 1.5km just outside Castlepollard on the Granard road (signposted), 14 miles from Mullingar and 55 miles from Dublin via M4 or N3. The guided tours also take in the splendid Victorian kitchens and laundries, complete with all their equipment.

Ballinfad Castle in County Galway
Ballinfad Castle was a Martin family reconstruction of an old 15c O’Flaherty stronghold in Connemara. Known as the Castle of the Curlews, this castle was built around 1590 to protect the pass over the Curlew Hills. It was garrisoned by a Constable and ten wardens from 1610 to 1626 and, after a stout resistance, had to surrender in 1641 due to lack of water. The plan of the castle is modeled on those of 13th century castles, with a small central square block dwarfed by four massive towers at the corners which are round outside and square inside. Now restored for hotel use.