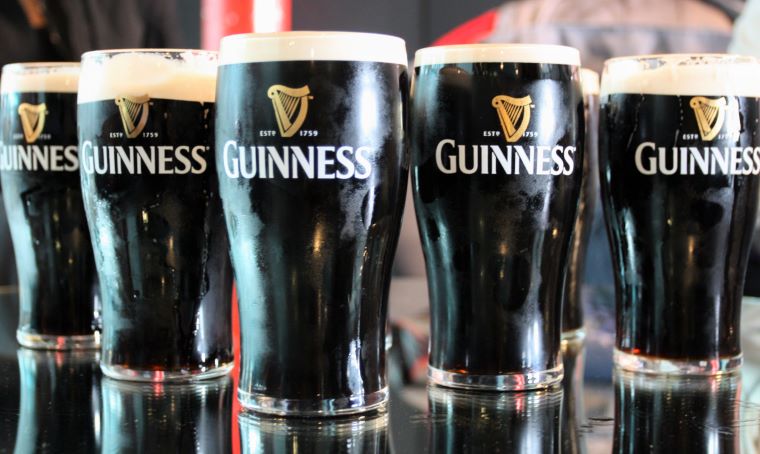 There is more to Guinness than meets the taste buds. Today, the Irish stout is enjoyed in over 150 countries around the world.

1. The color of Guinness is not brown or black; its official color is deep ruby red.

2. Would you believe it: 10 million glasses of Guinness are sold every day around the world.

3. Guinness was one of the first trademark-protected products ever. According to the brewery, the company came up with a trademark label in the 19th century to “protect the Guinness name” overseas. That includes the harp on the label and the signature of Arthur Guinness (the original brewer).

4. The harp on the label is based on a on a famous 14th-century Irish harp known as the “O’Neill” or “Brian Boru” harp, which is now preserved in the Library of Trinity College, Dublin.

5. The harp is also the official national emblem of the Republic of Ireland and can be found on the Republic’s coinage.

6. Its a stout kind of day for everyone: Guinness is sold in more than 150 countries.

7. In case Saint Patrick’s Day (and every day) wasn’t enough reason to drink a Guinness, the brewery found one more day to celebrate. Arthur Guinness Day, a made-up holiday to celebrate Arthur Guinness, is now another day to listen to live music, party, and drink a Guinness of course (Guinness replaced this day in 2014 with Guinness Amplify, a music celebration taking place over a month and featuring new Irish music groups).

8. The porter you love today originally began as an ale. According to Guinness, Arthur Guinness originally brewed ale and only started making porter in the 1770’s due to some competition from other brewers. 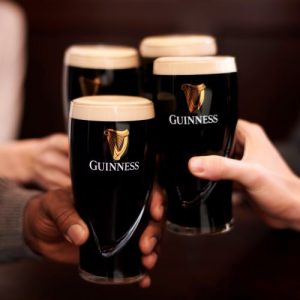 10. The brewery is also behind the Guinness Book of World Records. In 1954, the head of Guinness, Hugh Beaver, got into an indignant fight with someone and decided to commission an official reference guide to solve all disputes. It was originally a promotional item Guinness gave to bars who stocked the Guinness brew (because you never know when an official reference guide could settle a bar fight).

11. Guinness bubbles are a special kind of breed. The head of Guinness is unlike any other, because the beer is dispensed using a mix of nitrogen and carbon dioxide. That gives the beer a thick head, very little carbonation, and a smooth taste.

12. When poured at an angle of 45 degrees, it takes 119.5 seconds for the perfect pint of Guinness to settle. So relax, and settle in a little!

13. The first overseas Guinness brewery was opened in London in 1936; and the next locations of Guinness breweries may surprise you: in Nigeria, Malaysia, Cameroon, and Ghana.

15. Guinness is known for being a bit old-school. The brewery stuck with wooden kegs until 1963 (which you can still see at the brewery in Dublin today).

16. There is in fact a science to the art of drinking a Guinness. One study from the Brisbane Initiative found that Guinness is really only enjoyed best from the tap in Ireland, taking into consideration “pub ambiance,” drinking buddies, and other external factors. “This study is the first to provide scientific evidence that Guinness does not travel well and that the enjoyment of Guinness (for our group of non-expert tasters) was higher when in Ireland,” reads the abstract to the study. All the more reason to head to Ireland for a pint.

17. Guinness can literally be cooked into anything. Might we suggest the pot roast brisket? Or the triple chocolate cookies with Guinness and sea salt?

18. There are a lot of animals that come with a Guinness and we don’t just mean the braised oxtail cooked with Guinness. Legendary artist John Gilroy was the first to create advertisements in the 1930’s using zoo animals a toucan, ostrich, crocodile, and more.

19. Gilroy was also the man behind the “Guinness is good for you” advertising campaign from the 1930s. And right he was a 2003 study from the University of Wisconsin found that Guinness has high antioxidant properties, as well as a high iron content.

20. Guinness Under the Sea:  there is a deep-sea Guinness bar.  It was creates in a submarine and was for a contest in 2009.