A Brief History of the Bagpipes 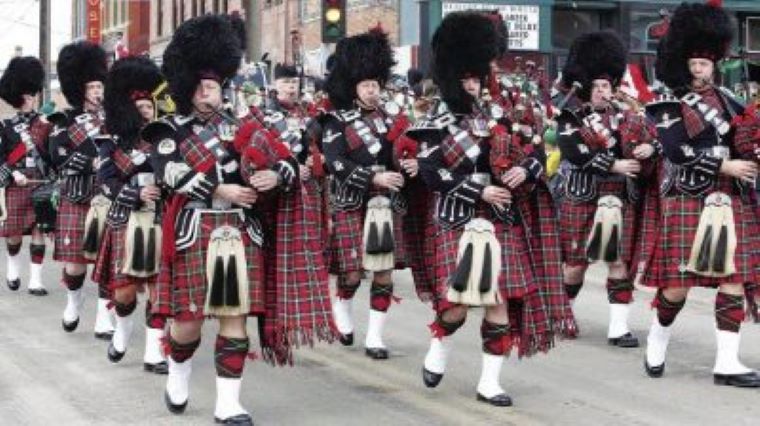 Although bagpipes are thought to be Middle Eastern in origin, possibly dating back as far as 4000 BC, the instrument spread throughout Europe during the early part of the second millennium AD. Unsubstantiated claims for their use in Scotland date from around 1300, but the first concrete evidence of “warpipes” being used in their traditional role on the battlefield comes from writings about the Battle of North Inch in 1396. This early association with the military has always stayed with the bagpipes; their penetrating notes were used to unsettle the enemy, and communicate with allies. The unique construction of bagpipes means that the high pitched and VERY high decibel shrills and skirls emanating from them can be heard for several miles, and with their aggressive tones they quickly supplanted the horns and trumpets which had been previously popular.

Modern pipes are made of four main sections; the blowpipe, chanter, bag and drones. Traditionally, the bag would have been made from a full animal pelt, in the distant past goats, sheep, even cows and dogs were used to make this part of the bagpipes! In modern times, thankfully it is more common for synthetic materials to be used for the bag – with a fabric covering often made from tartan – either the official band tartan, or the regional sett, or for soloist pipers their own clan design. The bag is a reservoir for air blown by the piper; as the bag is continually squeezed under the piper’s arm while playing the air is forced out through the drones to create sound. Five sticks emerge from the bag, three drones, a chanter and a blowpipe, and we will look at the role each of these plays now. 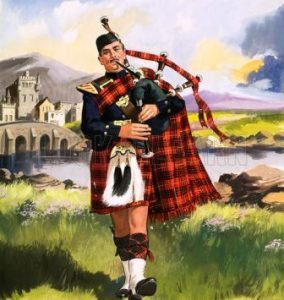 The blowpipe is used to inflate the bag; the pipe will prefill the bag before he starts to play then continue to keep filling the bag while playing. The blowpipe is usually made from hardwood though the exact wood type varies, and new techniques in the manufacture of this essential part of the instrument mean that pipers can fill bags more easily – leading to a smoother sound and more ease of playing. Unusually for a wind instrument, no reeds are played by the mouth directly, the blowpipe is just a filling device, and the reeds are contained within other areas of the pipes.

Also made from hardwood, the Great Highland Bagpipes has three drones – two tenors and one bass. Essentially, the drones create the music when the pipes are played; each one has a reed contained within and they can be tuned to different keys. As the air escapes the bag a constant low “droning” noise is heard, the distinctive noise of the bagpipes and the reason for this part’s name! When the bag is squeezed harder, more air escapes, increasing the volume and pitch of the drone, with the tone differing depending on the piper’s finger position.

The chanter is the most well-known part of the bagpipes and is essential for player input. Held by the piper in both hands, the chanter is a long stem drilled with holes acts as the finger-board. As the player moves his fingers to cover or uncover the holes, the airflow within the instrument changes and the notes differ, just like with instruments such as the clarinet or flute! It was traditionally made from Scottish woods such as holly or laburnum, then later from exotic hardwoods such as cocus wood or ebony, though nowadays synthetic materials which are easier to maintain are also popular. Chanters can also be purchased with a mouthpiece attached, separate from the bagpipes themselves, as practice instruments.

Using a practice chanter can be essential for new players. Playing the pipes properly is a whole body effort – you must blow air into the pipe constantly, squeeze the bag under one arm at a controlled level to ensure the air is escaping at the desired pressure, and keep up with precise patterns of covering and uncovering the holes of the chanter to create notes – all while keeping the drones balanced on your shoulder and making sure no part of the unwieldy and large pipes slips or is dropped by accident! Understandably, this is very difficult to master all at once, so practicing just on the chanter allows the piper to thoroughly learn the finger movements required without the pressure of managing everything else all at the same time. As they gain more experience they can move onto using the full pipes, though many pipers will return to the practice chanter when learning a new piece of music until they are confident of their performance.

Bagpipes are often played in Scotland as part of an ensemble of pipers and drummers. All the pipers play the Great Highland bagpipes and provide the melody and complexity of the music, with the mixed drum corps providing the rhythm from a selection of snare drummers, tenor drummers and one (or occasionally two) bass drummers. Musically, the band follows the direction of the pipe major, though when on parade the drum major may be responsible for leading the band on their route and keeping time with a mace. The pipers almost always play traditional arrangements, but the drum scores are often composed by the drum major himself – and the drummers are judged not only on performance, but also on how well their drumming complements and suits the traditional sections played by the pipers during competitions. 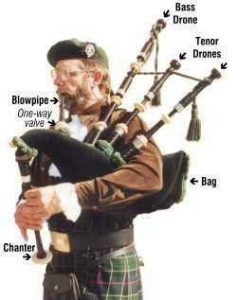 It is in pipe bands that the bagpipes military roots can be seen most clearly; with drums and pipes being truly historic in their use on the battlefields, to provide direction or convey commands, to boost morale or to strike terror into the hearts of enemies. All battalions of the Highland Regiment still have pipers, and the practice has also been adopted by many other Regiments, not to mention civilian entities such as police forces, fire brigades or universities.

As a solo instrument the Great Highland Bagpipes are also popular, from christenings to weddings, ceilidhs or funerals, even in modern times no Scottish life event is complete without a piper. Soloist pipers play an especially important part in traditional weddings, where they will often compere the event to keep things running smoothly (especially during the speeches!) as well as playing the bride down the aisle, providing accompaniment as the happy couple leave the church or registrars, and again when they enter the reception to be welcomed by their friends and family.

As Scotland continues to develop and grow into a strong 21st Century nation, the bagpipes continue to be a vital and vibrant part of its citizens lives; traditional soloists are everywhere, in our personal lives, working in partnership with Highland dancers, or even busking on the streets of our beautiful cities. Pipe bands bridge the traditional and the modern with innovative drumming and amazing displays of virtuoso technique. Even more encouraging, the pipes have been adopted by modern musicians in rock bands – or rather rock music has been adopted by pipers! With groups such as the Canadian Real MacKenzies, or Scotland’s own Red Hot Chilli Pipers blending electric guitars and punk vocals with the traditional sound of the bagpipes, it can truly be seen that this instrument goes from strength to strength and is one of Scotland’s best-loved and most defining features!

Story by Gordon B Kinnie

Have you visited Cape Breton?
Total Votes: 74
Polls Archive
×
You or your IP had already vote.