A Brief History of the Celtic Fiddle 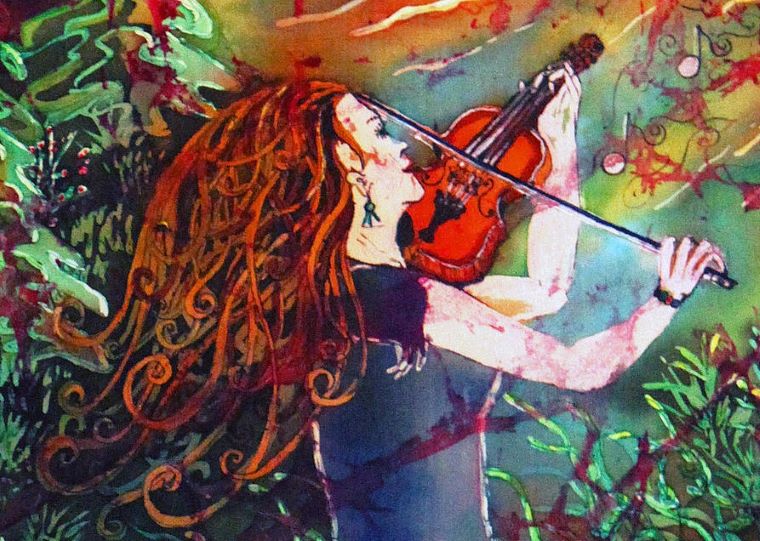 Although the fiddle was established in Irish traditional music before the Uilleann Pipes, the references to its predecessors do not date back as far as those of the pipes. Bowed instruments appear in numerous European carvings and illustrations dating from around 900 A.D. However, the interpretation of these carvings is difficult and the names given for the instruments differ and overlap in texts. The term ‘fiddle’ itself is somewhat general; it was originally the term for a twelfth century instrument, which was constructed of flat boards for the top, back and sides. This original ‘fiddle’ developed into the litre da braccio, the most significant predecessor of the violin. The term was later adopted for any member of the classical strings family, but has become particularly associated with the violin in the context of traditional music in Europe and America.

The earliest examples of a bowed instrument and of a bow itself date from the eleventh century and were excavated in Dublin in the eighteenth century. The bow is the earliest example of a medieval bow in Europe. According to “The Companion to Irish Traditional Music” ( Vallely 1999, pg 123) The earliest reference to the fiddle in Ireland is from a seventh century account of the Fair of Carman by O’Curry: “Pipes, fiddles, chainmen, Bone-men and tube players “. Also in existence in Ireland was the timpán, a bowed or plucked instrument with three to eight strings. In 1674 Richard Head wrote about Ireland “in every field a fiddle, and the lasses footing it till they were all of a foam”. In John Neal’s Dublin shop, there was an advert claiming, “There is fidles to be had”. This suggests the abundant availability of fiddles in Ireland. However, these fiddles bore no connection to the modern day fiddle, or violin. 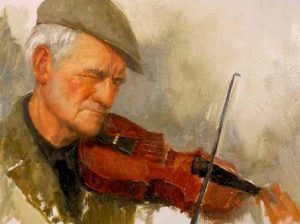 Gradually the finger board has become longer to facilitate moving into higher positions for greater range, and the neck has been made narrower to make this movement easier. In 1820 the chinrest was introduced and, later still, was followed by the shoulder rest.
These additions permit the player to grip the instrument with the chin, so allowing the hand to move more freely. However, owing to the nature of the melodies and the social context in which the fiddle existed in Irish traditional music, many of these developments were ignored for many years after their introduction: The dance tunes that were played on the fiddle rarely reached above the notes covered in first position (that is the low G to the upper B”) therefore the extended fingerboards and chin rest were considered unnecessary. Many players of traditional music today still play without chin and shoulder rests. Also the fiddle required great skill in making, so the peasantry, amongst whom the instrument was popular, did not have the skill to modify their instruments, nor could they afford to buy new ones.

I feel that this statement is slightly controversial in that, as previously stated in the same book, the fiddle existed in traditional Irish music before the pipes. Did the single-bowed triplet mentioned here develop after the introduction of the pipes or was it already in existence? Also previously stated in the same book is the fact that much Irish music was composed on the fiddle. So was the easy execution of triplets and rolls an advantage of the fiddle and a reason for its popularity, or were these techniques developed on the instrument, meaning it’s popularity was as a result of something else? One school of thought states that these ornamentation techniques were developed on the tin whistle and then transferred across to the fiddle, but that is unlikely, since the earliest tin-plate whistles appeared in Britain only from 1825 and were even later arriving in Ireland.

Although the wooden fiddle was long established and readily available in Ireland by the 1900s, a new style of fiddle was adopted by the travelling community and the peasantry: the tin fiddle. This was most popular in Donegal as it was very cheap to construct, was quieter than its wooden counterpart and very easy to mend. This was an important factor when one considers that in remote areas such as Donegal, access to those with the expert knowledge and skill needed to repair a timber instrument would have been limited. The properties also made it the perfect instrument for the children and learners in the travelling and peasant communities where houses were small and a loud timber instrument at night amongst large families and close neighbours would have been objectionable. Many of the great travelling fiddlers played these instruments, such as the Dohertys and their in-laws, the McConnells. Indeed Johnny Doherty was one of the most influential fiddlers in Donegal in the last century. He came from a family of tin smiths, whose ” skill in working with thin-gauge sheet metal – typically tinplate – in times of high demand for fiddles was recruited for fiddle construction too. A skilled maker could turn out a fiddle body in two hours, to it was fixed either a home-made neck and fingerboard, or more commonly, a discarded neck from a damaged timber fiddle, with F-hole chiselled in the belly. ”

The tin fiddle was also adopted by sailors and those who emigrated from Ireland as it was able to withstand the horrendous conditions on ships. Many people attribute the dispersion of Irish music in part to this usage of tin fiddles. Some tin fiddles are still produced today in Donegal, but these levels of production do not even come close to matching those of the early twentieth century. Many of the tin fiddles made by the Doherty, McConnell and Irwin families still survive and are held in revere by their owners. Also still in existence is a single brass fiddle, often seen to be the icon of Donegal fiddle tradition, but which was probably popular right across the island.
Similar in construction to the tin fiddle, the Stroh or phono fiddle was used until 1926 in wax cylinder recordings. Invented by Augustus Stroh, this metal fiddle had its own acoustic horn and was designed to provide a sharper sound for recordings. However, as discs overtook the wax cylinder recordings, the production of Stroh fiddles ceased, and today they are a rarity.

Make it Manhattan this weekend! www.manhattanirish