A Brief History of Wales 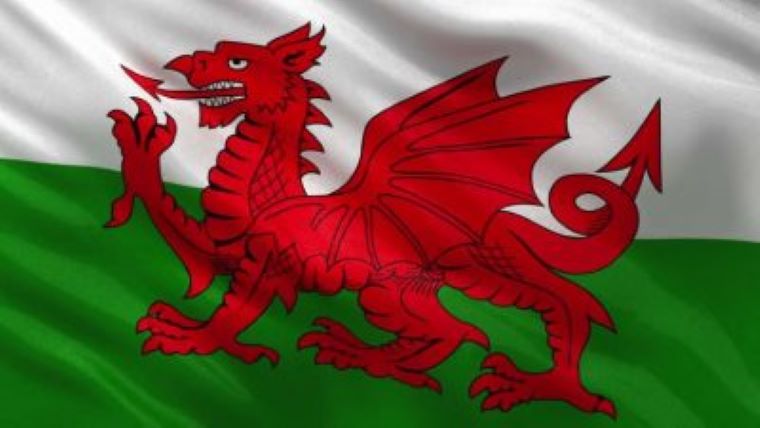 One of the great Celtic nations, Wales has a rich and robust history.

During the last ice age people hunted reindeer and mammoth in what is now Wales. When the ice age ended around 10,000 BC new animals appeared in Wales, such as red deer and wild boar. Stone age hunters hunted them both. They also gathered plants for food.

In about 4,000 BC farming was introduced into Wales, although the people still used stone tools. About 2,000 BC people learned to use bronze. Then, about 600 BC Celts migrated to Wales, bringing iron tools and weapons with them. The Celts were a warlike people and they built many hill forts across Wales. However, they were also skilled craftsmen with iron, bronze and gold.

In 43 AD the Romans invaded Southeast England. They began the conquest of Wales about 50 AD, but it took several decades. In 78 AD the Romans captured Anglesey, the headquarters of the Celtic priests, the Druids. That effectively ended Celtic resistance.

Afterwards Wales was firmly under Roman rule. The Romans created a network of forts across Wales to control the Celtic tribes. Sometimes towns grew up outside the forts as the soldiers provided a market for the townspeople’s goods. The most important Roman town in Wales was Caerwent. To us it would seem tiny, with only a few thousand inhabitants but towns were very small in those days. Other Roman towns were Maridunum (Carmarthen) and Segontium (Caernarfon). The Romans also built a number of villas in Wales.

Christianity arrived in Wales in the 3rd century. We know that two Christians named Julius and Aaron were martyred at Caerleon. However persecution of Christians ceased in 313.

However in the 4th century the Roman Empire went into decline. The last Roman soldiers left Britain in 407 AD. Afterwards the Roman way of life slowly vanished. Wales split into separate kingdoms. 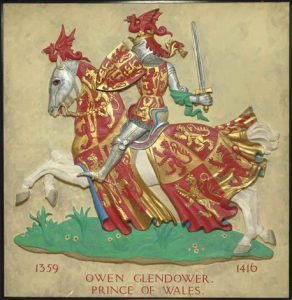 WALES IN THE MIDDLE AGES

Meanwhile the Saxons invaded eastern England. They marched westwards and by the 7th century AD they had reached the borders of Wales. Centuries of fighting between Welsh and Saxons followed.

Then in the 9th century the Vikings began attacking Wales. However, a man named Rhodri ap Merfyn or Rhodri Mawr (Rhodri the Great) became king of Gwynedd in the northeast. In 855 he also became king of Powys in eastern Wales. In 856 he won a great victory over the Danes. However the Vikings continued to attack Wales, at intervals, until the end of the 10th century.

When William the Conqueror became king of England in 1066 he did not attempt to conquer Wales. However, he did grant land along the English-Welsh border to powerful Norman lords. These lords sometimes encroached on Welsh territory of their own accord.

During the reign of William II (1087-1100) the Normans continued their attacks on Wales. However, the Welsh resisted bitterly and most of Wales remained independent.

However, in those parts of Wales they controlled the English lords created towns. The most important was Cardiff. To us these early Welsh towns would seem tiny. They often only had several hundred inhabitants. The English lords also founded many monasteries in Wales.

In the mid-13th century one man managed to make himself ruler of most of Wales. In 1255 Llewellyn became king of Gwynedd. The Welsh kingdoms of Powys, Deheubarth and Glamorgan recognized Llewellyn as their lord. In 1267 King Henry III of England made the Treaty of Montgomery with Llewellyn. According to the treaty Llewellyn was made Prince of Wales. However, he agreed to become the English king’s vassal.

However, in 1272 Edward I became king of England. He was determined to rule all of Great Britain. Since Llewellyn was his vassal Edward summoned him to do homage. Each time he was summoned Llewellyn made some excuse. In 1276 Edward declared him a rebel and raised an army, which marched into Wales. In 1277 Llewellyn was forced to submit and to surrender some territory to the English. However in 1282 the Welsh rebelled.

Llewellyn was killed fighting the English in December 1282 but his brother Dafyd carried on the struggle. However, Dafyd was captured in June 1283 and he was executed in October 1283. The rebellion was crushed.

Edward was now ruler of Wales. English law was imposed upon the Welsh and Edward built a network of castles to control the people. Alongside the castles Edward created new towns.

In 1294 the Welsh rose in rebellion. However, the rebellion was crushed in 1295. Yet in 1301 to try and gain the loyalty of the Welsh Edward made his son, who also called Edward, Prince of Wales.

In 1348-49 Wales, like the rest of Europe, was devastated by the Black Death, which probably killed one third of the population.

Then in 1400 Owain Glyn Dwr led another rebellion. Between 1401 and 1403 the rebels steadily advanced, capturing Welsh towns and defeating the English in battle. In 1404 Owain captured the castles at Aberystwyth and Harlech. However, in 1405 and 1406 the English began to regain ground. The English recaptured Aberystwyth castle in 1408 and Harlech castle in 1409. Owain and his followers fled to the mountains. They continued to fight until 1413 when Owain Glyn Dwr disappeared from history.

In the late 15th century towns and trade in Wales flourished. Much of the countryside also grew more prosperous.

Then in 1485 Henry Tudor landed with an army at Milford Haven. He marched through Wales into England and after the battle of Bosworth he became king.

WALES IN THE 16th CENTURY AND 17th CENTURY

The 16th century brought religious changes to Wales. In 1517 Martin Luther, a German, started the Reformation. He demanded changes in Christian belief and practices. In 1534 Henry VIII broke with the pope and made himself head of the church in England and Wales.

In 1536 Henry dissolved the smaller monasteries in Wales. The rest were dissolved in 1539. Meanwhile Protestant ideas were spreading through Wales. However, although Henry made himself head of the church he was not willing to allow too many changes. In 1542 a Protestant called Thomas Capper was burned to death in Cardiff.

In 1553 Henry’s daughter Mary became queen. She tried to undo the changes in religion and restore the old Catholic religion. During her reign 3 Protestants were burned to death in Wales.

However, when Mary died in 1558 her sister Elizabeth became queen. Things changed again. Elizabeth re-introduced Protestantism. In 1588 the Bible was translated into Welsh.

While all the religious changes were happening another change took place in Wales. In 1536 the English parliament passed an act of Union. As a result, Wales was united with England. The Welsh were given equal citizenship and were allowed to send MPs to parliament. English law came into force throughout Wales.

Meanwhile, during the 16th century Wales was gradually growing richer. Most people made their living from farming and cattle herding was very important. However, trade and industry continued to grow. Wales exported more and more wool and woolen cloth. Meanwhile coal mining flourished. The Welsh iron industry also grew.

In 1642 came civil war between king and parliament. Wales was firmly in the royalist camp (except for the town of Pembroke which supported parliament all the way through the war) and many Welsh soldiers fought in the king’s army. However, by 1644 the king was losing the war. In September the royalist were badly defeated at the battle of Montgomery. In 1645 the parliamentary army captured south Wales.

In 1648 Parliament decided to disband its army. However, many soldiers had not been paid for a long time and they realized they would not be paid the money they were owed if they disbanded. The commander of soldiers in Pembroke was called Poyer and he rebelled. Meanwhile the king did a deal with the Scots, who promised to restore him to his throne. Poyer threw in his lot with the king but soldiers loyal to parliament marched to Wales and crushed the rebellion.

WALES IN THE 18th CENTURY

In the early 18th century Wales continued to grow more prosperous and a number of splendid mansions were built.

Meanwhile the SPCK founded many charity schools in Wales. They were given a tremendous boost by a man named Griffith Jones (1683-1761). He created circulating schools. These were mobile schools. Teachers would set up a school in one place for 3 or 6 months then move on. The movement helped to create widespread literacy in Wales.

Also, in the 18th century Wales underwent a religious revival. In 1735 the Welsh Methodists were created by Howel Harris (1714-1773) and Daniel Rowland (1713-1790). At first the Methodists remained members of the Church of England but they also held their own meetings. However, some of the Church of England clergy disliked Methodism. Eventually in 1811 the Methodists began to ordain their own ministers and they became a separate church.

In the mid-18th century Wales was still very much a rural society. Welsh towns were very small, even by the standards of the time and the vast majority of people lived in the countryside. Most people lived by farming. However, at the end of the 18th century all that began to change. The industrial revolution transformed everyday life. People flocked to work in the towns. 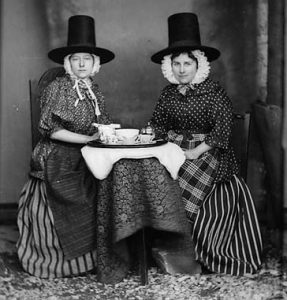 WALES IN THE 19th CENTURY

In the 19th century coal mining and iron working in Wales boomed. Other metal industries in Wales, such as copper, zinc and tin plating thrived in the 19th century. So did slate quarrying. There was also an important woolen industry in Wales.

There was also unrest in the Welsh countryside. There were riots in the years 1842-1844 known as the Rebecca riots. Men dressed as women and called themselves Daughters of Rebecca. The target of their rage were tollgates. (Many roads in Wales were owned by Turnpike Trusts and you had to pay a toll to use them).

However later in the 19th century things improved. Wages rose and hours of work were cut. Towns became healthier when sewers were dug.

Furthermore, in the 1840s railways were built across Wales. They made it much easier for visitors to reach Wales. Tourism became an important Welsh industry.

WALES IN THE 20th CENTURY

The 1920s and 1930s were years of hardship for Wales. There was mass unemployment at that time. Unemployment had already reached 23% of the Welsh workforce in 1927. In the 1930s it grew worse and in parts of Wales half the workforce was unemployed.

During World War II both Cardiff and Swansea were bombed by the Germans.

On the other hand, full employment returned with the Second World War and unemployment remained low through the 1950s and 1960s. However, the traditional Welsh industries such as coal and iron and steel continued to decline and more and more collieries were closed.

Meanwhile in 1999 the new Welsh Assembly opened. In 2011 the people of Wales voted that the Welsh Assembly should be allowed to pass laws without permission from Westminster.