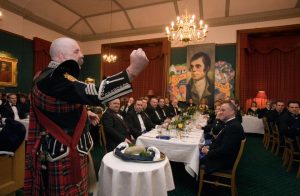 “Piping” of the haggis; Everyone stands as the main course is brought in. This is always a haggis on a large dish. It is usually brought in by the cook, generally while a piper plays bagpipes and leads the way to the host’s table, where the haggis is laid down. He/she might play ‘A man’s a man for a’ that’, ‘Robbie Burns Medley’ or ‘The Star O’ Robbie Burns’. The host, or perhaps a guest with a talent, then recites the Address to a Haggis;

Fair fa’ your honest, sonsie face,
Great chieftain o’ the puddin-race!
Aboon them a’ ye tak your place,
Painch, tripe, or thairm:
Weel are ye wordy o’ a grace
As lang’s my arm.


The groaning trencher there ye fill,
Your hurdies like a distant hill,
Your pin wad help to mend a mill
In time o’ need,
While thro’ your pores the dews distil
Like amber bead.


His knife see rustic Labour dicht,
An’ cut you up wi’ ready slicht,
Trenching your gushing entrails bricht,
Like ony ditch;
And then, O what a glorious sicht,
Warm-reekin, rich!


Then, horn for horn, they stretch an’ strive:
Deil tak the hindmaist! on they drive,
Till a’ their weel-swall’d kytes belyve,
Are bent like drums;
Then auld Guidman, maist like to rive,
“Bethankit” hums.


Is there that o’re his French ragout
Or olio that wad staw a sow,
Or fricassee wad mak her spew
Wi’ perfect scunner,
Looks down wi’ sneering, scornfu’ view
On sic a dinner?


Poor devil! see him ower his trash,
As feckless as a wither’d rash,
His spindle shank, a guid whip-lash,
His nieve a nit;
Thro’ bloody flood or field to dash,
O how unfit!


But mark the Rustic, haggis fed,
The trembling earth resounds his tread.
Clap in his wallie nieve a blade,
He’ll mak it whistle;
An’ legs an’ arms, an’ heads will sned,
Like taps o’ thristle.


Ye Pow’rs wha mak mankind your care,
And dish them out their bill o’ fare,
Auld Scotland wants nae skinkin ware
That jaups in luggies;
But, if ye wish her gratefu’ prayer,
Gie her a haggis! 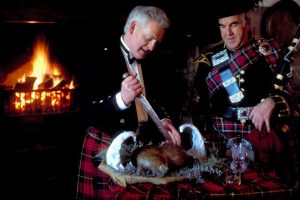 At the line His knife see rustic Labour dicht the speaker normally draws and cleans a knife, and at the line An’ cut you up wi’ ready slicht, plunges it into the haggis and cuts it open from end to end. When done properly this “ceremony” is a highlight of the evening. 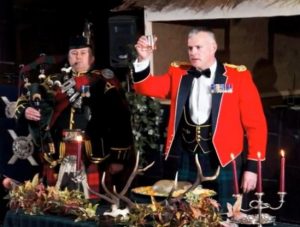