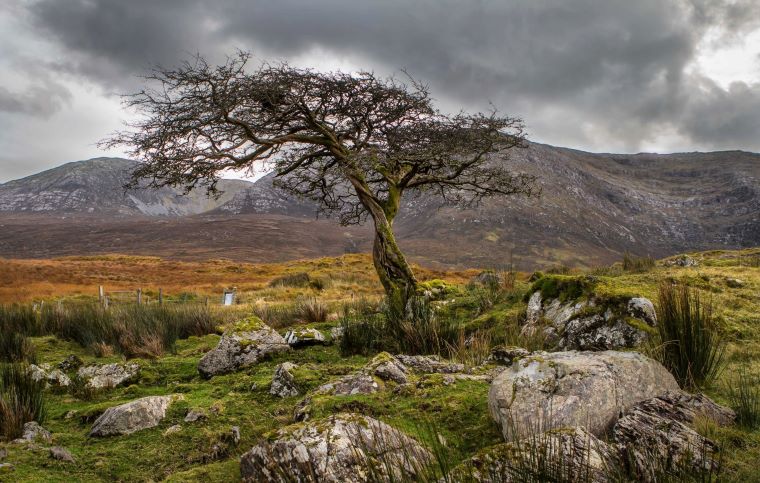 Recently, while returning home to Dublin from the West of Ireland, my family and I stopped for a picnic lunch in West Meath at an abandoned farmhouse in a very rural setting. My brother Peter had been here before and suggested it as a quiet and peaceful place to stop. From a narrow country road, we turned in and parked in a clearing between the house and some old sheds, one of which was open revealed a portion of an early families farming history. A wooden spiked tooth harrow is set on top of an old horse drawn plow. The cone from an old gramophone, along with an old bicycle, accompanies the layers of history hidden here, and for now exposed to the destruction by time and the elements.

Exploring the grounds, we came across a Hawthorn tree in a field close to the house. The Hawthorn and the Blackthorn play an important role in Celtic Mythology. It was always believed that the lone hawthorn standing in the middle of a field was treated with much respect and some suspicion by farming communities. Whilst it was thought to be auspicious, bringing good fortune and prosperity to the landowner, it was also thought to belong to the magical folk of the Otherworld, the Sidhe. As such, it was never to be cut or harmed for fear of bringing their wrath upon the perpetrator. This particular tree had a massive rock set up against its trunk apparently to protect the tree when the field was being plowed and, in turn, spare the home-owner and his family any mischief or grief from the fairies.

With the place all abandoned and neglected for what appeared to be for a considerable time it aroused my curiosity as to what ever happened to its occupants and why so much was left behind.

Ireland is filled with its lonely places and forgotten or lost small family histories. 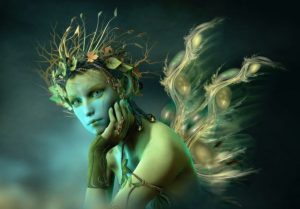 The Hawthorn is regarded as a very sacred tree to the fairies and is considered to have the most sinister reputation in Celtic tree lore. Because these trees flower in the spring, they were associated with the festival of Bealtaine, a sacred time In Irish mythology. The beginning of the summer season started with the Fire Festival at Beltane. Great bonfires would mark a time of purification and transition, heralding in the season in the hope of a good harvest later in the year, and were accompanied with rituals to protect people from any harm by otherworldly spirits. Serious ramifications were known to occur when one of these trees are cut down to clear the land. Farmers who have caused such destruction could suffer great misfortune for the rest of their days.

Those that heeded the fairy warnings would protect their tree by placing rocks and boulders around its base to protect the trunk from damage when the farmer plowed his land. This belief was taken so seriously that, in 1999, the upgrading of the National route from Limerick to Galway was delayed, rerouted, and eventually opened nearly 10 years after it was supposed to have started. The Clare County Council as part of their Contract had to protect the fairy tree ‘access ,which is not permitted within a minimum of a 15 feet radius, and a protective fence has been erected around it.

The Hawthorn was often seen as a gateway into the fairy realms.

Thomas the Rhymer, a Scottish poet in the 13th Century, claimed to have met the Fairy Queen by a Hawthorn bush from which a cuckoo was calling. She led him into the Otherworld for a short visit, but when he emerged, he found that seven years had passed.

On a darker note, the 5th century St Augustine of Hippo decreed that un-baptized babies could not be buried in church graveyards. It was believed that instead they would go to Limbo and be lost forever. The Limbo of the Infants was a realm of the afterlife, exclusively for the souls of un-baptized babies. These souls were believed to be in a blissful state, but they stopped just short of the full bliss of heaven. This was cold comfort for many bereaved parents. Limbo was taught up until the 1990s, and I remember the scary tales told by the Nuns – who, at that time, were considered the brides of Christ – rather chilling stories of the souls of the un-baptized destined to carry a candle for eternity, looking for the mercy of God. What good God would be capable of such cruel mercy on an innocent child?

Babies who died before baptism would be brought in secret – away at night from the public for a private burial, carried out only by the father and male relatives. Women had no role to play and mothers were not present. The deceased would be brought to the ruins of an old church, whether it was Catholic or Protestant. Both were considered consecrated grounds that would allow the mother and family some peace of mind. A folk belief was that if the mother brought the child herself it would increase the chances of her bringing another in the future.

When all else failed in locating a burial placement according to location, the deceased would be buried beneath a Hawthorn tree with the belief that the fairies would care for these souls as their own.  ~ Story by Paul Nixon