A Walking Tour of Irish Havana 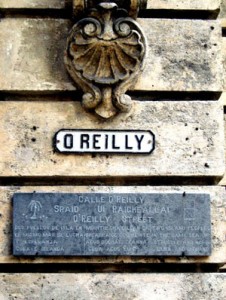 Havana, the fascinating UNESCO heritage site has drawn visitors from all over the world intrigued by the interesting history and architecture of Cuba’s capital. As journalist Maria Watson reports, this tour – which starts at the Capitolio and ends at Café O’Reilly – offers a glimpse of the shared history of the two island nations of Ireland and Cuba.

Behind the Capitolio, to the west and near the entrance to Havana’s China Town is a curious collection of rusting locomotives, too heavy to easily move. They remain there as a testament to the original usage of the Capitolio site as the Villanueva Railway Station. Irish labourers were contracted to help build Cuba’s first railroads alongside other poorly paid bonded workers. The brutal working conditions and insufficient food sparked a strike lead by the Irish and Canary Islander workers which was violently suppressed. Upon completion of their employment, those that survived (as many died of hunger and exhaustion) found themselves abandoned without resources to leave Cuba.  More information about the building of Cuba’s railways and restored locomotives can be viewed at the Havana Rail Museum, at the Cristina Station which replaced the Villanueva Station in 1912.

To the east if the Capitolio is Parque Central . The magnificent building overlooking the west side of the park is the Great Theatre of Havana built in 1915 as the Palacio del Centro Gallego (Palace of the Galician Centre).  Directly across is the equally impressive National Museum of Fine Arts  built in 1927 as the Havana Palacio del Centro Asturiano (Palace of the Asturian Centre). The nations of Asturias and Galicia, now part of Northern Spain, are considered celtic.   The grandeur of these two buildings and their important location in the heart of Havana demonstrates the influence these immigrants had in shaping the island’s future.  The surname Castro is of Galician origin.  Recent genetic tests of the people of Northern Spain show links to the Irish and the other celtic cousins of the Atlantic rim nations.   The tradition of folk music and dance from Asturias and Galicia was exported to Spanish colony of Cuba. The gaita is a Spanish bagpipe and today in Havana there are many gaita players and dance groups which preserve the tradition of their celtic ancestors.

Near Parque Central is the Hotel Telegrafo, the blue and white hotel at the corner of Paseo de Prado and Neptuno where Irishman Ed Donovan moved the furnishings and contents of his entire bar from Newark, New Jersey when prohibition shut down all the drinking establishments.  Prohibition was a boon for the entrepreneurs of the liquor, beer and wine trade in Cuba.  Donovan wasn’t he only Irishman to move his bar. Another Irish- American Pat Cody moved his popular New York saloon, Jigg’s Uptown Bar and reopened at Lutz and San Pedro in Havana as a club and eatery called Maggie’s Bar and Jiggs Café.  It is said that on Pat Cody’s birthday all the drinks were free. The walk continues northward on the tree-lined Prado, an elegant promenade guarded by lion statues cast from the metal of old cannons.  Turn right on Trocedero and walk eastward. You will see the entrance of the Sevilla Hotel, the setting for the 1959 movie “Our Man in Havana” filmed shortly after the Cuban Revolution.  The hotel was purchased by Canadian John McEntee Bowman and re-opened as the Sevilla-Biltmore.

It was operated by Irish-American Charles Francis Flynn. The hotel has a fascinating history replete with gangsters, glamorous socialites, famous actors and actresses.  The hotel was a favorite hang-out for members of organized crime who controlled much of the city’s gambling and nightclubs. These establishments catered mostly to Americans.  Ambitious plans to raze much of Havana’s historical areas to build new hotels and casinos were thwarted by the revolution.  As well as the dictator Fulgencio Batista , who left Cuba on January 1, 1959 when the victory of the rebel forces was imminent, so too fled the members of the mob. They relocated their dubious enterprises to Nevada and the present day Las Vegas provides visitors some insight to what might have become to the cherished UNESCO heritage site of Havana had history been different.  Perhaps the most famous Irish-American to visit Havana for the notoriously wild nightlife before the revolution was John F. Kennedy when he was a senator in 1957 and there exists some salacious accounts of his trip. Later, as president during the height of the cold war, Kennedy imposed an embargo of Cuban goods as he viewed Cuba a satellite of the Soviet state but not before acquiring a large quantity of quality Cuban cigars for his personal use. Decades after the cold war and the fall of the Soviet Union the embargo still remains in place. Americans cannot buy Cuban made cigars or engage in trade with Cuba. The only American visitors who can legally travel to Cuba must obtain special permits from the United States government of risk stiff penalties.

The walk continues eastward until the end of Trocedero then turn left on Avenida Belgica . Walking northward on Avenida Belgica you will see on the left the Granma Memorial. The original boat the Granma, which transported 82 revolutionaries from Mexico to Cuba is on display in a glass enclosure visible from the street. Notably on this boat were the Cuban revolutionary heroes  Fidel Castro, Raúl Castro, Camilo Cienfuegos  and  Che Guevara, the latter fighter being of Irish descent.  Born Ernesto Guevara Lynch, his grandmother Anna Isabel  Lynch was from Galway, Ireland. Che’s father later stated famously “the first thing to note is that in my son’s veins flowed the blood of the Irish rebels.”

Continue the walk north, turn left on Cuarteles, continue to Cuba St. On Cuba St. is the Hotel Palicio O’Farrill  a boutique hotel operated by the the Habaguanex group which has beautifully restored the palace of Don Jose Ricardo O’Farrill, the great-grandson of Don Ricardo O’Farrill and O’Daly whose family was from County Longford, Ireland. The O’Farrill family became vastly wealthy as sugar and slave traders. The incredible opulence of what once was a private family home has been preserved with a careful restoration overseen by   The City Historian Eusebio Leal’s Department of Architecture Office.

Continue walking on Cuba St until Chacon St. Turn left and proceed east you will see the Old Havana jail, and the view across the water of the El Morro fortress, both symbols of Spanish military rule of Colonial Havana. The lighthouse at the fortress was once called O’Donnell’s Lighthouse after Captain General Leopoldo O’Donnell,a relative of Red Hugh O’Donnell  Many Irish names were represented in the Spanish military force as Spain hired them as soldiers for their skill and determination. The soldiers were respected and often gained high rank. In 1598 Diego Brochero de Anaya wrote the Spanish King Philip III: “that every year Your Highness should order to recruit in Ireland some Irish soldiers, who are people tough and strong, and nor the cold weather or bad food could kill them easily as they would with the Spanish, as in their island, which is much colder than this one, they are almost naked, they sleep on the floor and eat oats bread, meat and water, without drinking any wine.”  Four Governors, the Captain Generals of Cuba were of Irish origin Nicolás Mahy, Sebastián Kindelán, Leopoldo O’Donnell and Luís Prendergast.

Turn right on Tacon proceed to Seminario de San Carlos y San Ambrosio. On both sides of the main doors  are busts of the respected educators and philosophers of the seminary. José Agustín Caballero and Félix Varela. Felix Varela, a humble Cuban priest born in 1788 was later known in life as the “The Vicar to the Irish”. A brilliant polymath gifted in science, music and languages, Varela learned the Irish language so he could better minister to the poor Irish immigrants of New York City that comprised most of his parish. He found himself in exile and fled to America when Spain issued a death warrant for Varela after he published his views advocating the Independence of Cuba from Spain.  Varela championed causes benefiting the poor, urged for the abolition of slavery and his memory is honoured today as an early advocate for conscientious social reform. To the south of the seminary is the Catedral de Habana. Ireland is inextricably linked to Cuba through shared religious history as persecuted Irish Catholics sought refuge in Spain and were awarded citizenship by the sympathetic Spaniards, settling there and leaving Irish descendants, some of whom colonized the island of Cuba.

Continue the walk on Tacon until you come to O’Reilly Street. Here you will see a plaque under the street name in English, Irish and Spanish “Two island peoples in the same sea of struggle and hope: Cuba and Ireland” acknowledging the parallels in the histories of Ireland and Cuba in their struggle to be free from foreign domination. Irish revolutionary and third president of Ireland Eamon De Valera was born to an Irish- American mother Catherine Coll and it is believed his father Juan De Valera was Cuban, another interesting link between the two island nations. O’Reilly St. was named after Alejandro O’Reilly, and Irish born soldier for Spain who gained high rank and was second-in-command in Cuba. After the British successfully sieged Havana, he enacted sweeping reforms once Havana was once again under Spanish rule. Never again would Britain rule Cuba. The Spanish military rule of Havana continued until the War of Independence. One Irish-American  scofflaw who aided the revolutionary forces during the struggle for Cuban Independence was a sea Captain named Johnny “Dynamite” O’ Brien, a New Yorker of Irish descent nicknamed  after the dangerous cargo of ammunitions he would deliver to the rebel forces. He successfully evaded capture by the frustrated Spanish forces and died an old man in America after a life full of adventure and exploits.

Continue walking on the Tacon until the Plaza de Armas. The parade square used by the military. The Palacio de los Capitanes Generales  faces the square, in front is a wooden street meant to dampen the noise of the horse and carriage traffic. Now the museum of the city it was the home of the Captain Generals, some of Irish descent as discussed earlier.

The southern side of building is bordered by Obispo and at 67 Obispo was born Julio Antonio Mella a founder of the Cuban Communist party. His mother was Irish born Cecilia McPartland and he is regarded as a hero in Havana. His remains are entombed in a monument in front of Havana’s University where as a student leader he became a great threat to Cuban president  Gerardo Machado’s dictatorship and was forcibly exiled to Mexico where he was assassinated under mysterious circumstances.

Walk west on Obispo until San Igancio, turn right and walk north back to O’Reilly St. At the corner of O’Reilly and St. Ignacio is the bar Café O’Reilly, upstairs a favorite place for celic musicans to have sessions during the annual Celtic Festival held each spring, CeltFest Cuba.