All About the Kilt 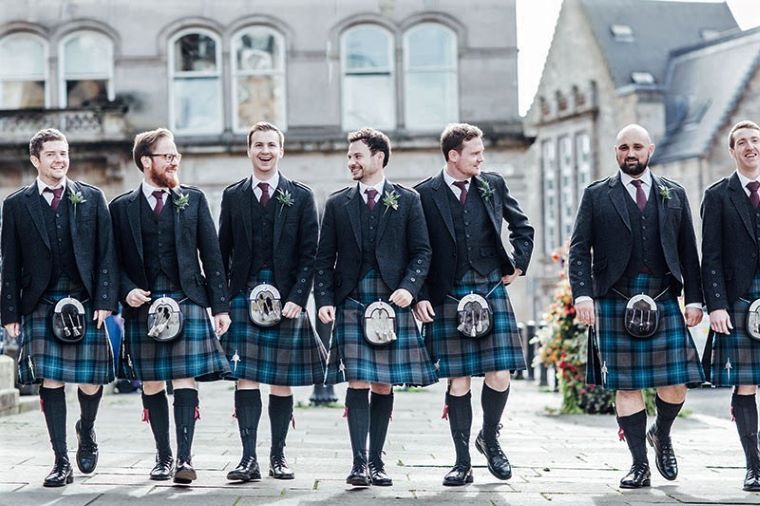 The Scottish kilt is one of the most recognizable forms of national dress in the world and for a Scotsman it is a symbol of honour and patriotism.

The term “kilt” itself actually means to tuck up clothing around the body, and is a derivation of an old Norse word kjilt, which means pleated.

The Scottish kilt’s origins date back to the 16th century, where it was originally a full length garment, known as the great kilt or belted plaid which used to be worn with the top half draped over the shoulder, as a cloak.

Actually one of the earliest references to the Scottish kilt came from Ireland. In 1594 a group of Scottish soldiers from the Hebridean islands had gone over to Ireland to fight for Red Hugh O’Donnell.

“They were recognized among the Irish Soldiers by the distinction of their arms and clothing, their habits and language, for their exterior dress was mottled cloaks of many colours (breacbhrait ioldathacha) with a fringe to their shins and calves, their belts over their loins outside their cloaks.

Many of them had swords with hafts of horn, large and warlike, over their shoulders. It was necessary for the soldier to grip the very haft of his sword with both hands when he would strike a blow with it. Others of them had bows of carved wood strong for use, with well-seasoned strings of hemp, and arrows sharp-pointed whizzing in flight.” (McClintock, Old Highland Dress, The Life of Aodh Ruadh O Domhnaill)

For as long as history large numbers of Scots have been willing to fight as mercenaries in foreign lands. This continues more or less to the present day. The image on the right is from Wikipedia. It shows kilt wearing Scottish Soldiers in the service of King Gustavus Adolphus of Sweden in 1631. 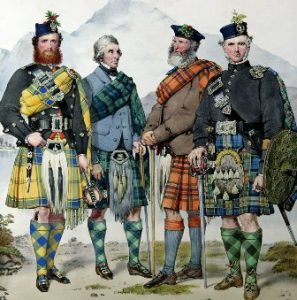 The small kilt, similar to the current form, was developed and became more widespread between the late 17th and early 18th century and became known as the philabeg (Gaelicfeileadh beag). By 1746 this style of kilt was utilized and was quite popular, especially throughout the Highlands and central Scotland. However, King George II, imposed the dress act in 1746, primarily to suppress Highland culture.

This act in essence outlawed the wearing of any items of Highland dress, which included the kilt. The Highland regiments were the only ones excluded from the act’s repression.

“… no man or boy within that part of Great Britain called Scotland, other than such as shall be employed as Officers and soldiers in His Majesty’s Forces, shall, … wear or put on the clothes commonly called Highland Clothes …”

This marked a period during which the kilt was generally worn as a fashionable item by Scottish romantics and also as a form of protest against the English based government’s repression. Penalties for those who defied the ban included six months imprisonment, if it was a first offence or for those who re-offended, seven years transportation to the far off colonies.

The ban on the kilt remained for 35 years before it was lifted in 1782. The lifting of the ban heralded a renaissance for the kilt which eventually became identified with the whole of Scotland. It was during this time that clan identification was developed. This included the creation of specific tartan colours for each clan, a move away from the traditional form of tartan being relevant to a particular region of the country.

One of the defining features of this philabeg style of kilt (compared to the modern style) was the fact that the kilt was folded, which was the case until around 1792, at which point the first kilt to have sewn pleats was introduced. This marked the birth of the modern day Scottish kilt.

It is worth noting that original kilts were not tartan (or plaid in the USA). They were self coloured garments as the technology to produce multi coloured fabrics had not yet evolved. When weaving and dyeing techniques were improved tartan patterns did become available but the original tartans were limited to black and white and the dull browns and greens that could be manufactured from the natural dyes available at that time. 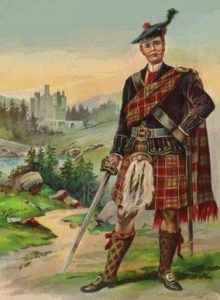 It was not until the dyeing processes were improved in the 1800s that the colourful tartans with which we are familiar today started to appear. Many tartans come in “ancient” and “modern” versions. The ancient versions tend to be duller, probably as a result of the limitations of the old dyeing process.

Modern day kilts are usually cut from approximately 8 yards of fabric and come with approximately 29 pleats. A woolen garment, with a specific tartan design, which relates to the clan, the kilt is one element, which also includes a sporran, a pouch made from fur or leather with decorative tassels and is utilized for storage.

Today’s kilt is normally worn as more formal gent’s dress-wear as opposed to the practical garment from which it evolved. At most formal functions in Scotland at least some of the male guests will be dressed in kilt outfits. On all occasions where evening dress such as a tuxedo is required the kilt can replace this.

Kilt outfits are gaining in popularity and most Scottish weddings are now conducted with the groom, best man and lots of the male guests in kilts, which are often hired for the occasion.

This surge in popularity is in contrast to many other kinds of traditional wear, even lounge suits, which are increasingly being seen as old-fashioned by today’s trendy young men. The kilt outfit of your choice is readily available to buy or hire everywhere and the kilt has once again started to evolve, this time into a fashion garment worn at every opportunity by many well known celebrities both Scots and non-Scots.

In recent years the kilt has increasingly been worn as every day or casual wear. It can be worn with a traditional, Ghilllie or Jacobean style shirt, a wool sweater or even a tee shirt. Some young (and not so young) Scot’s guys even wear a kilt as casual dress with boots, heavy woolen socks and t-shirts. It is also more or less the required dress of the “Tartan Army”, Scotland’s soccer team fans.

There are many occasions where a kilt is appropriate, and your kilt outfit will be a great investment.