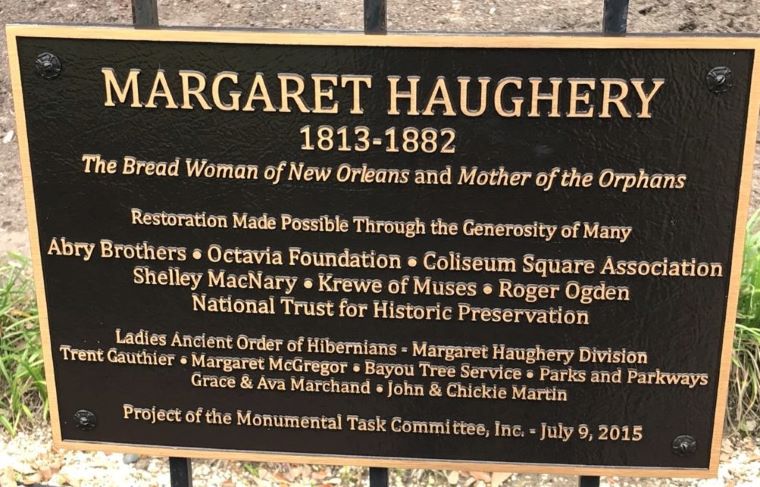 Also known as the ‘Angel of the Delta’ and the ‘Mother of Orphans’, Margaret Haughery dedicated her adult life to tending to the poor and hungry of Louisiana, with a particular focus on the needs of orphans.

Born Margaret Gaffney into poverty in Tully, Co Leitrim in 1813, her parents relocated with their three youngest children to the New World in 1818 after a succession of bad summers left their land even harder to farm than before.

The journey to America took six months, leaving passengers despairing of ever seeing land again as their daily rations were cut back till finally they were only given a single a cracker a day to eat.

The ship eventually docked in Baltimore, but unfortunately their life did not get much easier. Margaret’s father – like many immigrants from rural Ireland – found city life hard to adapt to and work difficult to find. Nevertheless, he secured work as a carter and had nearly saved enough money to pay the fare for his three oldest children to make the journey from Leitrim to Maryland when he fell ill with yellow fever. He and Margaret’s mother both died within a matter of weeks and all their worldly belongings were burned to prevent the spread of the disease with the exception of the family Bible, which was found 27 years later and returned to Margaret.

Aged only nine, Margaret found herself all alone in the world. Her sister Kathleen had died not long after their ship docked in Baltimore and her brother Kevin disappeared without a trace. However, a Welshwoman who had made the voyage with the Gaffney family took pity on her and took her in. Most likely Margaret worked for her as a domestic servant and she never went to school. 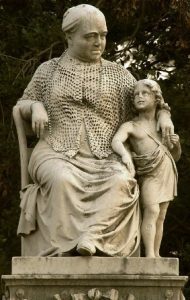 In 1834 she married her husband, Irishman Charles Haughery, but his health was poor. They moved to New Orleans, where it was hoped the sun would help him. However, Charles was restless and yearned to return to Ireland, delaying the journey only for the birth of their daughter, Frances.

When he did finally make the trip home it did little to improve his health. News of his death took several months to reach Margaret in New Orleans. Worse still, their child Frances became sick died shortly thereafter leaving Margaret all alone for the second time in her life.

“My God! Thou hast broken every tie: Thou hast stripped me of all. Again I am all alone,” she wailed. But she quickly determined that she would devote herself to the needs of others and despite being left penniless by Charles she began to volunteer in what little spare time she had with the city’s orphans.

She worked as a laundress, slowly saving her wages, and eventually bought two cows. Margaret was clearly quite the business woman and by the time she was 40 she’d increased her herd to 50 and set up a bakery as well. Many of her clients become generous donors to the children she worked with in her spare time.

Together with the Sisters of Charity she opened up two orphanages for the city’s poor and they looked after children regardless of their race or religion. When the Civil War broke out in 1861 New Orleans was blockaded by the Union navy and Margaret opened a soup kitchen to feed the increasing numbers of destitute citizens.

The war meant the number of bereaved children soared and Margaret also did her best to help the ballooning number of women widowed by the conflict.

But the privations and strictures of war did not make it easy. When Union soldiers occupied New Orleans she found that many of the poor people she delivered milk and bread to for free were suddenly behind enemy lines.

Determined not to let the war inconvenience her charity work she demanded a meeting with the infamous General Butler – known as ‘Butcher Butler’ among the ladies of New Orleans for the brutality of his rule.

Butler told Margaret she would face execution if she was caught trying to cross the strictly enforced lines of occupation. She told him that she did not believe it was the policy of President Lincoln to see the poor of New Orleans starve to death to which Butler replied, “You are not to go through the picket lines without my permission, is that clear?” “Quite clear,” Margaret responded reluctantly.

Then, to her great surprise, Butler added, “You have my permission.”

By then Margaret was regarded as something of a minor-saint by the people of New Orleans and she used to sit in the door of her office where she had a smile for all who passed and a wise word of advice for the many who sought her help. 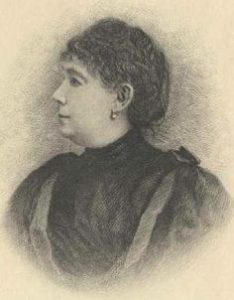 When she was 69 she became ill and died after several months of sickness. Her death made the front page of the local Daily Picayune, which reflected that, “She never had upon her hand a kid glove, she never wore a silk dress, though she earned by hard labor many thousands of dollars. But no woman has been borne to the tomb within the limits of New Orleans who was more generally respected and loved.”

A state funeral was ordered; the Mayor of New Orleans led the coffin, the Lieutenant Governor served as a pallbearer and the Archbishop was present. The orphans of the city wore black and the city was so thronged with mourners they had difficulty maneuvering the coffin into the Cathedral for the requiem mass.

Margaret left every cent of her fortune to the city’s orphanages with no conditions attached as to the whether they catered for Protestant, Catholic, Jewish, black or white children. To her, they were all in need.

Affixed to the end of the will was a simple cross – a reminder of her humble origins – for despite her huge wealth Margaret never learned to read. She died illiterate.

A committee to erect a statue in her honor was swiftly assembled and the sum of $6,000 was soon raised. A remarkable sum when only nickels and dimes were accepted for the project.

The sculpture shows her in her trademark bonnet, sitting in her doorway waiting for people to pass by and chat with her. Inscribed is the single word, ‘Margaret,’ so well-known was she that no further description was needed.

The park was later renamed Margaret Place and it still hosts what it thought to be the first ever statue built in honor of a woman in all of the United States.