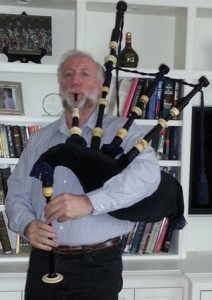 Cape Breton-born Barry Shears is an acknowledged expert on the history of traditional piping in Nova Scotia and its intrinsic connection to the Gaelic language, music and culture. An award-winning musician, Shears has performed at concerts and festivals throughout North America, as well as in Scotland and Europe. Recently he spoke with Celtic Life International about his passion for the pipes!

How long have you been piping?
I have been playing bagpipes for 45 years. I began to learn to play when I was 12 years old. My first piping teacher was Angus MacIntyre, of Glace Bay, Cape Breton.

What inspired you to start?
My late father, Angus Maclean Shears, was a big fan of bagpipe music. Growing as he did in Glace Bay in the post WWI period he had ample opportunity to listen to any one of number old style pipers who had come to Glace Bay from the surrounding countryside to work in the coal mines. He had heard pipes in the army and wanted one of his five sons to learn. I was initially attracted by the romance of the Highland soldier in battles from Louisburg to the Great War and pipe bands

Are they the same reasons you continue to pipe today?
No, quite the opposite actually.  After several successful years in professional competition and playing in a Grade 2 pipe band in Nova Scotia in the late 1970s early 1980s, I had to retire from competitive piping due to a shoulder injury suffered at work. Piping was still a large part of who I was, and with encouragement from my late wife Margaret, and later my two daughters, I began to research Nova Scotia’s significant piping history. I always had an interest in folklore and music even from my early days taking lessons from Angus MacIntyre. I was fortunate to have learned from Angus because he had a fine piping pedigree. His father Joe and three uncles played the bagpipes, as did numerous cousins, both male and female.  Angus’ grandfather was Big Jim MacIntyre, the celebrated piper and step dancer. This particular MacIntyre family came from South Uist to Cape Breton around 1828, and one of their ancestors, Duncan MacIntyre, was family to the MacDonald’s of Clanranald in the mid 18th century. I was inspired to research pipers in Nova Scotia by the folklore efforts of Helen Creighton, Donald Fergusson,  and Allister MacGillivray. Helen and Dr Fergusson collected a great many Gaelic songs, and Allister MacGillivray’s books Cape Breton Fiddler and Cape Breton Ceilidh provided insight into the lives of many Cape Breton fiddlers, piano players, stepdancers, and a few pipers. After reading a copy of Cape Breton Magazine in the early 1980s, which had interview on piping in Cape Breton with the late Arthur Severance, Forchu, I decided to pay Arthur a visit. It proved to be a meeting which would eventually change my entire perspective of Highland piping in Nova Scotia. When I began my research and started making field recordings of my interviews,  I was surprised to discover that no one else, other than John Gibson in Judique, had conducted any research on the subject whatsoever.

What kind of pipes do you play?
I actually own several sets of bagpipes, but my main instrument is a great sounding set of Gavin MacDougall pipes, made sometime before World War One. I bought this bagpipe from Arthur Severance, who purchased them second hand from a Buchanan in Ingonish in 1924. Since acquiring this bagpipe I have continued to add instruments to my collection, My collection now consists of several bagpipes or parts of bagpipes from the immigration period roughly 1773-1830 (the earliest bagpipe I have is from circa 1780); and about a dozen other full size. ¾ size, miniature and Scottish smallpipes, and Northumberland half-longs made  by a variety of makers before 1940.

Are you a traditional piper in terms of style & sound?
It depends what you mean by traditional. Did I learn by ear; or did I learn to play step dance music when I first began to play; or does my playing reflect one of many regional styles of bagpipe performance which once existed in the Gaelic speaking areas of the New World ? Then the answer is no. But then, using this criteria I only know of 2 pipers alive today who can make that claim and they both live in Newfoundland.

How would you describe your own style & sound?
I guess you could say I have my own style of playing which has developed from a variety of influences. I never tried to parrot another particular piper, but I did learn some of the older fingering technique, embellishments and tunes which could still found in mid 20th century Cape Breton from Angus MacIntyre, Alex Currie, tapes of Joe Hughie MacIntyre, Rory Mackinnon, Peter Morrison, Peter MacKinnon, Angus Campbell Beaton, and many others. I am often called to demonstrate some of these regional tune settings and technique which I have learned during many of the workshops at which I teach.  In competitive pipe music I was influenced in the early 1970s by Jimmy MacGee Davey MacIntyre, and Pipe Major Bill Gilmour, CFB Gagetown, New Brunswick. I spent three and half months in Edinburgh in 1978 studying Ceol Mor with Capt Andrew Pitkeathly, a former Gold Medalist and piper to Queen Elizabeth II. I also picked up some tunes from the late Scottish piper, Sandy Boyd.

What have been some career highlights?
Some of my career highlights have been in performing and publishing. Performing includes a  two week tour of Nova Scotia and Edinburgh Scotland in 1981 with John Allan Cameron, Stan Rodgers and several others; performing in Boston in 1983 with a group of exceptional Nova Scotian musicians including Dave MacIsaac, Allie Bennett, John Morris Rankin and Tony Quinn. And a Live to Air broadcast of Cape Breton Music for Radio France, Paris, 1990, with Jerry Holland, John Morris Rankin, and Dave MacIsaac. In addition I have had the pleasure of teaching at several venues in the United States since the mid 1990s, and I have made many friends in that country. On the publishing side I have produced three books of music and historical sketches gleaned from some of my fieldwork with the old pipers in Cape Breton. Several of the tunes I collected, arranged and published have long ago entered the mainstream folk music tradition although where the tunes came from has been largely overlooked or ignored.. In 2003 my wife urged me to see if all my research might be used towards another degree. I went back to University and completed a Masters in Atlantic Canada Studies in 2005.  My edited dissertation entitled “dance to the Piper: The Highland Bagpipe In Nova Scotia” was later published by Cape Breton University Press in 2008.

How are you involved with the piping community in your region?
Locally I judge occasionally at the one or two Highland games. I have recently started offering instruction on line via Skype. I am sorry to say there is very little interest among local pipers in the old styles of playing. Piping is in a steady decline in this Province and as a good friend of mine said “It has become largely a senior’s pastime” This has been quite a change from having some of the best pipers in the world in Nova Scotia in the early 1800s to just a handful of pipe bands in the 21st century.

Are we doing enough to preserve and promote Celtic culture?
I don’t like the term Celtic Culture. For Nova Scotia it is Gaelic culture and as friend said to me recently “The bagpipe is the quintessential Gaelic instrument!”

What could we be doing better?
More people especially musicians should be learning the Gaelic language. I have started studying the language recently and it does help with expression, especially in the old tunes. That is no surprise.

What are your piping plans for the months and years ahead?
Well, I am in the process of writing down much of the information I have collected over 30+ years of piping research. This includes information on several piping families not yet covered by John Gibson or myself. As a companion to this compilation of historical notes and photographs will be a large collection of traditional pipe music. I have no plans eventually to publish this information but it should be written down for posterity. I am also converting my substantial tape collection to a more stable source. Once I am finished sifting through and evaluating the material I plan to deposit copies at the Beaton Institute and the NS Archives.