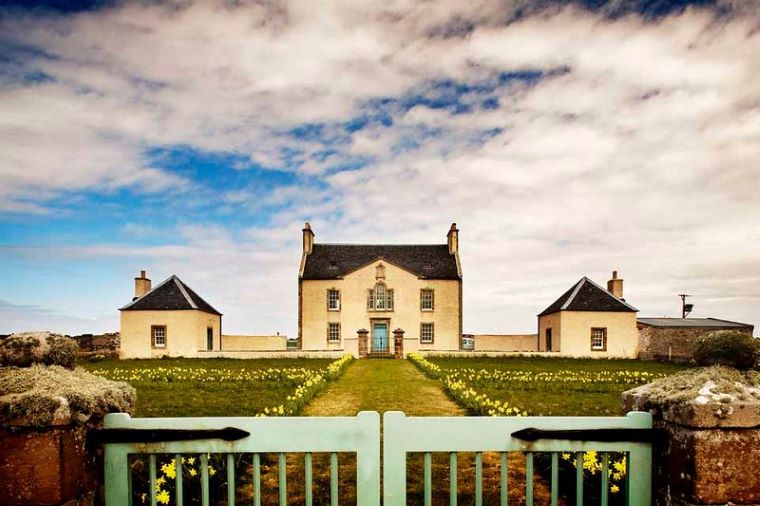 Intimate enough to explore without a car, Unst is magical and remote, but is also easily accessible. Belmont House, an historic Mansion House rescued from ruin and now run by a charitable Trust as a self-catering business since 2011, is the ideal place to stay whilst visiting the island. Sleeping ten people comfortably, the House is perfect for groups, coming to the island to perhaps explore a Scottish Diaspora heritage angle, or for bird watching, or to check out the island’s fascinating Viking past, with Norse Houses dating from 800 AD.

Built in 1775 by Thomas Mouat of Garth, a Shetland landowner and businessman, Belmont House is the least altered classical ensemble in the North of Scotland, retaining its perfectly proportioned Georgian elegance, with rooms including a Drawing Room, Venetian Writing Room, Kitchen and Dining Room. Quirky attic bedrooms and bathrooms feature in the upper part of the house.

Architectural detailing, plasterwork, wood panelling, paint colours and stonework are all mostly original and provide a fascinating glimpse into the upper echelons of Georgian landed gentry. All mod cons are now provided however to ensure the most comfortable of stays.

Belmont House Trustee, Wendy Scott talks of “living history” – as she is friendly with two sets of the family’s descendants who now live in Australia and England.

“This particular family can trace their descendants back some two hundred years,” said Wendy. “It’s fantastic for them to know their family’s heritage story, and where Belmont House on Unst comes into play. It’s heartening when we receive feedback from guests explaining why they came to visit, and what family tree aspects they have managed to explore.”

“Our House Manager, Sharon Calladine is their day-to-day contact whilst at the House, and as an Australian herself is very interested in the Scottish Diaspora angle. She keeps a Visitor’s Book and asks for comments about this from guests, as it helps us piece together even more of Belmont’s history than we may have been aware.” 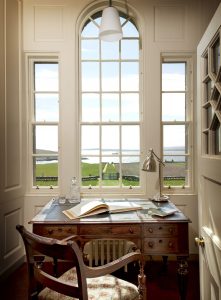 “We had a couple from Canada who had a tour of the house in 2016. The man was eighty plus years old and claimed that either his grandfather or great- grandfather used to own the house. There have been quite a few enquiries over the years from people claiming to be grand- or great -grandchildren of the owners,” said Wendy. “Sometimes it is all hearsay, and we are not able to gain any proof of any of this, but the stories are always interesting to hear. People can be very passionate about their family backgrounds, but at the end of the day we just want them to come to Unst and enjoy Belmont House. It survives as it’s now a viable business with its profits reinvested back into the business.”

Weddings spanning the continents – and with a connection to Unst – can be another reason for extended family groups to visit the facility. Sharon Calladine recounts the Ruiz family from the States (originally from Mexico but the father had served in the military, so the family were all naturalized) who came to Belmont for the wedding of their daughter Celisse, to local man Bobby Macaulay.

His mother Jane Macaulay frequently helps out with catering tasks on the island and has overseen many a wedding breakfast herself. Her homemade tablet – a traditional Scottish confectionery treat made with sugar and cream which is then left to harden into bars – is legendary, featuring in Belmont House’s Welcome Pack for guests. It is also sold on the island to support ‘Bobby’s Bus Shelter’, a charity she has named after her son.

When he was a child, Bobby used to decorate the island’s only bus shelter, (which has appeared in numerous publications and is now known as the best bus shelter in Scotland.

When he left the island to study, Jane continued – and continues – to decorate it anew every year.

“Shetland comes into its own for wedding celebrations,” she says. “I think the couple actually had two – maybe even three – wedding ceremonies so they could include as many family and friends as possible, with guests coming to Unst from the USA, Scotland, England and other more southerly parts of Shetland. There was a States ceremony, one in Scotland and also a blessing here on Unst with guests staying at Belmont House.” 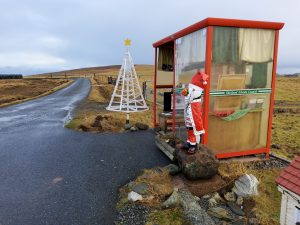 “As Bobby is a local boy there had to be what’s known as a ‘Hamfarin’, a distinct local tradition which sees the wedding party dressing up in the wedding regalia again, and everyone wearing their best wedding reception clothes to enjoy another big party,” says Calladine. “It was held it at the North Unst Public Hall, also known as the Haroldswick Hall. A huge buffet was served, and then there was the traditional Scottish Country dancing which went on all night. The next day a lunch was served before yet another party to celebrate cleaning up the hall. It was fantastic but very exhausting! Bobby and Celisse now live in Glasgow where he is a Ph.D.”

Belmont House hosted a humanist wedding in 2015 of local girl Carolyn Gray. Her grandmother, Freda, also lives on the island – as do a multitude of cousins, aunts, and uncles. Staying at Belmont House for a week, the wedding was held in a marquee in front of Belmont with around 100 guests, with the reception again at the Haroldswick Hall.

At a traditional Shetland wedding there is a dinner for everyone, with each hostess of a table bringing their own cruet sets for salt, pepper, sugar, etc the day before for the hall caterers to fill. There is also entertainment the night before, then the wedding day and then – yes, more food to celebrate cleaning up afterwards on the third day – which usually means a proper clean up on the fourth day!

“Having three generations of a family staying is quite common at Belmont,” adds Calladine . “This can see a family with members from all over the world gathering to reunite. We have a family – originally from Belgium – who come regularly. Some still live in Belgium, but others are now in Japan and England. A family group from Australia, also included members now based in England and Scotland. Then there have been quite a few groups with family on the island who have also included members from Scotland, England, Ireland, and Switzerland. And a family with members in Italy, Ireland, and Canada.”

A true indication of how those with Scottish roots can end up anywhere.

Calladine explains that two family groups from Canada and Australia came partly to Unst to research their family, and to meet relatives here they had never met before.

“The Unst Heritage Centre has a lot of local family information available, and they are usually more than happy to open at a time convenient for the family. Invariably there is also someone on the island who knows something about the family’s past, so they are usually called up to help. 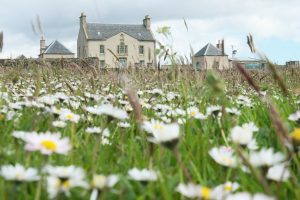 “We also see lots of anniversaries celebrated at Belmont House, especially Silver, Pearl and Diamond, and special birthdays. We’ve even had an 80th.”

“If we know in advance that it’s a special occasion, we add a special card from everyone at Belmont, with either a bottle of wine, or flowers, or chocolates. One guest who knows one of our Trustees commented that the last time she had seen Belmont she was walking in its ruin, and now how wonderful it was now to be back to see it fully restored. It’s this kind of observation that always reminds me personally of what a debt we have to the Trustees for their unstinting dedication, determination, perseverance, and fortitude in bringing Belmont back to life.”

“It must have been with an enormous sense of trepidation and awe at the enormity of what they had taken on when the place looked like it would be easier – more sensible, and more affordable – to be demolished completely. And then the sense of joy, relief, and accomplishment when they see it now.”

Some trips to Unst have been years in the planning.

“I know that one of the Australian groups said that it had taken them years to get here,” notes Calladine . “It can be expensive and a logistical nightmare to co-ordinate a family holiday when several members live in different States – but they did say it was well worth the effort.”

It would seem on average that the shortest preparation time would be a year up to nine years for one group – but they did describe it as the trip of a lifetime!

Many people who had spent time in the RAF on Unst also return with family members to show them where they were stationed.

Of the Scottish Diaspora angle, the country which has seen the most guests at Belmont is by far Australia, closely followed by Canada, with one Australian managing to find a relation from the 1800’s.

“Throughout lockdown we have had enquiries from people in the Czech Republic and Sweden, so these would be countries that we have so far not seen guests from. It would be fantastic, when things re-open after Covid, to add these to the list,” says Calladine. “We’ve had a guest in his late 80s, and a baby of a few months old. Belmont House is truly a family house for everyone, and is always ready to welcome  anyone through its door – for whatever reason they choose to visit this incredible island.”