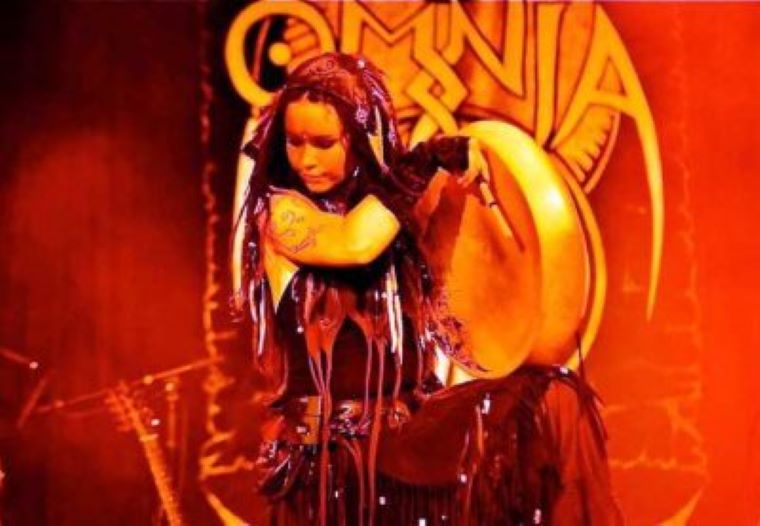 The bodhrán is an old drum but a young musical instrument. Although it has existed in Ireland for centuries, it was introduced into traditional music performance only in the 1960s, and became common only in the 1970s.

The sides of the drum are 9 to 20cm (3½” to 8″) deep. A goatskin head is tacked to one side (although nowadays, synthetic heads, or new materials like kangaroo skin, are sometimes used). The other side is open ended for one hand to be placed against the inside of the drum head to control the pitch and timbre. One or two crossbars, sometimes removable, may be inside the frame, but this is increasingly rare on modern instruments. Some professional modern bodhráns integrate mechanical tuning systems similar to those used on drums found in drum kits. 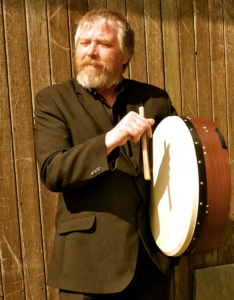 There is evidence that during the Irish rebellion of 1603 (Tyrone’s rebellion) the bodhrán was used by the Irish forces as a battle drum, or that the drum provided a cadence for the pipers and warriors to keep to, as well as to announce the arrival of the army. This leads some to think that the bodhrán was derived from an old Celtic war drum. Seán Ó Riada declared the bodhran to be the native drum of the Celts, with a musical history that predated Christianity.

Third-generation bodhrán maker Caramel Tobin asserts that the name bodhrán means “skin tray”; he also suggests a link with the Irish word bodhor, meaning soft, or dull sounding. Another theory asserts its name is derived from the similar Irish word bodhar, meaning deaf. A relatively new introduction to Irish music, the bodhrán has largely replaced the role of the tambourine, suggesting another possible origin for bodhrán’s name from the abbreviation – ‘bourine.

The drum is usually played in a seated position, held vertically on the player’s thigh and supported by his or her upper body and arm (usually on the left side, for a right-handed player), with the hand placed on the inside of the skin where it is able to control the tension (and therefore the pitch and timbre) by applying varying amounts of pressure and also the amount of surface area being played, with the back of the hand against the crossbar, if present.

The drum is struck with the other arm (usually the right) and is played either with the bare hand or with a lathe-turned piece of wood called a “bone”, “tipper”, “beater”, or “cipín”. Tippers were originally fashioned from a double-ended knuckle bone, but are now commonly made from ash, holly or hickory.

Brush-ended beaters, and a “rim shot” (striking the rim) technique for contrast, were introduced by Johnny McDonagh. There are numerous playing styles, mostly named after the region of Ireland in which they originated. The most common is Kerry style, which uses a two-headed tipper; the West Limerick style uses only one end of the tipper.

Have you visited Cape Breton?
Total Votes: 88
Polls Archive
×
You or your IP had already vote.