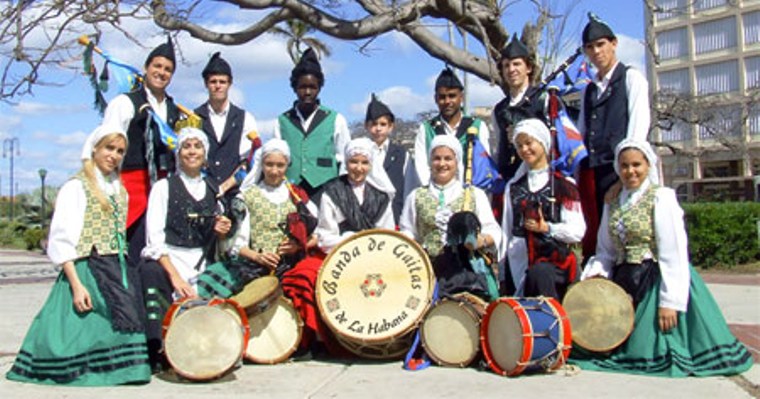 The Diaspora of the nations of the North Atlantic rim, referred to as “Celtic”, spreads to all the continents of the world due to the seafaring nature of the Celts. While Canada was the destination for many migrants from Ireland and Scotland, the island of Cuba was colonized by the Celtic people of Galicia and Asturias, coastal Atlantic countries now part of Northern Spain. New scientific discoveries have genetically linked the Galicians and Asturians to the Irish, the Scots and other Celtic cousins while the inhabitants of Southern Spain share a genetic link to the people of Northern Africa, the legacy of the invasion of the Moors in the eight century and their subsequent occupation of Spain. The Moors met with fierce resistance in the north especially in the mountainous regions of the Kingdom of Asturias. The Asturians in 722 at a pivotal battle in Covadonga , repelled the Morrish invaders despite being outnumbered. The anniversary of this decisive battle, September 8th, is celebrated all over the world each year by people of Asturian heritage. 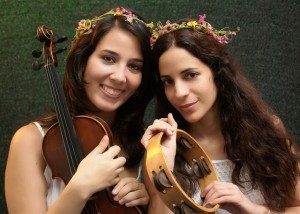 One such place is Pinar Del Rio, a province rich in agriculture in western Cuba. There the descendants of the early Asturian immigrants celebrate the music and dance of their ancestors. Beatriz Martínez Trujillo, “Betty” – a singer and musician – is committed to preserving the culture of her forebears. I first met Betty and her folk group Resurrectio at the CeltFest Cuba festival in Havana. One gaita, (Spanish bagpipe) played in the band is special. It was handcrafted in Pinar by Jose Angel Diaz Armentero and the band is very proud of this accomplishment. Young people dance in traditional costumes crafted by local seamstress Dolores Pozo. The group’s fiddler Angelica Gongora transcribes the pipe tunes to violin and also leads a fiddle club. The folk style is a departure from the classical music she studies at university in Havana. Formal education in the arts in Cuba is patterned after the Soviet model and maintains a high standard of excellence, but folk music is not part of the curriculum. Rather, musicians like Angelica learn tunes from other fiddlers and pipers outside the academic setting, some from Spain. Spain has strengthened ties with the island which was once a Spanish colony. The Spanish government sends cultural envoys and artists from Asturias to teach traditional music and dance. Renowned Asturian pipers Xuacu Amieva and Flavio Benito have visited Pinar as has José Federico Álvarez Palacios of the Federation of Asturian Folk Associations. The folk group Xareu D´ Ochobre donated a gaita to the Pinar musicians and taught music and dance workshops to the eager Cuban students. The community welcomes their European cousins with joyous open arms. The Pinarenos participated in the world-wide “An Dro the World” event organized by the France’s Lorient Festival Interceltique. The Cubans danced at the same time as other Celtic groups around the world linking the global Celtic Disapora with the simultaneous event. 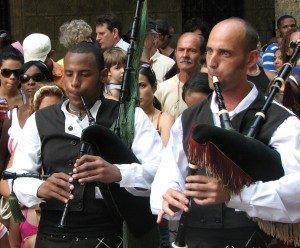 Asturian traditions are not only preserved artistically, the Cubans also practice the old ways of their ancestors in their day-to-day living. After the abrupt end of Soviet economic aid, Cuba was thrown into an acute economic depression called the “Special Period”. Overnight the shipments of petroleum were drastically reduced. Agriculture was particularly hard-hit. Supplies of pesticides and chemical fertilizers virtually disappeared overnight. Tractors were under-utilized due to the scarcity of fuel. The resourceful people of Pinar immediately turned to organic farming methods. Now the province is noted globally as a world leader in green methods of food production. The beautiful vistas of the area draw many ecotourism travellers. Raised granaries called horreos, an emblematic structure of Asturias, are also found in Pinar. In this backdrop of living off the land in harmony the local culture retains its link to Asturias. Betty remarked “The music, the dance, the culinary customs, the legends, all make us feel close to the earth and our ancestors. It is magical.” By reviving the traditional lifestyle of their ancestors they have turned adversity into opportunity.

In Pinar there are many buildings of architectural interest. The beautiful courtyard of the Museum of Natural History is a popular open-air venue for artistic performance. A link to Canada is visible inlaid on the marble walk in front of the “Banco de Credito y Comercio”. The words “Royal Bank of Canada” denote the building was formerly used as a branch office. La Casa de la Culture (the House of Culture) and the beautifully restored Milanes Theater are historically significant places. The theatre’s red velvet seats and gracious design provide an elegant venue for local performers and invited foreign artists. Artists of the Canadian-Cuban Celtic Society visit Pinar regularly to forge a strong link with these Caribbean Celtic cousins, transcending any linguistic barrier with the universal language of music and dance. ~ By Maria Watson