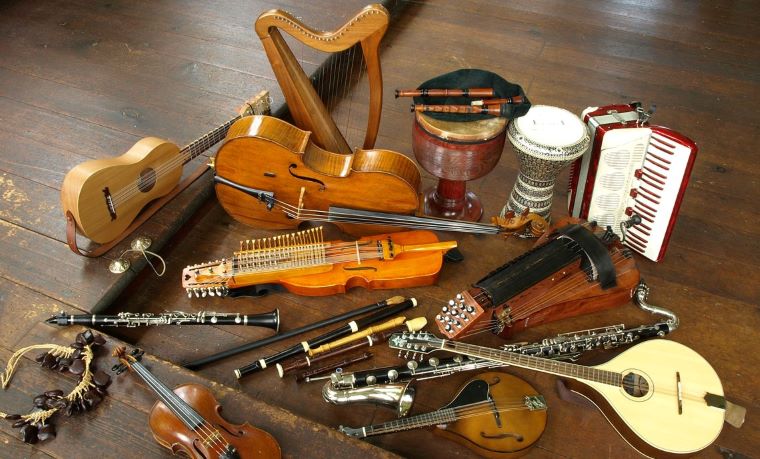 Celtic music employs a special set of instruments. Here are the most popular.

Celtic Harp
Probably most well-known, globally, because of its placement in the logo of the Irish Guinness Stout! The Celtic Harp is also the symbol of Ireland. It’s an ancient musical instrument, used by musicians for thousands of years to entertain, enhance their stories, and enliven gatherings. The stringing used to be gut-strung but is now wire strung (bell-like tones) or nylon strung (soft tones). Modern Celtic Harps stand 4 feet high and boast 34 strings.

Pipes
Whether traditional Scottish Highland bagpipes or Uillean pipes, these instruments are made from a leather bladder, inflated through a pipe by the musician. Yes, work on your lung capacity! The musician presses the bag underneath his/her arm and plays the tune by deft fingerwork on the chanter (which looks like a recorder).

Fiddle
Probably the most well-known of Celtic instruments, the fiddle provides haunting, soulful sounds, or rollicking, danceable tunes. It’s a very familiar sound. A fiddle is strung with steel, while a violin is usually strung with gut or nylon. The musical instrument itself is the same. The techniques involved in fiddling are different from playing the violin – sharper, shorter bursts, and quick fingerwork. There are definitely regional variations in fiddle playing.

Tin Whistle
The easiest to carry, the tin whistle has been a mainstay in Celtic music for ages. It is closely related to the flute. The tin whistle is a metal cylinder, like a recorder, with 6 stops on which the musician can finger the different notes. The instrument is held vertically. The tin whistle is mostly used for accent notes, as well as the main melody in a song. 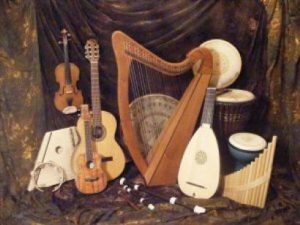 Flute
Celtic musicians tend to prefer the old-fashioned wooden flutes to the more modern, metal flute. The instrument is held horizontally. It is a simple system transverse flute. The tone holes are covered with the fingers to produce different notes. It plays in a major scale. There are usually no metal keys. The flute can be used to achieve ethereal accents, or also contribute to the main melody.

Bodhran
Wondered when percussion would show up? No Celtic music is complete without the bodhran (pronounced bow-ran), a circular frame drum. Usually made from treated goatskin stretched over a round wooden frame and a crossbrace in the back, the bodhran makes delicious-sounding tones. It is played with a drumstick, called a beater. It can also be played with the hands. Bodhran players can obtain different tones depending on where they play the drum, with deeper tones coming from the middle of the drum, and shorter ones from the sides.

Bones
Also known in the US south as Spoons, since they can be played with two spoons! Bones are a percussion instrument, composed of two identical pieces of wood (in the olden days, sheep ribs). They should be about 5-7 inches in length – the right size of a sheep rib! You hold two or four of them between your fingers and tap away. The percussion sounds arise from them hitting each other (or your legs, or your fingers, etc.). These are fun and very portable. And, the learning curve for playing them is very short and fun.

Concertina
A small hexagonal accordion, the concertina is much smaller and can be held in your lap. It’s generally a two-or three button row musical instrument, and is also a bellows instrument. Both the concertina and the accordion are considered mainstays of the Celtic folk music tradition.