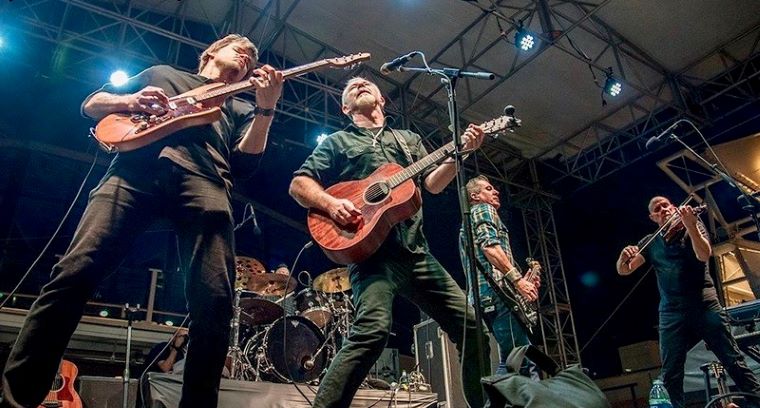 Celtic rock is a genre of folk rock, as well as a form of Celtic fusion which incorporates Celtic music, instrumentation and themes into a rock music context. It has been extremely prolific since the early 1970’s and can be seen as a key foundation of the development of highly successful mainstream Celtic bands and popular musical performers, as well as creating important derivatives through further fusions. It has played a major role in the maintenance and definition of regional and national identities and in fostering a pan-Celtic culture. It has also helped to communicate those cultures to external audiences.

The style of music is the hybrid of traditional Irish, Scottish Gaelic, Welsh and Breton musical forms with rock music. This has been achieved by the playing of traditional music, particularly ballads, jigs and reels with rock instrumentation; by the addition of traditional Celtic instruments, including the Celtic harp, tin whistle, uilleann pipes (or Irish Bagpipes), fiddle, bodhrán, accordion, concertina, melodeon, and bagpipes (highland) to conventional rock formats; by the use of lyrics in Celtic languages and by the use of traditional rhythms and cadences in otherwise conventional rock music. Just as the validity of the term Celtic in general and as a musical label is disputed, the term Celtic rock cannot be taken to mean there was a unified Celtic musical culture between the Celtic nations. However, the term has remained useful as a means of describing the spread, adaptation and further development of the musical form in different but related contexts. 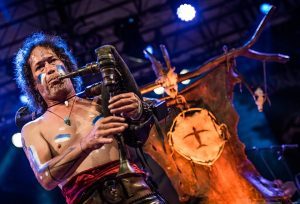 Celtic rock developed out of the (originally English) electric folk scene at the beginning of the 1970’s. The first recorded use of the term may have been by the Scottish singer Donovan to describe the folk rock he created for his Open Road album in 1970, which itself featured a song named ‘Celtic Rock’. However, the lack of a clear Celtic elements to the self-penned tracks mean that even if the name was taken from here, this is not the first example of the genre that was to develop.

It was in Ireland that Celtic rock was first clearly evident as musicians attempted to apply the use of traditional and electric music to their own cultural context. By the end of the 1960’s Ireland already had perhaps the most flourishing folk music tradition and a growing blues and pop scene, which provided a basis for Irish rock. Perhaps the most successful product of this scene was the band Thin Lizzy. Formed in 1969 their first two albums were recognisably influenced by traditional Irish music and their first hit single ‘Whisky in the Jar’ in 1972, was a rock version of a traditional Irish song. From this point they began to move towards the hard rock that allowed them to gain a series of hit singles and albums, but retained some occasional elements of Celtic rock on later albums such as Jailbreak (1976). Formed in 1970, Horslips were the first Irish group to have the terms ‘Celtic rock’ applied to them, produced work that included traditional Irish/Celtic music and instrumentation, Celtic themes and imagery, concept albums based on Irish mythology in a way that entered the territory of progressive rock all powered by a hard rock sound. Horslips are considered important in the history of Irish rock as they were the first major band to enjoy success without having to leave their native country and can be seen as providing a template for Celtic rock in Ireland and elsewhere. These developments ran in parallel with the burgeoning folk revival in Ireland that included groups such as Planxty and the Bothy Band. It was from this tradition that Clannad, whose first album was released in 1973, adopted electric instruments and a more ‘new age’ sound at the beginning of the 1980s. Moving Hearts, formed in 1981 by former Planxty members Christy Moore and Donal Lunny, followed the pattern set by Horslips in combining Irish traditional music with rock, and also added elements of jazz to their sound.

There were already strong links between Irish and Scottish music by the 1960s, with Irish bands like the Chieftains touring and outselling the native artists in Scotland. The adoption of electric folk produced groups including the JSD Band and Spencer’s Feat. Out of the wreckage of the latter in 1974, was formed probably the most successful band in this genre, combining Irish and Scottish personnel to form Five Hand Reel. Two of the most successful groups of the 1980s emerged from the dance band circuit in Scotland. From 1978, when they began to release original albums, Runrig produced highly polished Scottish electric folk, including the first commercially successful album with the all Gaelic Play Gaelic in 1978. From the 1980s Capercaillie combined Scottish folk music, electric instruments and haunting vocals to considerable success. While bagpipes had become an essential element in Scottish folk bands they were much rarer in electric folk outfits, but were successfully integrated into their sound by Wolfstone from 1989, who focused on a combination of highland music and rock. 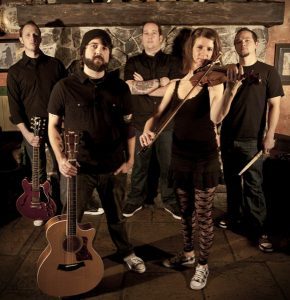 Brittany also made a major contribution to Celtic rock. The Breton cultural revival of the 1960s was exemplified by Alan Stivell who became the leading proponent of the Breton harp and other instruments from about 1960, he then adopted elements of Irish, Welsh and Scottish traditional music in an attempt to create a pan-Celtic folk music, which had considerable impact elsewhere, particularly in Wales and Cornwall. From 1972 he began to play electric folk with a band including guitarists Dan Ar Braz and Gabriel Yacoub. Yacoub went on to form Malicorne in 1974 one of the most successful electric folk band in France. After an extensive career that included a stint playing as part of Fairport Convention in 1976, Ar Braz formed the pan-Celtic band Heritage des Celtes, who managed to achieve mainstream success in France in the 1990’s. Probably the best known and most certainly the most enduring electric folk band in France were Tri Yann formed in 1971 and still recording and performing today. In 2017 celtic-punk band Les Ramoneurs De Menhirs fly the flag for Brittany singing in their native language and playing regularly and often accompanied on stage by Louise Ebrel, daughter of Eugénie Goadec, a famous traditional Breton musician.

By the end of the 1960’s Wales had produced some important individuals and bands that emerged as major British or international artists, this included power pop outfit Badfinger, psychedelic rockers Elastic Band and proto-heavy metal trio Budgie. But although folk groupings formed in the early 1970’s, including Y Tebot Piws, Ac Eraill, and Mynediad am Ddim, it was not until 1973 that the first significant Welsh language rock band Edward H Dafis, originally a belated rock n’ roll outfit, caused a sensation by electrifying and attempting to use rock instrumentation while retaining Welsh language lyrics. As a result, for one generation listening to Welsh language rock music could now become a statement of national identity. This opened the door for a new rock culture but inevitably most Welsh language acts were unable to breakthrough into the Anglophone dominated music industry. Anhrefn became the best known of these acts taking their pop-punk rock sound across Europe from the early-80’s to mid-90’s.

Cornwall and the Isle of Man

Whereas other Celtic nations already had existing folk music cultures before the end of the 1960s this was less true in Cornwall and the Isle of Man, which were also relatively small in population and more integrated into English culture and (in the case of Cornwall) the British State. As a result, there was relatively little impact from the initial wave of folk electrification in the 1970’s. However, the pan-Celtic movement, with its musical and cultural festivals helped foster some reflections in Cornwall where a few bands from the 1980s onwards utilised the traditions of Cornish music with rock, including Moondragon and its successor Lordryk. More recently the bands Sacred Turf, Skwardya and Krena, have been performing in the Cornish language. 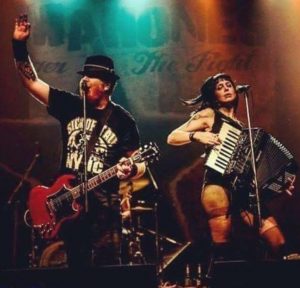 Ireland proved particularly fertile ground for punk bands in the mid-1970s, including Stiff Little Fingers, The Undertones, The Radiators From Space, The Boomtown Rats and The Virgin Prunes. As with electric folk in England, the advent of punk and other musical trends undermined the folk element of Celtic rock, but in the early 1980s London based Irish band The Pogues created the subgenre Celtic punk by combining structural elements of folk music with a punk attitude and delivery. The Pogues’ style of punked-up Irish music spawned and influenced a number of Celtic punk bands, including fellow London-Irish band Neck, Nyah Fearties from Scotland, Australia’s Roaring Jack and Norway’s Greenland Whalefishers.

One by-product of the Celtic diaspora has been the existence of large communities across the world that looked for their cultural roots and identity to their origins in the Celtic nations. While it seems young musicians from these communities usually chose between their folk culture and mainstream forms of music such as rock or pop, after the advent of Celtic punk large numbers of bands began to emerge styling themselves as Celtic rock. This is particularly noticeable in the USA and Canada, where there are large communities descended from Irish and Scottish immigrants. From the USA this includes the Irish bands Flogging Molly, The Tossers, Dropkick Murphys, The Young Dubliners, Black 47, The Killdares, The Drovers and Jackdaw, and for Scottish bands Prydein, Seven Nations and Flatfoot 56. From Canada are bands like The Mahones, Enter the Haggis, Great Big Sea, The Real McKenzies and Spirit of the West. These groups were naturally influenced by American forms of music, some containing members with no Celtic ancestry and commonly singing in English. In England we have The BibleCode Sundays, The Lagan and others.

Like Celtic rock in the 1970s, Celtic metal resulted from the application of a development in English music, when in the 1990s thrash metal band Skyclad added violins, and with them jigs and folk voicings, to their music on the album The Wayward Sons of Mother Earth (1990). This inspired the Dublin based band Cruachan to mix traditional Irish music with black metal and to create the subgenre of Celtic metal. They were soon followed by bands such as Primordial and Waylander. Like Celtic punk, Celtic metal fuses the Celtic folk tradition with contemporary forms of music.

Whereas in England electric folk, after initial mainstream recognition, subsided into the status of a sub-cultural soundtrack, in many Celtic communities and nations it has remained at the forefront of musical production. The initial wave of Celtic rock in Ireland, although ultimately feeding into Anglo-American dominated progressive rock and hard rock provided a basis for Irish bands that would enjoy international success, including the Pogues and U2: one making use of the tradition of Celtic music in a new context and the other eschewing it for a distinctive but mainstream sound. Similar circumstances can be seen in Scotland albeit with a delay in time while Celtic rock culture developed, before bands like Runrig could achieve international recognition. Widely acknowledged as one of the outstanding voices in Celtic/rock is the Glasgow born Brian McCombe of The Brian McCombe Band, a pan Celtic group based in Brittany.

In other Celtic communities, and particularly where Celtic speakers or descendants are a minority, the function of Celtic rock has been less to create mainstream success, than to bolster cultural identity. A consequence of this has been the reinforcement of pan-Celtic culture and of particular national or regional identities between those with a shared heritage, but who are widely dispersed. However, the most significant consequence of Celtic rock has simply been as a general spur to immense musical and cultural creativity.