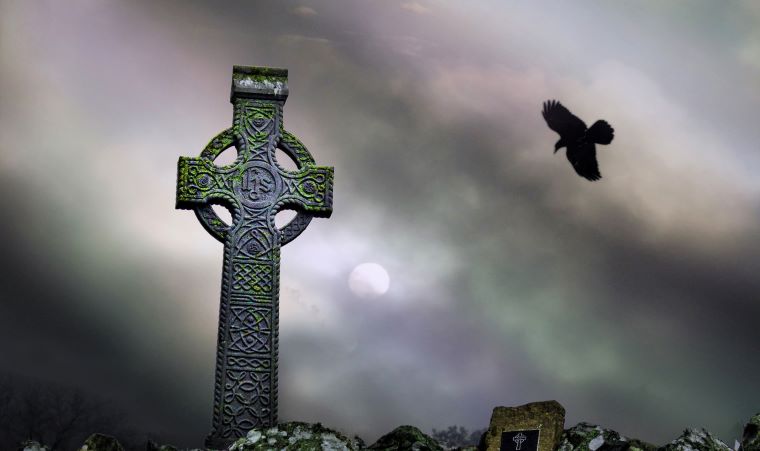 While there is little recorded about Celtic religion, there are some things we do know about our ancestors’ beliefs and rituals.

The Celts were polytheistic

Celtic tradition and stories are full of gods and goddesses. However, unlike in Greece and Rome, Irish gods and goddesses did not have clear functions. It seems that at different times in different stories, different gods have responsibility for a single aspect of human life or of a part of nature. When the Romans write about Celtic beliefs, there is great confusion. For example, when they looked for the equivalent god of War, Mars, among the Celtic gods, they found 69 or more. It seems that many gods had responsibility for war in Celtic beliefs, depending on the circumstances. In total, the Romans recorded almost 400 Celtic god names. Nonetheless, it seems that there were 4 or 5 ‘biggies’ and the rest were associated with a particular Celtic tribe or ‘tuath’. In early Irish literature this local loyalty can be seen in the oath ‘I swear by the gods my people swear by.’

The Celts practiced both animal and human sacrifice

In many ancient religions and in some areas of the world today, the giving up of a life, either animal or human, can be considered ‘desirable’ by the gods. For pre-Christian Celts, when they made a sacrifice, it had to be destroyed in order for it to be passed over to the gods. For this reason animals had to be killed and offerings of any objects destroyed. Human sacrifice of slaves and enemies among Celts in Europe did happen but it was not common. A druid would stab the victim and interpret the process of the unfortunate person’s death. It’s less certain whether human sacrifice was part of the Irish Celtic religion. Why did the Celts make sacrifices? According to Celtic tradition, they did so in the hope of receiving good luck or other favors. In order to ward off the bad or evil side of the spiritual world, it was necessary to pacify the gods with gifts. 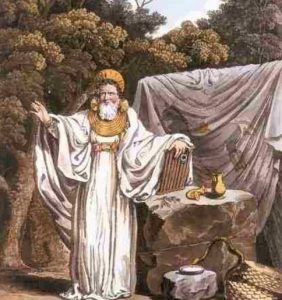 Celtic Religion was strong on communal and ritual celebration

When sacrifices were made, elaborate feasting on sacrificed animals provided a communal link with the supernatural world. A good example of ritual religious practice is the Bull Feast (known as Tarbhfhess in Gaelic). This was the Celtic means of choosing a King, especially the King of Tara. A bull was sacrificed and a chosen man drank the blood and ate its meat. He would then go to sleep to the incantations of 4 druids (Celtic priests) and have revealed to him in a dream who should be the rightful king. This was only part of the election process but it shows the importance put on gaining the approval of the gods.

It seems that the early Celts believed in lots of supernatural beings who occupied and controlled parts of the natural world. This gave rise, for example, to lots of Celtic legends about fairies.

The Celts believed in immortality

It seems that the Celts believed in life after death, but there is little to show how they thought that this could be achieved. In fact, there is little in the way of ethics in Celtic religion. Prior to the arrival of Christianity, the concept of punishment by the gods for ‘behaving badly’ did not seem to exist. It appears as if the gods were not interested in ‘good or evil’. While the Continental Celts were prepared for the other world by being buried with their treasures, it seems that the Irish Celts most likely favoured cremation as there has been so little evidence of burial sites found.

The Celts seem to have recognized that animals occupy the world in their own right. In fact, gods appeared in many animal forms. Because of this, Celts were often cautious and respectful towards animals. It also helps explain why animal imagery is so much more common in Celtic Art than in the Roman or Christian tradition. Animals such as birds were particularly important, had supernatural powers and their singing was considered to have healing magic. Celts also believed that animals like cattle, horses, pigs, dogs, deer, bears, snakes and birds were protected by gods, or more commonly, goddesses.

The Celts believed that the world was alive

Part of Irish Celtic religion was the belief that naturally occurring things such as rocks, rivers and trees had spirits. These were not necessarily good or bad spirits but could react in a certain way, depending on how they were treated. 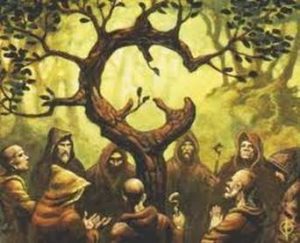 Imbolc – the first day of Spring. It is celebrated on 1 Feb. This later became Christianized as St. Brigid’s Day.

Beltaine – This marks the end of the dark part of the year and the welcoming of summer. It was celebrated on 1 May (Bealtaine is the Gaelic word for the month of May). It is the day associated with moving cattle to higher pastures and beginning new projects.

Lughnasa (or Lughnasad) – was celebrated on the 1 August. (The word for August in Gaelic is Lúnasa). It is closely associated with the Celtic god Lug. It was also an important communal date with a big feast to mark the occasion. Celts gathered at one of a number of traditional sites around the country.

Samhain – traditionally has been a very important date in the Irish calendar. It takes place on 1 November (again the Gaelic for November is Samhain) and it marks the end of one year and the birth of another. In Celtic religion, it was considered a time when the gods were hostile and dangerous and had to be pleased by making sacrifices.

Celtic beliefs did not die after arrival of Christianity

The legends and stories of pre-Christian Ireland survived alongside the growth of Christianity from the 5th Century. Lots of folk belief and practice remained and even in the 13th, evidence exists of the Bishop of Raphoe (County Donegal) complaining about the worship of idols. Celtic beliefs influenced the practice of early Christianity in Ireland in some of the following ways.