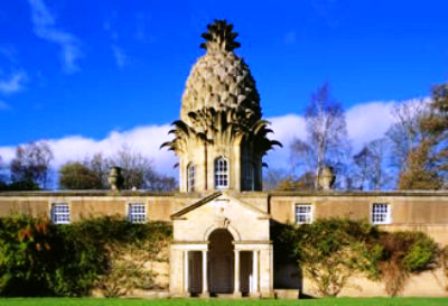 Beyond the obvious attractions, Scotland has some more curious treasures to discover

Achmelvich Castle, Assynt
Scotland has hundreds of castles – we’ve already offered in a previous gallery a pick of 10 of the best. But those wandering the magnificent Assynt coastline have this strange structure to discover. This tiny ‘castle’ was constructed in concrete in the 1960s by a newly qualified architect… After completing the castle and making local friends, it is thought he spent only one night in it before leaving never to return.

MacCulloch’s Fossil Tree, Isle of Mull
A geological wonder at the western tip of the Ardmeanach Peninsula, MacCulloch’s Fossil Tree is thought to be 50 million years old. The huge tree was engulfed by the lava flows from the Ben More volcano and the cooling effect of the trunk has caused the basalt columns around it to curve. The fossil is mostly an imprint, but in the bottom few feet the fossil of the tree itself survives; once this was full of the original charcoal but countless visitors have meant that little now remains. The tree is the endpoint of a remote and challenging walk on the Isle of Mull.

Soutar’s Menagerie, Perth
William Soutar was Perth’s best-known poet. After serving in the First World War he contracted a chronic spine disease that left him disabled. His poems have inspired other public art around the city (including the striking ‘Nae Day Sae Dark’ in the High Street) but his fun side is demonstrated by these quirky animal forms taken from his poem Bairn Rhymes, sculpted by Rhonda Bayley. They can be seen on our Perth city walk.

Pressmennan Wood, East Lothian
Take a walk around Pressmennan Wood, and your kids may help you discover an unexpected delight. Amongst the trees can be found the homes of the mythical ‘Glingbobs’ and ‘Tootflits’. The Tootflits can fly and the doors to their homes are higher in the trees, whereas the Glingbobs live on the forest floor.

The Pineapple, near Stirling
Is this Britain’s most bizarre building? The huge fruit on the Dunmore Estate is constructed from stonework, and fragments of paint found during its restoration suggest that it may once have been painted to appear even more pineapple-like. Originally there were heated glasshouses along each side of the Pineapple where the fruits – a great luxury – were grown. It can be visited during a short walk near Airth, between Stirling and Falkirk.

Sheela na gig, Rodel Church, Isle of Harris
What can we say? Wonder round the east side of the tower at the magnificent Rodel Church on the Isle of Harris, and you will see this remarkable carving of a woman displaying her genitals. Sheela-na-gigs – as such sculptures are known – can be found on many Norman or Romanesque churches, and some are thought to have been incorporated from previous structures. Rodel Church goes a step further – as on the south wall of the tower is an ancient carving of a man also exposing himself.

Greyfriar’s Bobby, Edinburgh
Easier to explain to the children is this well-loved wee statue in the city of Edinburgh. The small bronze of Bobby stands opposite the pub named after him; he was a Skye Terrier who remained by his master’s grave for fourteen years, and is buried in the Greyfriar’s churchyard. It is visited on our Edinburgh Old Town walk.

The Fairy Glen, Isle of Skye
The Isle of Skye is packed with strange landscapes, but this bizarre and delightful miniature landscape of grassy, cone-shaped hills, the Fairy Glen (sometimes spelt Faerie Glen) is a beautiful spot on a sunny summer’s day. The Fairy Glen was formed by the land being disrupted by a series of landslides (on a smaller scale than the huge landslips that formed the nearby Storr and the Quiraing), with the results then smoothed by subsequent glaciation.

Singing Sands, Ardmaurchan
There are several other beaches with ‘singing sands’ in Scotland, such as at Cleadale on the Isle of Eigg, and Traigh Ban on Islay; but the Singing Sands near Kentra by the Ardnamurchan peninsula are perhaps the best known. To make the sands sing shuffle your feet across them. The noise is made by the grains of sand rubbing together and a number of factors need to be present to make it possible. The sand grains must be completely round and between 0.1 and 0.5mm in diameter, the sand must contain silica and have the right level of humidity to generate the low frequency sound.

Hut of the Shadows, Isle of North Uist
A lonely spot on the coastline of North Uist in the Outer Hebrides is the last place you’d expect to find a camera obscura. The turf roof of the tiny Hut of the Shadows is visited by a walk from Lochmaddy. Step inside to see the camera obscura which reflects an image of Loch nam Madadh onto the inside walls. The quality of the image depends on the light and sometimes fishing boats can be seen passing on the rippling water reflecting inside the circular stone-built hut.

Crucifixion Cave, Davaar Island, Kintyre
This one is quite eye-popping. In 1887 a painting of the crucifixion was discovered by fisherman on the tidal Davaar Island off Kintyre; the men initially thought it must be the work of a miracle. In fact the painting was made by local art teacher Alexander MacKinnon who said the image had come to him in a dream. He returned to the area a number of times to retouch the painting, and restoration has continued to this day. In recent years this proved necessary when the face of Christ was painted over with the image of Che Guevara. Today the image is as similar to the 1887 original as possible.