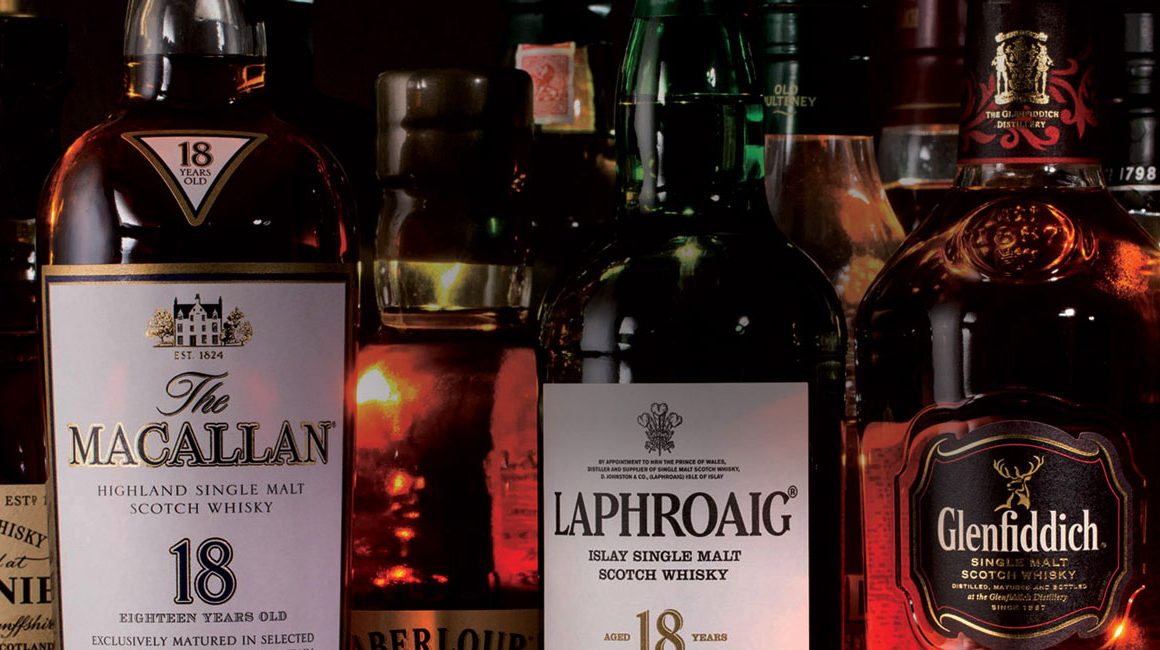 Knowing which scotches to stock your bar with is the first step to becoming a well-seasoned pro. Lighter, fruitier scotches and blends tend to be good for those just dipping their toes in, while the heavier, peatier and aged scotches are enjoyed by seasoned connoisseurs.

The Highlands is the largest of the scotch regions, and it’s probably a good place to start your scotch journey, as the malts from this area are lighter with honey flavors and less peat, but still feel like real scotch. A Highland scotch will be smooth with floral hints and a thinner feel on your tongue. Dalwhinnie is a Highland scotch and is known as “The Gentle Spirit.” It’s a good introduction, although it can get pricy quickly. Glenmorangie is another Highland producer with easy-to-drink malts. The Glenmorangie Nectar D’or is a great starter with an easy, caramel taste that doesn’t linger. Depending on which you’re after, bottles of Glenmorangie are very affordable (though if you have the means there’s always the 25-year bottle).

Technically, a Speyside scotch is from the Highlands, but this particular area is so prolific that it’s considered a separate production region altogether. More than half of all of Scotland’s malt whisky distilleries are in Speyside. The region is lush and its scotches are delicate, with hints of vanilla, fruits and honey. Some Speysides end up with spice flavors if aged long enough. You can introduce yourself to this type with the Balvenie Doublewood. This malt has been aged in both a scotch cask and then a sherry cask, giving it a rich, full, creamy taste with a quick finish. It’s a stronger scotch flavor, but the rich taste makes it an enjoyable, scotch drinker’s scotch. Cragganmore is another accessible Speyside distiller with bottles that vary in price but can be affordable.

If what you’re after is a scotch with no peat whatsoever, head to the Lowlands. This region of Scotland is full of lush, rolling hills — the perfect place to grow grain for whisky. The scotches from the Lowlands are not only lighter in flavor, but also in color than other malt whiskies. These scotches have more floral hints than other regions and have the added difference of more cereal-like flavors. Glenkinchie is a popular distiller in the Lowlands and a 12-year bottle from there will give you a good idea of the warm, flowery and light flavors of the region. It’s a good go-to for first-timers. You can also try to get your hands on a bottle of Auchentoshan, which is made with no peat at all. Keep this bottle on hand for anyone who is afraid to even try scotch.

Scotland’s southern islands bring their own, unique flavors to the mix. Surrounded by water, the climate can be harsher on the isles, lending to stronger peat and smoke flavors. And because each bottle is so different, it can be fun to impress people with your ability to identify them. (This may take some practice. Very enjoyable practice, that is.) Their highly varied aromas and tastes are always delightfully complicated. It’s as though you’ll never have the same glass twice. Explore Lagavulin for the taste and experience of what is considered the definitive Islay malt. If you know someone who’s already a scotch drinker, offer them an Ardbeg with some age on it, though the classic 10-year will never let you down. This is the perfect malt for a single ice cube to open it up and sip away.

To the north, the Skye scotch region produces whiskies that are similar to an Islay but have their own distinct qualities. Again, because the islands are rugged and windswept, the environment and materials differ from the mainland regions. An isle whisky will have that peaty flavor, but the added maritime tones round out the flavor for something completely different. You’ll find island malts can have salty tones with a buttery feel. The good news is, Skyes show up in blends. They can add smoky taste without being too heavy. A good and inexpensive Islands starter is the Isle of Skye blend. You can grab a bottle in the $30 range and feel good about sharing it. Talisker is another well-known and beloved Skye malt with a thick, buttery taste and musky perfume.