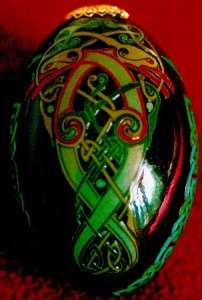 For some, it is a holy day, while for others it is a cause to gather and share with family and friends. Whatever the reason, Easter is a time to celebrate. Celts, in particular, have some interesting and unique traditions on this day.

Here is a look at some of the traditional Easter Celtic customs with particular reference to the Isle of Man.

The solemnity of religious observance on Good Friday was followed by preparations at home and in church on the Saturday for the Easter Sunday service and family feasting and enjoyment afterwards.

Devotions completed, Easter Monday was given over to sport, visiting markets and fairs and general merry-making.

In the Celtic world eggs are an ancient symbol of the life force and rabbits and hares symbols of good luck and fertility.

It was natural, therefore, that at a time of the renewal of life after the dormant period of winter, these symbols became universal.

When the Festival of the Anglo-Saxon goddess of the dawn and spring Eostre, equivalent to the Norse goddess Frigga, was held the hare was adopted as her symbol, as it was also for the moon goddess.

The Easter Bunny is derived from the hare, and hare hunting became a traditional Easter activity, latterly on Easter Monday.

The ancient Celts rolled eggs downhill at Beltane, in imitation of the movement of the sun, but the Church remodelled this custom to symbolise the rolling away of the stone in front of Christ’s tomb and took the theme of death and re-birth and superposed the death and resurrection of Christ. The Celts also decorated eggs.

Many of our Easter foods are derived from those eaten at Jewish Passover, such as lamb, eggs, cake, bread and wine, the period of Lenten austerity having passed.

In keeping with the spirit of renewal, new clothes were often bought for Easter, including a new bonnet.

Good Friday in the Isle of Man was generally commemorated as elsewhere. No iron was put into the fire, nor tongs. A rowan stick was used instead. The griddle was also removed from the fireplace. A large bannock (soddag) was made, with three corners, and baked on the hearth. No ironing was done. Flitters (limpets) were eaten for breakfast, eggs and fish for dinner.

Easter Sunday in the Isle of Man was thought of as an unlucky day. Many stayed inside for fear of accidents. Daffodils, whose Manx name meant goose-herb, were not brought into the house while geese were hatching as this brought bad luck.

If the mother goose saw the daffodils she might look at the yellow colour of the flowers and think all her goslings had hatched, deserting the nest.

Similarly, chickens hatching at Easter were a sign of bad luck.

On Easter Monday and Easter Tuesday tithes were paid to the minister and proctor.

In Wales Palm Sunday is called Flowering Sunday, and families traditionally visit the graves of their relatives to lay flowers on the graves. On this day they also have famous Welsh singing contests which are known as Gymansa Ganu. Choirs from various chapels in the area come together to take part in these festivals, and at these festivals special conductors are invited. Another feature of Easter used to be the preaching services held in the chapels. There would be another on the Saturday night, and then three on Easter Sunday itself. The town of Ffestiniog used to hold another three services on Easter Monday as well. People would flock to these services at which ministers from other towns and villages would be asked as guest preachers. These preachers would take these events of the first Holy Week to use in sermons.

In Ireland, people dance in the streets on Easter Sunday. The dancers compete for the prize of a cake. Easter is also a very sacred time of fasting and prayer. On Easter Saturday at church hundreds of small candles are lit off the Paschal candle that has been blessed by the priest. On Easter Sunday a quiet meal is eaten at home. Traditional Easter meal of leek soup and roasted spring lamb. Good Friday was an extremely solemn day in Ireland. Most people eat nothing at all until midday, and went about barefoot. No one killed animals, no wood was burned or made into things, and no nail was driven. No one is aloud to move house, or begin any important enterprise. No one fishes. Eggs that are laid on Good Friday were marked with a cross, and everybody ate at least one of these eggs on Easter Sunday.  On Easter Saturday they use to hold herring processions. These were mock funerals of herrings, and these processions were often held because people became so sick of eating herring during Lent. The processions were often organized by butchers, because they have very little business during Lent. Other things done on Easter Saturday are priests blessing and distributing holy water. Each member of the household was sprinkled, and then the house and the cattle. Easter Sunday people eat large quantities of eggs. Eggs are often dyed or decorated and egg rolling used to be a favorite pastime.