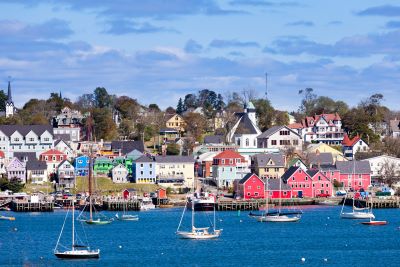 Take a Drive
Cape Breton is one of the top driving trips in North America, with rising, forest-green hills along the Cabot Trail that sweep you up into the sky and reveal magical views of the rugged coastline. Pretty villages dot the landscape in this breathtakingly beautiful part of the province. Another personal favourite, although not nearly as dramatic, is the road along the Bay of Fundy on Shore Rd. W., just north of Annapolis Royal. You’ll past clusters of small villages and pretty coves along the bay on a road that rises and falls with the gentle landscape. It’s an excellent cycling route.

Beautiful Giants
The Bay of Fundy is one of the richest marine environments in the world, with tons of tasty appetizers that attract humpback whales, right whales, minke whales and more. You can get whale-watching tours out of Digby as well as on the south shore and off Cape Breton, where pilot whales are said to be attracted by Celtic music played aboard the whale-watching ships. If the whales don’t cooperate you might spot Atlantic dolphins or seals.

Heavenly Halifax
If the weather’s good, don’t miss a stroll on the waterfront, with great food options that include rum cakes and the Garrison Brewery. Titanic fans will want to check out artifacts at the Maritime Museum of the Atlantic or cruise the city’s Fairview Cemetery, where you can find memorials to some of the dead. CBC star Rick Mercer has listed Da Maurizio as his favourite restaurant. It’s down on the waterfront, built inside a former brewery, and serves excellent Italian food. If you want a sense of old-time Halifax, it’stough to beat Press Gang on Prince St., with exposed stone and brick walls in a structure that dates to 1759. They serve up fabulous calamari and scallops.

Soak Up Some History
Port Royal, just outside of Annapolis Royal, was Canada’s first permanent European settlement. The French came in 1605 and settled on the pretty coastline with its fine harbour. You can do tours of the old settlement. Just across the bay in the centre of Annapolis Royal is Fort Anne, which was controlled at various times by the Scots, French and English and is said to be the most fought-over piece of real estate in the country. There’s a small, nice museum. Of course, there’s always a tour of the Halifax Citadel, which occupies prime real estate above downtown. Check the old barracks and watch young men in crisp British costumes parade about the grounds. And this year marks the 300th anniversary of the fortress of Louisbourg , on the eastern coast of Cape Breton Island. They offer excellent tours.

Inland Exploring
Not all the charms of Nova Scotia are on the water. Kejimkujik is a large national park in the southwest part of the province. The drives are beautiful but there also are hiking trails and some lovely spots for canoeing or kayaking. Great fishing, too, in a park where you have a good chance of spotting a moose or maybe even a bear. 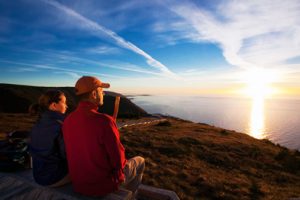 Hit the Coast
You can visit Nova Scotia without visiting Peggy’s Cove, but you shouldn’t. Yes, it can get crowded in summer but it’s a stunning spot, with that famous lighthouse and the rounded rocks and the endless views out to sea. The south coast of the province near Lunenburg and Mahone Bay features beautiful villages with towering, white church spires and quiet streets. Don’t miss the quintessential — and quiet — fishing village of Blue Rocks, just minutes from Lunenburg. The beaches along Cape Breton and near Digby are a beachcomber’s delight. And there are great stretches of sand near Halifax, including Lawrencetown (great surfing too), Conrad’s Beach and the five-kilometre stretch of Martinique Beach. Further afield, try Tor Bay near the town of Larry’s River (between Cape Breton and Halifax). Still more great kayaking can be found along Chignecto Bay in the Bay of Fundy and in the Minas Basin near the town of Parrsboro.

Sip & Slurp
Nova Scotia is home to an increasingly sophisticated wine scene, with the best stuff coming out of the Annapolis Valley near Wolfville, a fun town that’s home to beautiful Acadia University and a great B & B called the Blomidon Inn. Domaine de Grand Pré has a lovely, bright tasting room and some pretty good whites, plus a highly rated restaurant. Up the hill a bit is Luckett Vineyards, notable for some tasty reds and whites and pretty views. Note the bright red British phone booth in the vineyard near the tasting room, where you can make free calls to any place in the U.S. or Canada. More of a beer drinker? Halifax is home to Alexander Keith’s brewery, and there’s a fun if slightly cheesy tour you can take. One fun spot for a tipple is The Economy Shoe Shop on Argyle St., with a funky series of rooms.

Come Sail Away
Try a boat ride on the famous waters around the province. There are numerous options in Halifax harbour, including a boat made out to look like a cartoon tugboat. Or even a beautiful tall ship through Murphy’s Tours. There are many large lakes in the province, too. Sailing is quite popular on Bras d’Or Lake on Cape Breton. Or take a charter out of legendary Lunenburg, home of the recently restored Bluenose II.

Take a Driver
One of Canada’s best and most historic courses is on Cape Breton. And so is one of the country’s best and newest. Highlands Links is a gorgeous layout designed by legendary architect Stanley Thompson at Ingonish Beach and opened in 1941. A great test of golf, with beautiful ocean views. On the opposite side of the island in Inverness is Cabot Links , a new design that’s the only authentic links-style course in the country. Every hole has an ocean view and five holes are along the beach. An absolute stunner, and now with accommodations on site. Elsewhere, Fox Harb’r is a stunning layout overlooking the province’s north coast.

Shop ‘Til You Drop
Spring Garden Rd. in Halifax attracts shoppers galore with a series of fun shops. A personal favourite of mine is Biscuit General Store on Argyle St., with vintage pop culture items and gag gifts as well as books and shoes and fun fashions, all in a crazy, eclectic atmosphere. Lunenburg features several small independent shops selling cookware, kitchen items and just about anything you can think of with a sailing or lobster theme. Lucky Lou’s in Annapolis Royal sells clothing, Bozo the Clown punching bags, guitar-shaped cheese graters and much more. Also check out Antigonish, home of St. Francis Xavier University.