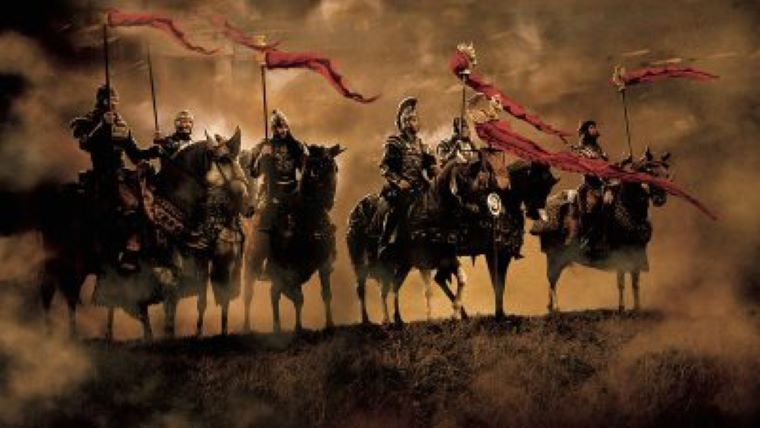 In the popular imagination, King Arthur is often associated with medieval knights in shining armour, but archaeologists agree that the story is much older. It’s believed that Arthur united Britain to fight off Saxon invaders around the fifth century, but everything else about him — his connection to the wizard Merlin, his wife Guinevere, his half-sister Morgan Le Fay — belong to the world of mythology. Did Arthur even exist? We don’t know. He could have been Riothamus, a Romano-Britain who disappeared in the French town of Avallon after fighting the Visigoths around the year 470A.D. Or maybe he was Arturius, a sixth century Scot who allied with the kings of Britain to fight the Saxons and had a half-sister named Morgan. Most likely he is an amalgamation of Arthurs from that period.

Despite the lack of evidence for a real-life Arthur it is easy to find sites in Britain claiming a historical connection to the man author T.H. White described as  “the once and future king”. These locations attract thousands of visitors on a kind of Arthurian pilgrimage. Tintagel Castle in Cornwall, the supposed birthplace of Arthur, drew 174,000 visitors last year, according to the Association of Leading Visitor Attractions. Whatever the truth of the Arthur legends, the rich beauty and history of these sites in Southwest England is undeniable. 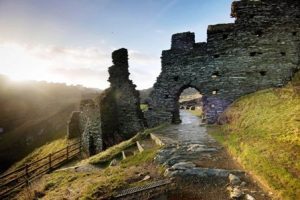 The dramatic grey ruins of the stone castle perch atop the craggy coast in stark contrast to Cornwall’s emerald-green countryside and the blue Celtic Sea. Tintagel is an enchanting site for an Arthurian myth. It was at Tintagel that, according to Geoffrey of Monmouth, the wizard Merlin bewitched Uther Pendragon to look like Duke Gorlois so he could bed Gorlois’ wife, Igraine, and conceive Arthur.

As you climb the 100 steps to reach Tintagel Island (actually a peninsula) you can’t help but wish that Geoffrey of Monmouth was right when he said this dramatic spot was the birthplace of the Once and Future King. It’s easy to see why both Monmouth and the poet Alfred Lord Tennyson were so inspired by Tintagel. Glancing down the rocks at the beach below, you can spot Merlin’s Cave where Tennyson said the baby Arthur washed up on shore. If the tide is low, you can stroll down to the beach and explore the cave. It is “a wonderful place with a wonderful magical feel,” Claudine Cross, a recent visitor from Bournemouth told Celtic Life International.

So, it is almost a disappointment to discover that the castle ruins only date to the 13th century. There have been other ruins though. Evidence suggests the peninsula was occupied as early as Roman times (sometime around 300A.D.) and a Celtic monastery once stood there. However, it wasn’t until the 1998 discovery of a piece of slate, thought to be a dedication to a ruined building, that a connection with Arthur was found. Inscribed on the slate are the words “Artognou, father of a descendant of Coll, has had (this) made”. Artognou is Latin for Arthnou. 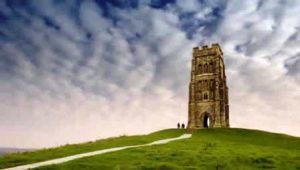 The sloped hill of Glastonbury Tor rises 521 feet above the Somerset countryside like a beacon calling to visitors. Atop the Tor, sits the 14th century tower of the church of St. Michael. Years ago, a lake of water surrounded the mound-shaped hill.

The Tor has long been connected with Celtic mythology. Legend says that beneath the Tor lies Annwn, home of Gwynn Ap Nudd, Lord of the Underworld. The gateway to Annwn is through Avalon, and thus the Tor is believed to be the place where Arthur came to heal his wounds. The Tor is also said to be the location of the Holy Grail, after Joseph of Arimethea buried it at the base of the hill.

On the Tor, you will find a mix of New Age travelers hoping to retrace the steps of Arthur, as well as hikers out enjoying expansive views of Somerset.  “I’m not a believer in the mysticism of Glastonbury,” Sharon Davies a recent visitor to the Tor said, “but I met some wonderful characters whose enthusiasm for the area was infectious.”

Gaze to the south and you glimpse the ringed features of nearby Cadbury Castle. To the west lies Brent Knoll, an Iron Age hill fort. The climb is steep, but once you reach the top and walk through the ruins of the medieval church, it is easy to understand why visitors feel so drawn. As Sian, a visitor from Cardiff said, the Tor is “a mystical place.” 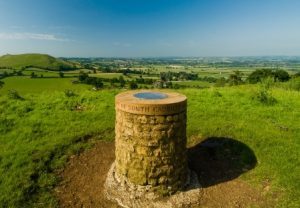 Just 15 miles from Glastonbury, South Cadbury Castle is said to be King Arthur’s Camelot. Camelot was King Arthur’s legendary court and first made an appearance in a 12th century poem called Lancelot, the Knight of the Cart by Chretien de Troyes.  The site of the castle is a hilltop fort rising 492 feet and ringed by terraced banks. Local legend says that Arthur and his knights lie sleeping below in a hidden cave.

The hilltop fort has a long history of occupation, dating from the Bronze Age. Recent archaeological excavation uncovered a large timber feasting hall dated to the fifth or sixth centuries, along with fragments of Tintagel pottery from the same period. While links to Arthur are tenuous, one thing is clear: Cadbury Castle belonged to a high king and was designed to hold a large army of the kind Arthur might have had.

Today, little remains of the castle. After making the long trek up the hill, the only thing that tells the traveler he has arrived at Camelot is a stone cairn and plaque. Although the climb is steep, the hike is tranquil and the view at the top breath-taking. Jan Suchaki, a traveler from Taunton, described it as “a place to sit and stare and think about all those many lives that have come and gone.” 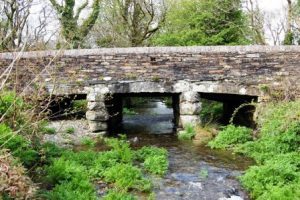 In The History of the Britons, Nennius wrote that Arthur fought in twelve major battles. His final one was the Battle of Camlann around 537 A.D. According to the Annals of Wales, found at the monastery at St. David’s in Wales,  Arthur is said to have either died or been fatally wounded at Camlann by his enemy Mordred. It is unknown where the true Battle of Camlann took place. However, Geoffrey of Monmouth said the battle occurred by the River Camel, and was so gruesome the water ran red with blood.

Gazing about the peaceful English countryside beside the River Camel it is difficult to believe such a battle could have occurred here. However, archaeological evidence suggests that a fierce battle really did take place at Slaughterbridge, in the ninth century when the Cornish Celts fought invading Saxons. Most likely, this is how the association with the Battle of Camlann came about.

Close to the bridge, lies a stone said to mark the place where Arthur fell. The stone was first discovered in 1602 and is inscribed in both Latin and Ogham, a sixth century Celtic script. Although the Ogham is incomplete, the Latin reads: “The Stone of Latinus, here lies the son Magarus.”

None of this offers a real connection to Arthur, yet the legend of Arthur and Slaughterbridge remains strong. Nearby, sits the Arthurian Centre, a museum devoted to King Arthur. At the centre you can learn about the Battle of Camlann and the real battle that took place on the banks of the River Camel.