For the Love of Lagavulin 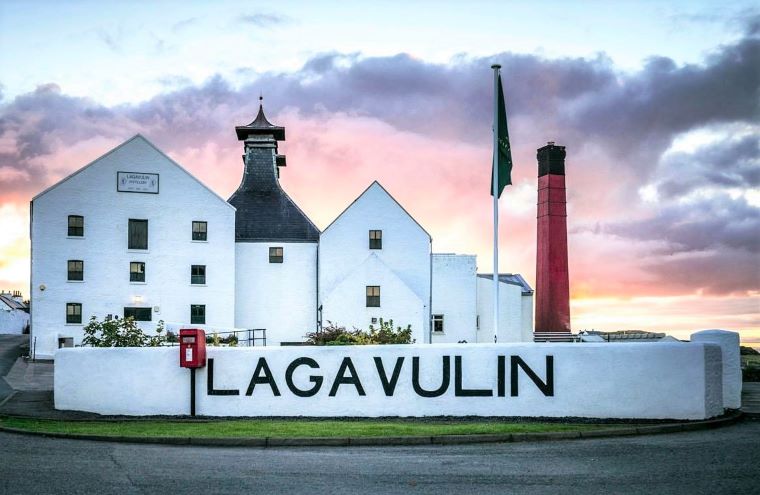 Lagavulin Distillery is nestled between Laphroaig and Ardbeg, on the southern coast of the Scottish Isle of Islay. The Queen of the Hebrides, as Islay is known, played a seminal role in the history of Scotland and the United Kingdom. The Lords of the Isles ruled the west coast of Scotland and parts of Northern Ireland from Islay, independent of England, Scotland, and Denmark, until 1493 – nearly four centuries. After their defeat, the title ‘Lord of the Isles’ was incorporated into the Scottish, and eventually British, Royal Families. Today, in addition to being the Prince of Wales, Charles is also Lord of the Isles.

The base of power for the Lords of the Isles was set on two tiny islands in Loch Finlaggan, not far from Port Askaig, in the north of the island. But Islay’s southern shore was also a power center. Remnants of this history can be seen at the haunting Kildalton Chapel, where a well-preserved 8th century Celtic Cross was found. The coast is rugged and dotted with small, sheltered bays, including the one which protects Lagavulin. At the entrance to that bay, the ruins of the once impregnable Dunyvaig Castle can still be seen.

Lagavulin translates from Scots Gaelic to “Mill Hollow” and is believed to be one of the oldest settlements on the island.

Lagavulin Distillery was officially established in 1816, but there is some evidence of no fewer than 10 small, illicit distilleries operating on or near the site as early as the 1740s. The Victorian whisky writer Alfred Barnard references a smuggling fraternity operating in the area as early as 1742. By 1816 the various operations had merged into a pair of side-by-side distilleries, Lagavulin and Ardmore, both of which had gone legit. 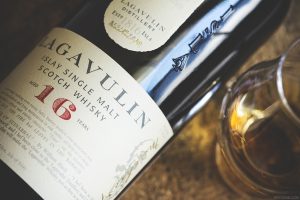 The Johnson family, founders of Lagavulin, acquired Ardmore in 1825 and by 1837 had absorbed it into the Lagavulin complex. The distillery began to attract wider acclaim in 1862 after it was purchased by the Blender Logan Mackie. Logan’s nephew Peter Mackie would become one of the pivotal figures in the Scotch whisky industry of the late 19th century. Peter Mackie took charge of Lagavulin in 1878 and would also go on to establish the Craigellachie Distillery and found the White Horse blend.

In addition to Lagavulin, Mackie also represented the nearby Laphroaig Distillery, situated just two miles down the coast in another small bay. When this relationship ended in 1906 Mackie was incensed. He set about building a nearly perfect replica of Laphroaig at Lagavulin, and even poached a few of its employees. The new distillery was called Malt Mill, and while the heavily phenolic whisky was of good quality, the gamble never quite paid off – at least not in the way Mackie had hoped. Try as he might, he just could not quite replicate Laphroaig. Malt Mill ceased production in 1962 and has never been seen as a single malt.

In 1927, White Horse Distillers, including Lagavulin, became part of DCL, a forbearer of Diageo, the world’s largest drinks company. The whisky was selected by the firm as one of its six Classic Malts in 1988, giving birth to Lagavulin 16 Year. A famous whisky writer, Michael Jackson, referred to it as the Aristocrat of Islay, for its elegant smoky profile. Incidentally, this was the whisky which got me interested in Scotch, and it remains a benchmark by which other mature Islay whiskies are still measured today.

In addition to the 16 Year there are annual releases of Lagavulin Distillers Edition (finished in PX Sherry) and a 12 Year Cask Strength. The most recent edition to the core range is an 8 Year, first released as a limited edition in 2016 to celebrate the distillery’s 200th Anniversary. It is a feistier expression, inspired by Alfred Barnard’s visit to the distillery in 1880s.

Lagavulin is open to the public for tours and tastings. If you decide to visit, I recommend taking the warehouse tour. And while there, do not pass up the opportunity to wander out to the Dunyvaig castle. The view looking back at the distillery is worth the walk! ~ By Andrew Ferguson