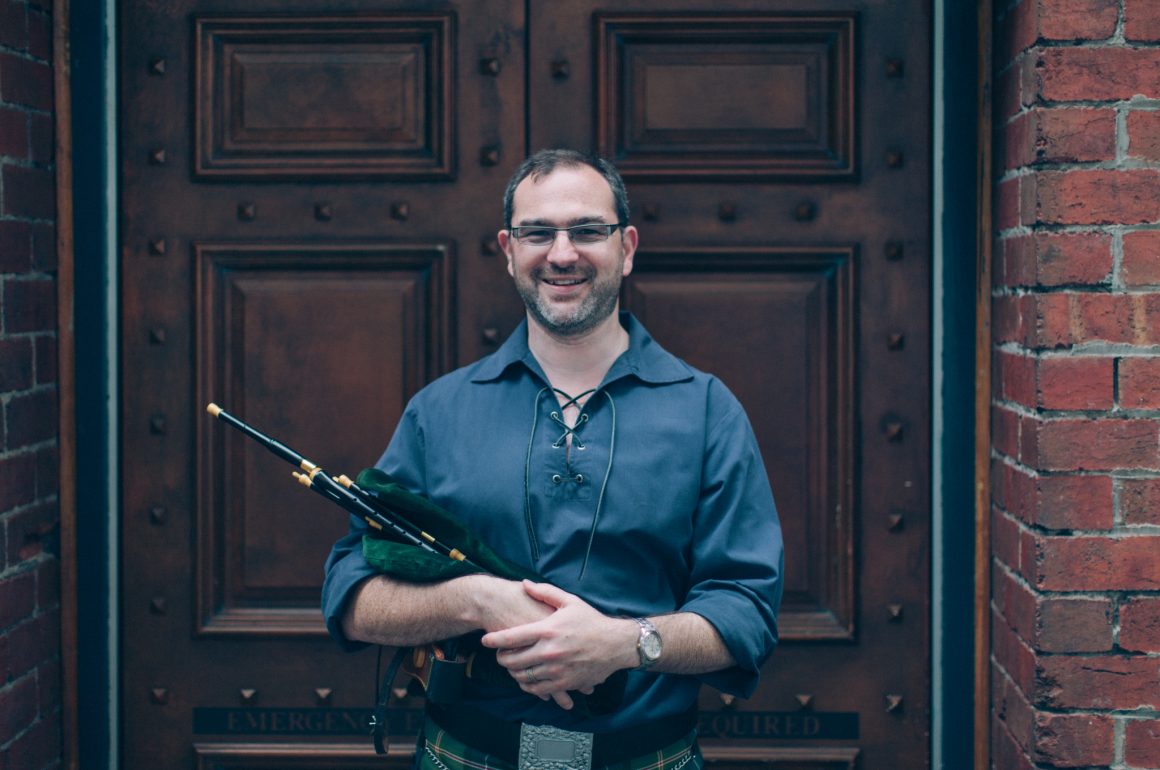 Although he resides in the ‘land down under’, Geoff Jones enjoys a strong connection to his Scottish ancestry, due in large part to his maternal grandfather’s passion for the family’s history and heritage. He also has Welsh and Cornish roots.

“Scottish Country dancing was a big part of my life growing up, going along to the weekly classes and social dances,” shares the 42-year-old from his home in Geelong, Victoria, Australia. “And participating in dancing demonstrations at the local Highland Gathering drew my interest toward the Highland pipes.”

His first piping stint was with the City of Berwick Pipe Band in September of 1988. Soon, piping found its way into other areas of his life, including his studies, where he wrote “many school projects on the topic, including designing and making a set of electronic bagpipes.”

“I studied the Highland pipes for a year 12 music subject,” he continues. “I keep exploring and learning more about the different bagpipes and have a continued love of Scotland. My piping today still follows these obsessions.”

Jones worked his way up through the musical ranks, eventually reaching Grade 1 with the Nunawading Pipe Band. These days, he plays several styles of pipes: the well-known Great Highland bagpipes, the Border/Lowland pipes, the Scottish small-pipes, and the Northumbrian small-pipes. He is also in the process of learning the Irish uilleann pipes. 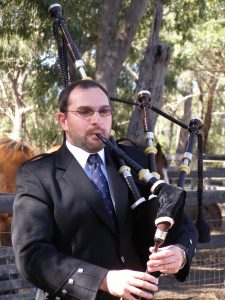 Jones is adept at other instruments as well, including the whistle and the bodhràn. He has also dabbled in keyboards and the piano-accordion. Piping, however, remains his true passion.

“Getting the sound and tone right, or at least acceptable, when the pipes are amplified – particularly small-pipes – is often a challenge. Just as challenging for me, and most pipers I would assume, is when sound technicians at festivals crank up the overall band volume far too loudly – akin to a rock concert. This just doesn’t work for the more mellow sound and acoustic instruments of a folk band.

In addition to festivals, Jones has performed at weddings, parties and other social events, as well as at professional functions. He also plays with four other musicians in a Scottish folk band called Taliska – a play on the Whisky brand-name Talisker – a word originally derived from Scottish Gaelic talamh sgeir or talaisgeir meaning “land of the cliff/sloping rock.”

Jones passes his passion along as well, offering workshops on tuning, maintenance, playing techniques and styles.

“Here in Victoria, interest from young pipers appears to be quite strong.”

“The number of high school pipe bands has increased over the last 10 years. In addition, several civilian bands usually have enough young pipers to field juvenile bands in competitions. Young folk also account for a large percentage of the pipers, and drummers, competing in solo contests.”

He notes, however, that overall preservation of Celtic culture in Australia appears to be mixed.

“Unfortunately, the attendance at Highland Gatherings and Games has declined in Victoria in the past few years. This, along with other factors – such as lack of funding -has resulted in a number of the Highland gatherings being discontinued. Celtic festivals, on the other hand, seem to be generally well-attended. The National Celtic Festival in Portarlington attracts international artists and has a substantial program for young folk, including collaboration with Feis Rois from Scotland. Some events in Australia such as the Lake School of Celtic Music, Song and Dance in Koroit are modelled on overseas festivals such Willie Clancy Week and continue to grow each year. There are also traditional music, dance and cultural groups around Australia that continue the traditions.”

Jones is at the helm of one of those cultural groups as a founding member and current president of the Celtic Piping Club – a community for pipers across the country, which runs regular piping sessions, concerts and an annual residential piping weekend.

“Our aim is to carry-on these great musical traditions by establishing links with individuals and small groups of pipers all around Australia.”