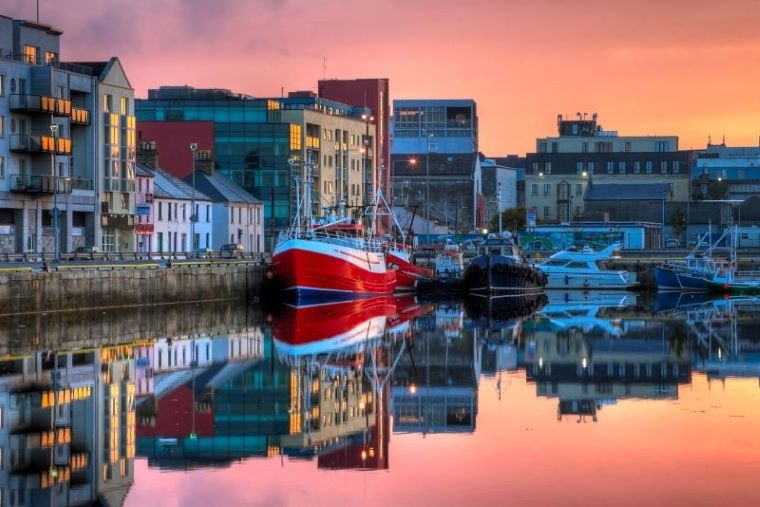 A city streaked with canals on the Corrib River, Galway is affectionately called the “City of the Tribes.” That name recalls the 14 families that controlled trade and politics on Galway from the 13th to the 19th centuries. And what’s exciting is that there are still hints of the tribes to be found, like Lynch’s Castle, a 16th-century fortified limestone house with the Lynch coat of arms on its front. Galway is a hotbed of traditional Irish music, as you’ll find out walking the lively pedestrian streets of the Latin Quarter, where buskers abound and there’s always music and dancing in the pubs. In the bay you can sail to the verdant Aran Islands pummelled by the Atlantic and where it feels like time has stood still for hundreds of years, while on land the Wild Atlantic Way will get you to two National Parks inside 90 minutes of Galway.

Let’s explore the best things to do in Galway.

Latin Quarter
A hook-shaped district of cobblestone streets in the old centre of Galway, the Latin Quarter is on the left bank of the River Corrib from O’Briens Bridge down to the Spanish Arch. In this small and sociable place you’ll come by many of Galway’s favourite pubs, bars, restaurants, galleries and shops. If you’re on the hunt for classic Irish arts and crafts you’ll be in luck at the Latin Quarter, where shops like the Galway Woollen Market abound with traditional knitwear and are stocked with the local pure wool you’ll need for your own project. Street-performers and entertainers provide a constant folk soundtrack whether you’re window shopping, seeing the sights or bar-hopping.

Eyre Square
Galway’s main public space is just up from the Latin Quarter and was originally a town green in front of the old gates, used for markets. In the 2000s Eyre Square was completely re-landscaped at huge expense, becoming a modern plaza. One of the newer works of art is the Quincentennial Fountain with an abstract depiction of one of Galway’s typical “Hooker” – sailboats. There’s a bronze cast of a statue of Pádraic Ó Conaire, one of Ireland’s foremost Irish-language writers, and a bust of John F. Kennedy who had the freedom of Galway. The 14 Tribes of Galway are also represented with flags bearing the family colours. The Eyre Square Centre on the south border of the square is Galway’s prime shopping centre, with more than 70 high street chains and eateries.

Quay Street
Sloping down to the river in the Latin Quarter, Quay Street is a fun and friendly pedestrian artery with colourful storefronts, trendy shops and restaurant and bar terraces under awnings. Rain or shine there are buskers along the way playing jaunty tunes. There’s a fun, welcoming buzz in all the pubs, which also have live music, dancing and reasonable prices despite being bang on the tourist trail. Between the eateries and bars are stores like Twice as Nice, purveying vintage clothes and wool, or the Wooden Heart next door, making its own traditional wooden toys. 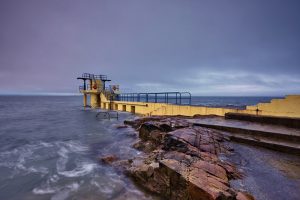 Salthill Promenade
Head southwest of the city centre and you’ll soon come to the Salthill Promenade, two kilometres long with a beautiful perspective from the north side of the bay. If you’re fortunate enough to walk the promenade when the skies are clear you’ll see the outline of The Burren down in County Clare, while up in the northwest are the peaks of Connemara. The land behind the promenade was set aside for farming until the Great Famine in the middle of the 19th century, and was then set up for early tourism in 1860 with the arrival of the Eglinton Hotel, which is still here today. The promenade is lined with bars, seafood restaurants and cafes. You can drop in at the Galway Atlantaquaria, run by the National Aquarium of Ireland, or watch the yacht sails zipping across the water in summer.

Galway Cathedral
To look at Galway Cathedral you could be mistaken for thinking that this dignified limestone construction is centuries old. In truth it was begun in 1958 and completed in 1965, on the site of Galway’s old city prison. The architecture is a big jumble and has Romanesque influences in its plain walls and narrow semi-circular window arches, Gothic in its traced rose above the main portal, and Renaissance in its barrel vault and magnificent dome reminiscent of Il Duomo di Firenze. The windows are the work of British stained-glass artist Patrick Pollen, who also produced a mosaic depicting the crucifixion and St Joseph the Worker, while the German-Irish sculptor Imogen Stuart created an image of the Virgin Mary.

St Nicholas’ Collegiate Church
Dating back to 1320, this church is Ireland’s largest medieval parish church hosting regular services. It is dedicated to St Nicholas of Myra, the patron saint of seafarers and constructed from Galway’s signature grey limestone. In the middle of the 17th century the largest body of Irish genealogical lore, Leabhar na nGenealach, recording the heritage of families across Ireland, was written at this very place. Most of the architecture is from the 14th and 15th centuries when the church was enlarged. You can find evidence of iconoclasm inside, carried out by the Puritan Oliver Cromwell’s troops in the 17th century. The baptismal font is from roughly this period and has an image of a dog carved into its side, while the oldest ledger stone in the church belongs to one Adam Bures, dating back to the 1200s.

Galway City Museum
By the Corrib River, the Galway City museum opened in a new building in 2007 and is a free and multifaceted attraction covering Galway’s archaeology, folk history, art and natural history. You can see a traditional Galway sailboat, known as a “hooker”, and the “Great Mace” a magnificent piece of ornamental silverware produced in Dublin at the start of the 18th century. Fragments from the 16th and 17th centuries are presented in the “Medieval Stone Collection”, which has corbels, plaques, coats of arms, chimney fragments and two complete 16th-century fireplaces. There’s also a photography gallery documenting the city from the 1950s onwards, and artefacts like pipes, bottles and tin signs from Galway’s pubs dating to the 19th and 20th centuries.

Kirwan’s Lane
Named after one of Galway’s 14 Tribes, the quaint Kirwan’s Lane lies inside Galway’s former city walls. This tight pedestrian street curves through a ravine of rustic stone houses that have elements dating back to the 16th and 17th centuries. These buildings hold pubs, restaurants, cafes and arts and crafts shops, and outdoor tables skirt the path when the weather’s good. Busker Browne’s Pub here has the vestiges of the Dominican Slate Nunnery, donated by John Kirwan in 1686. 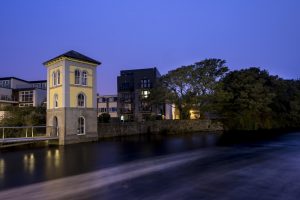 Spanish Arch
Right in front of the Galway City Museum are the last surviving arches of the Ceann an Bhalla, or Front Wall. Known as the Spanish Arch, this structure was part of defence running from the old Martin’s Tower to the Corrib River to defend Galway’s quays. And while the arches aren’t exactly a stirring monument it’s worth remembering that they date all the way back to 1584, and also sustained damage from the tsunami caused by the Lisbon Earthquake of 1755.

Corrib Princess River Cruise
May to September you can catch this boat up the River Corrib to the lake (lough) of the same name. The Corrib River Princess sails twice a day from Woodquay in the middle of the city and on the 90-minute trip you’ll journey through green, pastoral countryside, with farms on the south and east shore of the lake and heath and bog to the north and west. The lake is also loved for its many islands, with more than 1,300 at the last count. On the river you’ll pass the ruins of Menlo Castle, a 16th-century mansion that burnt down in 1910 and is now completely taken over by ivy. The Corrib Princess sets off at 12:30 and 14:30, and there’s an extra trip at 16:30 in July and August.

Fishery Watchtower Museum
The only building of its kind in Ireland, the Fishery Watchtower is a Victorian “draft netting station.” It was built in a neo-Romanesque style in 1853 as a way of keeping an eye on fish stocks and spotting any illicit fishing on the river. “Draft netting” was a way of catching salmon by suspending a single net between the shore and a rowboat. The tower opened after a renovation in 2015 and contains a small but sweet free museum with fishing equipment, black and white photographs and tanks holding young salmon and elvers (eels).

Lynch’s Castle
At the corner of Shop Street and Abbeygate Street is a robust limestone house that stands apart from the buildings around it. This is Lynch’s Castle, a fortified house that could go back as far as the 14th century but got its current design in the 16th century. The house afforded extra protection from raids to its owners, the Lynch family who had Anglo-Norman roots and were one of the 14 tribes that held sway in Galway in the period. In 1493 when James Lynch Fitzstephen was mayor of Galway he hanged his own son from a window here for killing a Spanish sailor. On the main facade you’ll find the Lynch family coat of arms, and there’s another framed panel sporting the coat of arms of Henry VII, who reigned from 1484 to 1509.

Wild Atlantic Way
Galway is on a feted tourist trail that clings to Ireland’s west coast for 2,500 kilometres from the country’s northernmost point at Malin Head in town to Kinsale Harbour in the very south. Galway is roughly at the halfway point and has amazing road trips to the north and south. You could head down into The Burren in County Clare, where there’s an otherworldly glaciated kast landscape full of photogenic rock formations like limestone pavement. Head up the coast and you’ll come to the Connemara National Park, which has over 50 peaks in four mountain ranges. The cone-shaped Diamond Hill from the village of Letterfrack has one of Ireland’s best hikes, past a 5,000-year-old tomb and up to a summit blessed with far-off mountain and ocean views.

Aran Islands
Where Galway Bay joins the Atlantic is an archipelago of small rocky islands that you can reach by ferry. At the height of summer there’s a handy inter-island service allowing you to jump from place to place. The farming communities on the Aran Islands came about after centuries of ploughing and enriching the soil with seaweed, and in their isolation the Aran Islands have kept a quiet rural character that can’t easily be found in modern Europe. For one, Irish Gaelic is still the first language here. The islands are still defended by prehistoric forts like the awesome Dún Aonghasa, posted atop 100-metre-high cliffs on Inishmore. The islands’ pastures are criss-crossed by limestone dry-stone walls that have stood for centuries, and hiking trails will lead you to cliffs and beaches battered by the Atlantic, hollowed-out Medieval churches and yet more Neolithic forts.

Dunguaire Castle
Rumoured to be the most photographed castle in Ireland, the 16th-century tower house is undoubtedly picturesque. You can find it about half an hour from Galway on an outcrop on the south side of the bay, surrounded on all but one side by water. Both the 23-metre tower and its encircling wall date back to 1520 when they were put up by the Hynes Clan, which had been in this region for a millennium. The castle was restored in the 1920s by Oliver St John Gogarty, whose guests included literary greats like W.B. Yeats, Lady Gregory and George Bernard Shaw. In the summer you can go in for a “Dunguaire Castle Banquet”, to feast on medieval-style fare and be regaled by live entertainment, particularly the poems of Yeats, Gogarty and Shaw.