Irish evolved from a form of Celtic Gaelic introduced into Ireland during the great Celtic migrations between the end of the second millennium and the 4th century BC.

Celtic refers to a family of languages and means “of the Celts” or “in the style of the Celts.” The link between language and artifacts dug up is confirmed by the inscriptions found on those artifacts. Celtic culture is diverse, but what pulls it together is the use of a Celtic language and is what they have in common.

They are called Insular because they were spoken only on the British Isles and survived much longer that the Celtic languages of continental Europe. 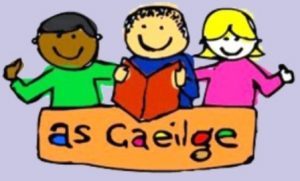 The Goidelic language historically formed a dialect continuum stretching from Ireland through the Isle of Man and to Scotland.

These three languages are classified as Insular Celtic or Q-Celtic. The names used in all three of these languages are derived from Old Irish Goidelc, which actually derives from Old Welsh, Guoidel, which means “pirate or raider.”
These Celtic languages all have a similar grammatical structure, but have little vocabulary in common.

Goidelic was once restricted to Ireland and possibly the west coast of Scotland. Medieval Gaelic literature tells us that the Gaelic kingdom of Dai Riata emerged in western Scotland during the 6th century.

The traditional view is that the Gaelic language was brought to Scotland by settlers from Ireland who founded Dai Riata.

Recent archaeologists and linguists though have argued that there are no archaeological or place names evidenced for a migration or takeover by a small group migrating to Scotland.

The kingdom of Dia Riata grew in size, influence and Gaelic language and culture and was eventually adopted by the neighboring Celtic Picts who lived throughout Scotland.

Manx is the Gaelic language spoken on the Isle of Man and is close to the Gaelic spoken in the Hebrides and the Irish spoken in the northeastern and eastern Ireland and the now extinct Galwegian Gaelic of Galloway (in southwestern Ireland) with some influence from Old Norse from the Viking invasions.

Examples of these writings were found throughout Ireland and on the west coast of Great Britain. Usually the Ogham script gave the name of a person or ancestor that were probably commemorative. This primitive Irish evolved into Old Irish through the 5th century AD.

Old Irish, dating from the 6th century used the Latin alphabet. During this time, Old Irish absorbed and borrowed many Latin words, including ecclesiastical terms. Old Irish is the earliest variant of the Celtic Gaelic language.

By the 10th century Old Irish was evolving into Middle Irish which was spoken throughout Ireland, Scotland and the Isle of Man. It is the language of a large bit of literature including the Ulster cycle of literature.

By the 12th century, Middle Irish was evolving into Modern Irish in Ireland, into Scottish Gaelic in Scotland and into Manx on the Isle of Man. 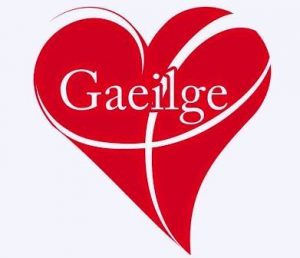 Early Modern Irish, also known as Classical Gaelic, from the 13th century on, was the basis of the literary language of both Ireland and Gaelic speaking Scotland. During this time Ireland was considered the Gaelic homeland to the Scottish literati.

Modern Irish was spoken and written from the 17th century on and about the time of the writings of Geoffrey Keating and was the medium of popular literature.

By the mid 18th century, English not only became the language of the government but of the Catholic middle classes, the Catholic Church and public intellectuals. As the value of English became apparent parents sanctioned the removal of the Irish language in schools.

The Great Famine (1845-49) was the final catastrophic event that brought about the decline of Irish in Ireland and English replaced the Gaelic Irish language.

However, in the 19th century, there was a Gaelic Revival begun by the recently formed Gaelic League in an attempt to encourage the learning and use of Irish though few adult learners mastered the language. The revival also focused on the Irish folk and myth traditions.

From the 17th to early 20th centuries, the Irish language was gradually replaced by English in most parts of Ireland.
However, today, there are three main dialects of modern Irish spoken in Ireland: Munster (An Mhumhain) – spoken mainly in Kerry and Muskerry in the western part of County Cork, Connacht (Connachta) – spoken mainly in Connemara, the Aran Islands and Tourmakeady in County Mayo; Ulster (Ulraidh) – spoken in the Rosses.

The Official Standard Irish was developed during the 1950’s and 60’s and combines the elements from all three major dialects and its pronunciation from the Connacht dialect. This is the form of the Irish language taught in most Irish schools.

In 1922, the Republic of Ireland was born and the official language became Irish adopted along with English. Irish government and civil servants are bilingual.