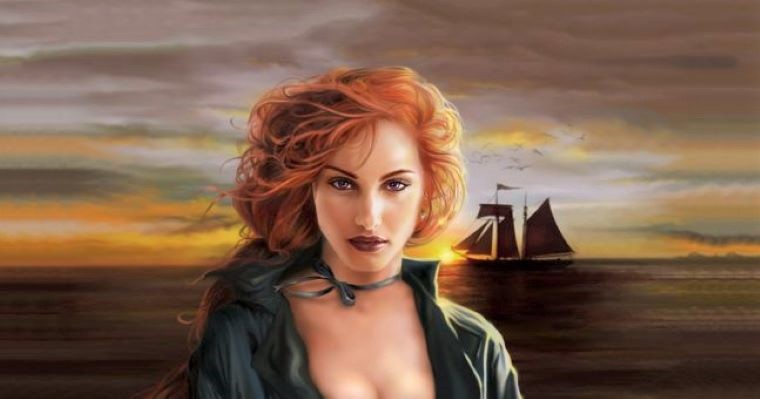 Grace O’Malley was Queen of Umaill, chieftain of the O Maille clan, rebel, seafarer, and fearless leader, who challenged the turbulent politics of 16th century England and Ireland. While Irish legends have immortalized Grace as a courageous woman who overcame boundaries of gender imbalance and bias to fight for the independence of Ireland and protect it against the English crown, to the English, she was considered a brutal and thieving pirate, who controlled the coastlines through intimidation and plunder.

Grace O’Malley was born in Ireland in around 1530, as a daughter of the wealthy nobleman and sea trader Owen O’Malley. Upon his death, she inherited his large shipping and trading business. From her earliest days, she rejected the role of the sixteenth century woman, instead embracing the life on the sea with the fleet of O’Malley trading ships. The income from this business, as well as land inherited from her mother, enabled her to become rich and somewhat powerful.

During a time when Ireland was ruled by dozens of local chieftains, O’Malley – also known in legends as Granuaile – commanded hundreds of men and some 20 ships in raids on rival clans and merchant ships. She also ran afoul of government officials, who made repeated attempts to curb her activity

Under the policies of the English government at the time, the semi-autonomous Irish princes and lords were left mostly to their own devices. However this was to change over the course of O’Malley’s life as the Tudor conquest of Ireland gathered pace and more and more Irish lands came under their rule. 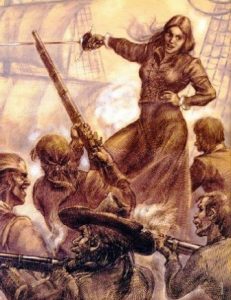 The O’Malleys were one of the few seafaring families on the west coast, and they built a row of castles facing the sea to protect their territory. From their base at Rockfleet Castle, they reportedly attacked ships and fortresses on the shoreline, plundered Scotland’s outlying islands, and taxed all those who fished off their coasts, which included fishermen from as far away as England. O’Malley’s ships would stop and board the traders and demand either cash or a portion of the cargo in exchange for safe passage the rest of the way to Galway. Resistance was met with violence and even murder.

Ambitious and fiercely independent, her exploits eventually became known through all of Ireland and England. By March, 1574, the English felt they could no longer ignore her ‘predatory sieges’, so a force of ships and men laid siege to O’Malley in Rockfleet Castle. Within two weeks, the Pirate Queen had turned her defense into an attack and the English were forced to make a hasty retreat. But such victories could not go on forever. The English had been changing the traditional laws of Ireland, outlawing the system of electing chieftains, and O’Malley was a threat to their aims.

At the age of 56, O’Malley was finally captured by Sir Richard Bingham, ruthless governor that was appointed to rule over Irish territories. She closely escaped death sentence, and over the course of time her influence, wealth and lands faded, until the brink of poverty. After hearing about the capture of her brother and son, O’Malley petitioned the Crown for redress, and then set sail for England. During a historic 1593 meeting with Queen Elizabeth I, she somehow managed to convince her to free her family and restore much of her lands and influence.

During the 70 years of her life, Grace O’Malley built for herself a notable political influence with the surrounding nations, as well as great notoriety at sea, making her one of the most important figure of the Irish folklore. She successfully protected the independence of her lands during the time when much of Ireland fell under the English rule.

Grace O’Malley finally died around 1603, in Rockfleet Castle. Many folk stories, songs, poems, and musicals about O’Malley have continued to this day, preserving the legend of the Pirate Queen.