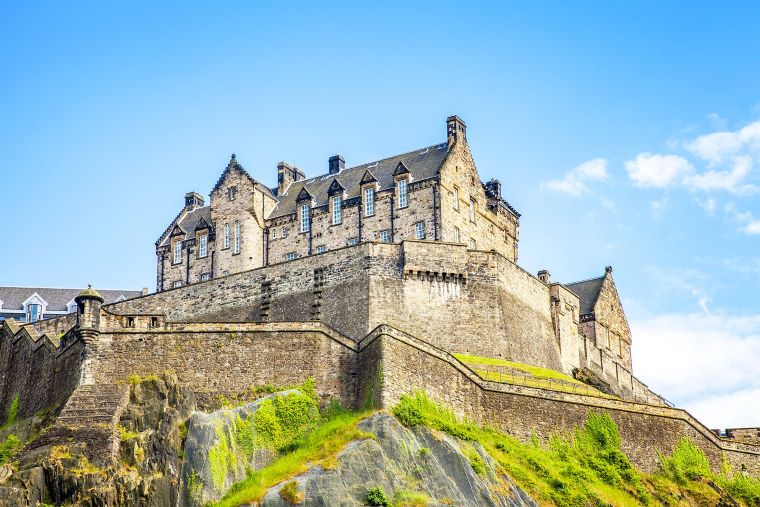 One of the best things about Scotland is that no matter where you find yourself, a castle is never far away. As integral to the Scottish landscape as its pristine lochs and lofty mountains, the country’s castles rank amongst the most iconic in the world. It is estimated that there were once up to 3,000 castles in Scotland – nearly one for every 100 square miles. Some grand estates allow an incredible stay in their historic rooms, some even allow camping in the stunning grounds outside.

Edinburgh Castle
Set atop a craggy extinct volcano high above Scotland’s capital, Edinburgh Castle is unquestionably Scotland’s most famous and important castle. This sprawling complex houses the Crown Jewels, the Stone of Destiny and Mons Meg. Get there in time for the firing of the One O’ Clock Gun.

Braemar Castle
Nestled amongst the majesty of the Cairngorms National Park, the 17th century fortress of Braemar Castle ticks all the boxes: castellated turrets, winding spiral staircases and a bottle-necked dungeon. Explore the grounds and find out more about Clan Farquharson.

Balmoral Castle
Queen Victoria lovingly described Balmoral as her ‘dear paradise in the Highlands’ and it remains a private home of the Royal Family. When not in residence, visitors can enjoy exhibitions in the Castle Ballroom, the largest room in the castle, and wander through the charming gardens and grounds.

Blair Castle
The white-washed Blair Castle stands proudly against a backdrop of wooded hills rising above the River Garry. The ancient seat of the Dukes and Earls of Atholl, it is also the home of Europe’s last remaining private army, the Atholl Highlanders. Explore its opulent rooms and its sprawling estate. 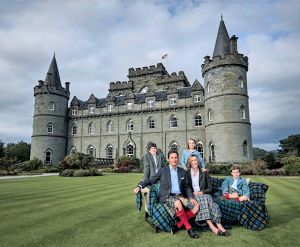 Inveraray Castle
The austere façade of Inveraray Castle, the seat of the Dukes of Argyll, stands in direct contrast to its sumptuous interior which embodies the pinnacle of 18th century neoclassical elegance. Admire the priceless Beauvais tapestries in the Drawing Room and outstanding views of Loch Fyne.

Cawdor Castle
The fictional home of the Thane of Cawdor in Shakespeare’s Macbeth, Cawdor Castle ranks among Scotland’s most enchanting castles. Celebrated for its fairy-tale edifice, its dramatic history and romantic gardens, parts of which are over 300 years old, a visit here is like stepping into bygone age.

Eilean Donan Castle
Eilean Donan has to be one of the most photographed castles in the world. Boasting a perfect picture-postcard setting on an island at the entrance of Loch Duich, Eilean Donan is steeped in Jacobite lore. Among the rare artefacts on display is a sword said to have been wielded at Culloden.

Dunnottar Castle
Dramatic doesn’t even begin to express the effect of this formidable cliff-top stronghold. Perched atop an immense rocky outcrop overlooking the north east coast, Dunnottar has witnessed many pivotal moments in Scotland’s history. The sight of it silhouetted against the setting sun is spellbinding.

Glamis Castle
The red sandstone walls of Glamis have been home to many colourful characters throughout the centuries, not least of them the late Queen Mother. It also famously features in Shakespeare’s Macbeth. Crowned with battlements and pointed turrets, Glamis is the epitome of baronial grandeur.

Stirling Castle
Meticulously restored to its original Renaissance glory, Stirling Castle was the favoured residence of the Stewart kings and queens. Bring the kids along to meet costumed courtiers, bodyguards and servants and step into a rarefied world filled with decadence, plots and intrigue.