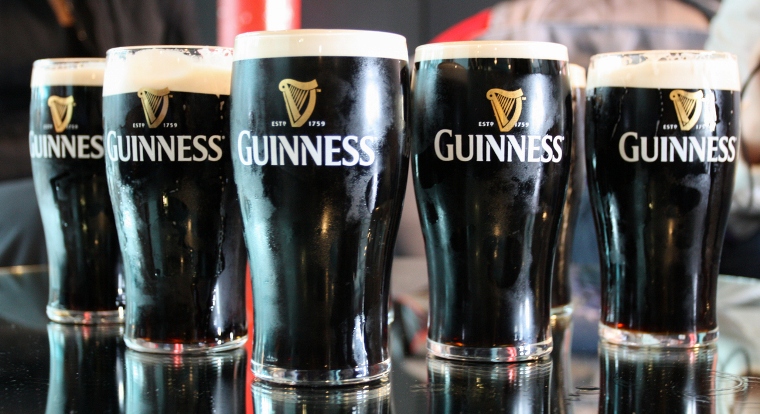 At nearly one billion liters of Guinness sold per year, it has become one of the world’s most recognizable Irish brands. And though it is brewed in over 60 countries and available in more than 120, there is only one which owes its very survival as a sovereign state to the Black Stuff.

Seventy years ago – February 1944 – and it is at last clear that the Allies are going to win the Second World War (1939-45). In Eastern Europe, the Red Army’s march west is gathering pace. In Italy, the Allied offensive at Monte Cassino is underway. And in Northern Ireland, in anticipation of D-Day, the number of British and American servicemen has swelled to 120,000. With this teeming garrison of Allied troops now making up one tenth of the entire population of the six counties, some fear a cross-border invasion. But for policy makers in Dublin, the build-up of troops north of the border is the surest sign yet that Éire will emerge from the war with her neutrality and independence intact.

The reason for this rather contented attitude south of the border lay in the title of a play that Irish author Flann O’Brien was writing at the time: “Thirst.” 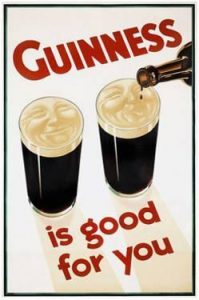 Back in 1938 and 1939, with European conflict on the horizon, Ireland was exporting around 800,000 barrels of beer annually. By 1940 and 1941, with war under way, this figure leapt closer to the million mark. These healthy export figures were thanks to the thirst for Guinness from the rapidly expanding number of men enlisted in the British military and wartime industries.

British Prime Minister Winston Churchill knew it was integral to the preservation of morale on the UK home front. By the end of 1941, however, wheat was becoming seriously scarce in Ireland. In fact, on all fronts, it looked as if Éire could not survive the war for much longer as a neutral country. This was because Churchill resented Irish neutrality. With one eye trained on control of the Irish ports and the other on the British-shipped supplies that neutral Ireland was eating up, he wrought revenge by subjecting the Irish people to an agonizing and unrelenting supply squeeze.

In an attempt to coerce Ireland onto the Allied side, Churchill oversaw the throttling of the Irish economy throughout 1941. Éamon de Valera’s Ireland, still without its own merchant navy and perilously reliant on British supplies, was now subjected to the full force of British economic warfare.

Attempting to deliver a death blow to the Irish agricultural economy, the British cut the vital annual supply of agricultural fertilizers to Ireland from 100,000 tons to zero. Likewise, the British supply of feeding stuffs was slashed from six million tons to zero. Petrol, too, was cut. At Christmas 1940, pumps across the state suddenly ran dry. Trains soon stopped running as the supply of British coal stalled. With bellies rumbling and the centenary of Ireland’s Great Hunger approaching, there were reports of the Phoenix Park deer and even Dublin zoo animals going missing. Dublin prostitutes asked for payment not in cash but in sought-after commodities like soap or tea. As wheat production waned and the state desperately introduced the 100 percent black loaf, which used ground bone or lime lime powder to supplement the flour, and in turn inhibited calcium absorption, leading to a massive increase in childhood rickets. It was claimed in the Dáil that “the poor are like hunted rats looking for bread.” To top it all, German bombs rained down, Dublin Castle was ravaged by fire and, most ominously, Ireland suffered a serious Hoof and Mouth outbreak causing thousands of animals to have to be slaughtered. 1941 truly was Ireland’s wartime ‘annus horribilis.’

With the Irish economic situation aggravated by a booming black market and the belated introduction of full rationing, the situation darkened. Famine soon became a realistic fear. Twenty million people died of starvation globally during the Second World War. It was the increased incidence of hunger and mention of the dreaded ‘F-word’ which prompted the Irish government to take decisive action to preserve its very existence. 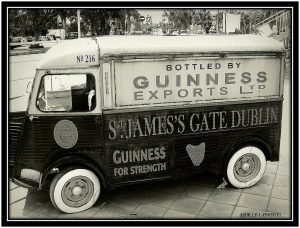 But how could tiny Éire – possessing scant natural resources, rapidly regressing to a medieval horse-and-cart economy, and described by another titan of Irish literature, George Bernard Shaw, as “a powerless little cabbage garden” – hope to sustain itself against Churchillian pressure? A clue lay in the communiqués back to London from the Dublin-based British press attaché and future British poet laureate John Betjeman. In these letters, Betjeman regularly spelled out the Irish supply situation. A typical report ran “No coal. No petrol. No gas. No electric. No paraffin” but conceded “Guinness good.”

Guinness, therefore, was the one economic weapon which the Irish possessed.

In March 1942, in an effort to preserve wheat supplies for bread for the poor, the Irish government imposed restrictions on the malting of barley and banned the export of beer altogether. The British attitude, hitherto devil-may-care, shifted dramatically. After the British army complained to Whitehall of unrest caused by a sudden and “acute” beer shortage in Belfast, a hasty agreement was drawn up between senior British and Irish civil servants. Britain would exchange badly needed stocks of wheat in exchange for Guinness.

A short time later, though, Guinness complained that they did not have sufficient coal to produce enough beer for both the home and export markets. The Irish government promptly re-imposed the export ban. This time, in a further attempt to slake the thirst of Allied troops north of the border, British officials agreed to release more coal to Ireland.

Slowly but surely, this pattern of barter repeated itself. Faced with a ballooning and dry-tongued garrison of American and British troops in Northern Ireland in the long run-up to D-Day in June 1944, the British periodically agreed to release stocks of wheat, coal, fertilisers and agricultural machinery in exchange for Guinness. These supplies were to keep neutral Ireland afloat during the Second World War and enable the continuance of Irish neutrality.