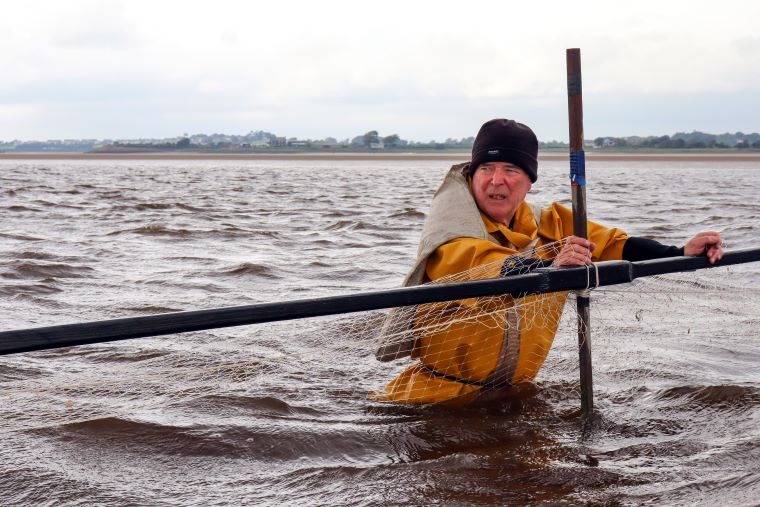 One thing that is shared by all the modern Celtic nations is a relationship with the sea. In times past the sea was the easiest – and sometimes the only – highway to other lands and it afforded opportunities to explore, communicate, share and trade. Each land developed its own unique links with the ocean that, in turn, shaped its identity.

From the legends and myths of antiquity to the songs, poems and prose that permeate each nation’s history, art and culture the omnipresent pull of the sea can be found. Boat design was tailored to suit specific coastal conditions giving rise to vessels such as the Irish currach, the Galician dorna and the Manx nobby. Likewise, fishing methods evolved around different shoreline environments. Some of these methods were brought by foreign invaders centuries ago and assimilated into the Celtic landscape where they can still be found in localized regions to this day. The ancient skill of haaf netting is one such example.

Practiced in the inner reaches of the Solway Firth, the art of haaf netting was brought to Scottish shores by the Vikings over a thousand years ago and is kept alive to this day by a small but dwindling group of enthusiasts. Haaf is an Old Norse word meaning channel or sea. Today, the term describes the wooden frame that is used to support a large net. It is comprised of a 16-foot-long crossbeam which, according to folklore, is the length of a Viking longboat oar. At each end is affixed a 5-foot-tall vertical post – known as an end-stick – and in the center a 6½-foot mid-stick. The net is then tied to this frame with enough slack to form a pocket on either side of the mid-stick into which fish will swim. It is a difficult and dangerous method of fishing that requires the fisher to wade into a deep channel of tidal water and hold the haaf net against the current. Once positioned the haafnetter can rest one or both hands on the beam with fingers grasping the top of the net so that the pull of a fish swimming into the trap can be felt. The entire frame can then be lifted and the fish either gathered in the net and dispatched or flipped over the beam and quickly released without handling. 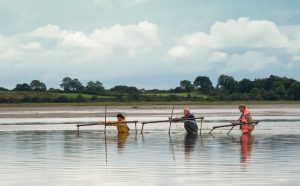 Haafnetters can choose to work alone or in teams. When working in teams they position their haafs end-to-end forming a line or ‘back’ of haafnetters that can cover a wider stretch of the channel. With this arrangement the chances of catching fish may be increased, but depending on the depth and flow of the water and the run of the fish a haafnetter may have a more-or-less advantageous position or ‘haul’ within the line. In the interests of fairness a draw is held on the shore before heading into the water. This is a complicated procedure known as ‘casting the mells’ and determines each haafnetter’s position within the line. Working as part of a team also lessens the risk when working in difficult conditions. The Solway has the second fastest bore of any estuary in the U.K. – the fastest being the Severn. Each tide shifts thousands of tons of sand and the positions of channels are always changing.  Over the years animals and people have had to be rescued from quick-sands on these shores and, sadly, a few have been lost. Haafnetters use the wooden frame to continuously prod the sand on which they are standing for it can move around their feet, opening up new holes and soft spots while they fish.

Although haaf netting can be used to catch sea bass, grey mullet, flounders, plaice and sea trout, it is salmon that is the prized quarry. As with most fishing methods, haaf netting wasn’t developed for sport but as a means to provide essential food. Once in plentiful supply, salmon was an important source of nutrition for coastal communities. As such, permission to fish was granted by kings in exchange for loyalty to the crown. In the case of the Royal Burgh of Annan on the Scottish side of the Solway Firth, it is known that haaf netting was a recognized way of fishing during the middle ages. Referencing an earlier Royal Charter lost during the wars with the English, King James VI of Scotland (James I of England) reaffirmed Annan’s Royal Burgh status in 1612 and, specifically, the ongoing fishing rights of the townsfolk including a reference to the use of haaf nets. There are many other references to haaf nets over the subsequent centuries, all indicating that this unique method of fishing has been in continuous use in the inner reaches of the Solway since the time of the Vikings to the present day.

Historically, haaf netting wasn’t the only method of fishing on the Solway. Stake nets and poke nets – known as ‘fixed engines’ – were also employed. These involved lines of posts – timber for stake nets and metal for poke nets – driven into the sand between which nets were stretched. Today, haaf netting is the only method still in use on the Solway.

Salmon numbers in Scotland have been declining for many years. This once abundant fish is already all but absent from southern European rivers. There appears to be no single cause for this collapse in numbers and it is likely that a combination of many factors is involved: parasites and pollution around fish farms that migrating wild salmon have to pass, climate change, habitat destruction associated with deforestation, fertilizers and pollutants from agricultural operations and increasing numbers of natural predators. In an 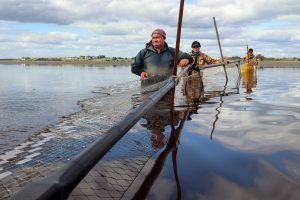 effort to combat the dwindling numbers, the killing of salmon has been banned on many Scottish rivers. In 2016, the Scottish government introduced The Conservation of Salmon (Scotland) Regulations prohibiting the retention of any salmon caught in coastal waters. This resulted in the overnight demise of ‘fixed engine’ methods of fishing. Now, the Solway shoreline is littered with decaying timber posts and rusting metal poles from the era of stake and poke nets. They serve as a reminder of the days when fishing was an essential part of coastal living. When the 2016 regulations came into force, the haafnetters on the Scottish side of the Solway were granted an exemption for three years on the understanding that only three salmon per fisher could be taken in any season. They also had to agree to participate in a scientific study whereby samples would be taken from all fish caught before the fish were returned to the haafnetters. The three-year study period ended in 2018 and there are no longer exemptions for haafnetters. Anyone choosing to continue haaf netting for salmon in the Solway now must practice catch and release.

Tony Turner is a haafnetter from the Royal Burgh of Annan and has witnessed the decline of haaf netting.

“I can recall the days when we had 46 haafnetters in the Burgh and I watched that fall to 30 and now there are only 15 active haafnetters left,” he shares. “There are no youngsters following in our footsteps. Unless we can take the occasional salmon home it isn’t worth the effort, expense and risk that is involved and that in turn will result in the end of part of our heritage that dates back over a thousand years.”

Last year, I took the opportunity to follow a group of haafnetters across the Solway sands to fish the channel a mile or so offshore. It was not something I would have contemplated without expert local knowledge. It was a beautiful summer evening but being so far from land made me aware of the exposed and isolated environment that these fishers operate in. As I watched them standing chest deep in the water I thought of the Vikings, the haafnetters of the Middle Ages and the centuries of tradition and skills now retained only by a few individuals. As the sun set, I realized I was witnessing the tide ebbing on a thousand years of history. ~ Story by Tom Langlands