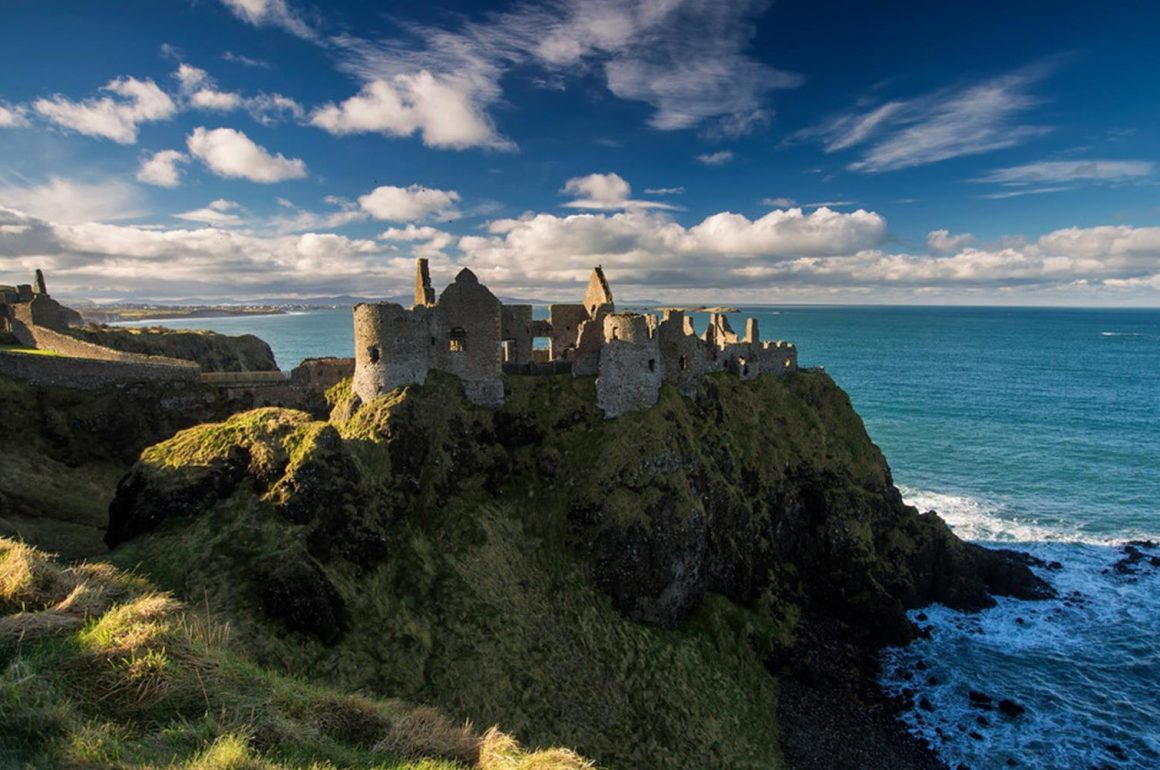 Classic and contemporary at once, the Emerald Isle is rich and robust in history. Here are our top-ten heritage sites in Ireland.

Dunluce Castle
It’s easy to see why Dunluce Castle in Northern Ireland was such an easily defended stronghold—it crowns a high, rocky crag jutting out into the sea reached by a bridge (formerly a drawbridge) over a ravine. Dating back to the 13th century, for a time it was the seat of the Clan MacDonnell. Walk through the arched gate with defensive tower to the atmospheric inner courtyard, where you can explore the ruins and take in the far-reaching views of the cliff-lined Antrim Coast. La Girona, part of the Spanish Armada, wrecked in 1588 nearby, and some of its recovered canons allegedly were installed at the castle. The Earl of Antrim built a lavish residence within its walls, but the kitchens supposedly collapsed into the sea in 1639, taking the staff with it. Impoverished after the 1690 Battle of the Boyne—when he backed the losing side—the Earl abandoned Dunluce and moved to another property. The castle is now a highlight of the 33-mile Causeway Coast Way walking trail.

Knowth
Not only did the Neolithic inhabitants of the Boyne River Valley build monumental ceremonial sites, they decorated them with spirals, crescents, and geometric designs. Knowth, built around 3,200 B.C, is said to contain more prehistoric art than any other site in Ireland—the 200-plus decorated stones found in excavations represent a third of all decorated stones found in Western Europe. The circular base of the Great Mound passage tomb is inset with over 120 massive, decorated stones capped with a grassy mushroom-shaped mound. Surrounded by over a dozen smaller, grass-covered mounds, the odd, lumpy landscape seems somehow organic. Knowth rivals Newgrange, acclaimed for its winter solstice alignment when the rising sun illuminates the inner chamber, but its interior passages aren’t open to the public. Knowth also isn’t as crowded. Access to both sites is by guided tour only through the Brú na Bóinne Visitor Centre.

Skellig Michael
Built on a steep-sided, double-peaked rock seven miles off the coast of County Kerry, the monastery on Skellig Michael illustrates the extremes of early Christian devotion and discipline. Monks occupied the island from possibly the 6th century through the 13th century, building narrow stone terraces some 500 feet above the sea for their beehive huts, oratories, and gardens, with channels and cisterns to capture rainwater. The extensive stonework, including several sets of near-vertical stairs, served penitential and practical purposes. On the South Peak, a devotional route required monks to rock climb in order to visit a series of prayer stations on ledges before reaching their destination—a tall, cross-inscribed stone on a rock spit about 700 feet above the sea, reached by a death-defying walk for absolution. It’s no wonder that Skellig Michael is a UNESCO World Heritage site. It’s also a bird-watching destination due to a large puffin colony. To this day it’s not easy to get to Skellig Michael as boats can only land when the seas are calm. Boats run from Ballinskelligs and Portmagee; there’s a visitor center on Valentia Island. 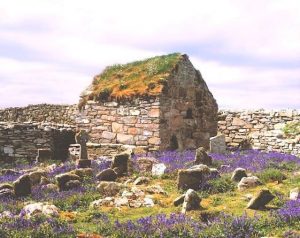 Inishmurray
This small, now uninhabited island four miles off the Sligo coast has one of the most intact early Christian monastic settlements in Europe. Its establishment in the sixth century is attributed to St. Molaise and it features stone churches and a beehive hut enclosed in a circular dry-stone wall reaching up to 15 feet high in places. There are 16 station turas, or pilgrim circuit, that mixes pagan and Christian religious traditions. A set of special inscribed round stones were used in rituals to bless someone, or in a dual role, to curse an enemy. Some locals credit Hitler’s demise to the curse put on him here during World War II. There’s also an ancient stone fort and cross-inscribed standing slab stones. In the 1800s, the island was renowned for its poitín, illicit whiskey, since islanders could spot approaching authorities well in advance to hide their distillation equipment. Boat trips are available to Inishmurray from Mullaghmore and Rosses Point.

The National Museum of Ireland—Archaeology
This remarkable Dublin museum presents Ireland’s ancient treasures and artifacts, and with 9,000 years of human inhabitation, there are rich objects and archaeological discoveries on display. Most impressive is the prehistoric gold collection, the largest and finest native-origin gold exhibit in any national museum in Europe outside of Athens. Included are lunula neck ornaments, sheet gold sun disks and collars, twisted arm bands, ear-spools, and clothing fasteners dating from 2200 to 500 B.C. Deposited in bogs during the Bronze Age, peat-cutters have discovered most of these treasures. The early Christian relics are of world importance, including the Ardagh Chalice, Cross of Cong, Lismore Crozier, and a bell that reputedly belonged to St. Patrick. The finds from Dublin’s Wood Quay, the most intact Viking urban center ever excavated in Western Europe, reveal town layout and everyday life from the year 1000 and before, as well as widespread commercial connections. The museum features a large collection of weaponry; an early illuminated Book of Psalms recently found in a bog; and well-preserved bog bodies that were likely Iron Age and earlier tribal sacrifices. Admission to the archaeology museum on Kildare Street is free.

Carrowmore and Knocknarea
The largest megalithic cemetery in Ireland is Carrowmore in County Sligo with about 30 visible passage tombs scattered in the fields. They’re primarily dolmen circles, a type of tomb with a large capstone balanced on upright stones to create the burial chamber, surrounded by a boulder circle. Most of the tombs were built between 4,000 and 3,500 B.C., centuries earlier than Newgrange and Knowth, although radiocarbon assays from one tomb suggest a date of 5,400 B.C. Guides point out features and alignments with ancient monuments in all directions, including the massive rock cairn topping nearby Knocknarea. Measuring nearly 200 feet in diameter and over 30 feet high, it is the largest unexcavated cairn in the country, and thought to cover a passage tomb dating to about 3,200 B.C. Legends say Queen Maeve, the warrior queen of Connacht, was buried in the cairn standing up in full battle gear facing her enemies in Ulster. It’s an easy hike to the top of Knocknarea, where you can see additional megalithic sites and distant views on a clear day.

Kilmainham Gaol
This fascinating Dublin prison reveals the heartbreaking courage of the men and women who resisted English rule and helped forge an independent nation. Opened in 1796, Kilmainham Gaol played a part in every act of rebellion over the following 128 years—many of the Irish leaders right up through the Irish War of Independence (1919–1921) were imprisoned here. The firing squad executions of 14 leaders of the 1916 Easter Rising in the prison yard were a turning point, creating an outcry and support for nationalism. The colorful guided tour tells the tales of many prisoners, like Joseph Plunkett, who married his sweetheart in the jail chapel just before he faced the firing squad, and James Connolly, who couldn’t stand up due to his wounds so he was tied to a chair for his execution. The grim, gray building is one of the largest unoccupied prisons in Europe and presents the rough conditions as they were. In recent years it has had roles as a movie backdrop in films such as Michael Collins (1996) and In the Name of the Father (1993). 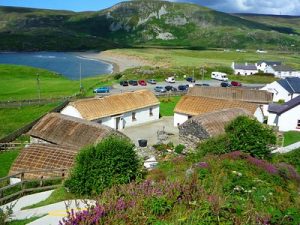 Glencolmcille
This remote village in County Donegal is home to numerous megalithic tombs and early Christian sites, as well as the Folk Village Museumdepicting furnished thatched cottages from different eras. The best way to learn about the 5,000 years of history here is to attend the weeklong archaeology school offered in August by Oideas Gael and led by eminent archaeologist Michael Herity. There are impressive portal dolmens with massive balanced capstones; two monumental court tombs (Cloghanmore and Farranmacbride) dating to approximately 3,000 B.C. with corbelled-roof inner burial chambers and an open-air court surrounded by colossal rock cairns; and 1,000 B.C. promontory forts on coastal headlands. St. Colmcille (known as St. Columba in Scotland) likely lived here in the mid-500s before going on to establish Iona. There is a 15-station turas or Christian pilgrim route around the valley that is still performed on his feast day, June 9, nearly 1,500 years later; in the past it was done at midnight barefoot. It incorporates pagan elements and Celtic art, with a holy well, wishing chair, prayer stones that are passed around the body, and fine carved cross slabs.

Céide Fields
Hidden beneath the blanket bogs of north County Mayo is the most extensive Stone Age site in the world—Céide Fields, on the tentative list for World Heritage List inclusion. The four-and-a-half square mile area is a unique Neolithic landscape of stonewalled farm fields, the remains of dwellings, and burial monuments constructed about 5,700 years ago. Archaeologist Seamus Caulfield mapped the pattern of walls with iron probes traditionally used to locate ancient trees under the peat, and found the remains of structures and tombs from this early farming society. The whole story is laid out in the Céide Fields Interpretive Centre, an award-winning pyramid-shaped building topped with a glassed viewing area that showcases the dramatic scenery of the fields and coastline. On the guided tour take a probe to tap a stone wall untouched by human hands for many millennia. Nearby is the slender, nearly 20-foot-tall Doonfeeny standing stone, the second highest in Ireland, a fifth-century monument that was later Christianized with two carved crosses.

Derry
Northern Ireland’s Derry (officially Londonderry) is the best-preserved walled town on the island of Ireland and is one of the finest examples of a walled city in Europe. Completed in 1618, the walls are up to 26 feet high and 35 feet thick in spots with watchtowers and cannons. A one-mile guided tour atop the walls tells the early history of the city, as well as the later violence during “the Troubles,” which are widely regarded as getting their start in Derry in the late 1960s. You can see down into the Bogside, a Catholic neighborhood where a mural proclaims, “You are now entering Free Derry.” For a more in-depth perspective, take a walking tour of the murals along Rossville Street known as the People’s Gallery with the Bogside artists who started painting them as witness to the events that happened here, like the 1969 Battle of the Bogside and 1972’s Bloody Sunday. Now the murals also feature symbols of peace and world human rights activists. Don’t miss the Museum of Free Derry, which chronicles the civil rights struggles, or the Tower Museum, which presents both sides of the story. The Tower Museum also features artifacts from a Spanish Armada ship that wrecked in 1588 off the north coast, and excellent city views from the open-air viewing platform.