History of the Claddagh Ring 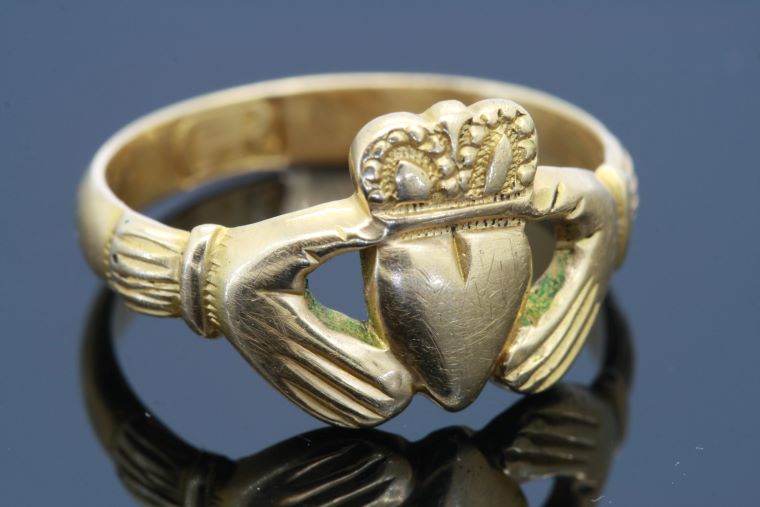 The famous Claddagh Ring is much more than a beautiful piece of jewelry. Many Celtic traditions have a story to tell. In the case of the Claddagh Ring, there is not one but many stories told. Symbolism has long played an important role in Irish heritage and culture, and symbolism lies at the heart of the Claddagh Ring.

According to Claddaghrings.com these rings has long been associated with romance, fidelity and Irish culture. Think of the Claddagh Ring and romance springs to mind. A girl meets a boy and falls in love. Claddagh Rings are exchanged, symbolic of the fidelity and mutual affection between the two lovers.

The tradition behind the ring signifies love and friendship. The hands on the ring are believed to represent friendship, the crown loyalty, and the heart love.

The Claddagh Ring is thought to have meanings other than romance. There are religious connotations: the heart representing God, the hands symbolic for Jesus Christ and the Holy Ghost.

The Claddagh Ring is believed to date back centuries. Its origins are most widely credited to the 17th century and to a young Irishman named Richard Joyce, a native of Claddagh, a tiny fishing village on the coast of Galway.

It is a romantic tale. On a ship bound for the West Indies plantations, Joyce and his fellow shipmates were captured by Algerian pirates and ferried to the African country. Joyce was sold to a Moorish goldsmith, who trained the young Irishman in the craft.

In 1689, an amnesty was declared. Won over by the young Irishman’s charm and craftsmanship, his Moorish master offered Joyce half his wealth and the hand of his only daughter in marriage. But Joyce’s heart belonged in Ireland.

On returning to his native Claddagh, Richard gave a ring to his sweetheart. They married and Joyce set up a goldsmith shop from where the first Claddagh Rings, bearing his inscription RI (the initial letters of Richard), were produced.

But like many other elements of Irish culture and heritage, the precise source of the Claddagh Ring is in dispute. Another story tells of a Margaret Joyce (no relation to Richard), who married a wealthy Spanish merchant by the name of Domingo de Rona. The Spanish husband died, bequeathing the Irish woman a large fortune. Joyce put the new riches to good work, doing many charitable works and building bridges in the western counties. She was supposedly rewarded for her kindness when an eagle dropped the original Claddagh Ring into her lap.

Claddagh is also believed to be one of the oldest fishing villages in Ireland. For centuries, fishermen from the area took to sea with the Claddagh crest on their ships and sails. The crest was used for indentification purposes when fishermen from outside the area fishing in their waters were chased away or killed. 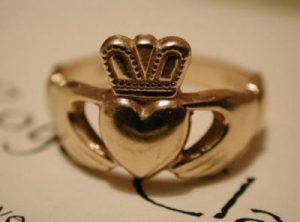 Another mythical tale is told of an ancient king who became besotted with a peasant girl. Class distinctions stood between the two and the king’s love went unrequited and unfulfilled. In the depths of depression, the king took his own life. His dying wish was for his hands to be chopped off and placed around his heart as a symbol of his undying love and affection for the true love.

Far from being of exclusively Gaelic or Celtic origins, the Claddagh also draws on inspiration from Europe. The similarities between the Claddagh Ring and a popular group of finger rings called Faith Rings – or Fede – has been noted. Fede rings date back from Roman times and were popular in Europe in Medieval times these rings also took the form of two clasped hands, symbolizing faith, trust or brotherhood.

Whichever tale you choose to believe, there is no doubting that the Claddagh Ring is as popular today as it ever was. Ironically, the mass exodus from Connemara during the Great Famine 1845-49 to North America contributed to its enduring legacy. Kept as heirlooms and passed on from generation to generation, the Claddagh Ring gain currency in the USA and Canada in the late 19th century.

Nearer home, the Claddagh Ring was the only ring made in Ireland ever worn by Queen Victoria. Later King Edward VII and Queen Alexandra would each wear one. In 1962, Prince Rainier and Princess Grace of Monaco were presented with gifts emblazoned with the Claddagh Ring motif set in Connemara marble.

The Claddagh Ring as both a concept and a practical way of displaying love, loyalty, affection and identity has survived a proud Irish symbol sitting comfortably in the 21st century.