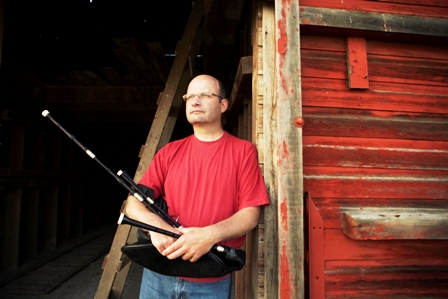 Iain MacDonald was inspired to begin piping by his mother. Originally, she had wanted to play as a child herself, but at that time the Regina Pipe Band wouldn’t allow girls to learn the instrument.

“So I got hauled down instead,” MacDonald recalls with a smile, “and I just loved it right from the start.”

He must have, as even with 50 years of piping under his belt, the Saskatchewan native shows no signs of slowing down. He notes that his City of Regina Pipe Band’s season is already well underway, with shows booked at Highland games in three Canadian provinces. As well, the Conservatory of Performing Arts Pipe Band – a youth band MacDonald teaches – is scheduled to hit the road this summer. To make things even busier, the band leader is also organizing a piping summer camp in Regina, where he still resides.

With such a lengthy career, MacDonald is bound to have a few good memories. Among them, he counts sharing the stage with both Sir Paul McCartney and The Chieftains as highlights, but equally important are the many smaller gigs performed alongside numerous pipe and folk bands. He cites several other memorable experiences also, including living in Glasgow, gigging in the Babcock-Renfrew Band and, over the years, playing solos at games in Scotland and North America.

“The really outstanding highlight for me, over all this time, is being able to play in the bands with my wife, Barbara – who is an excellent piper,” he declares with pride, “and then with our children, Eilidh, Ruaridh and Duncan.”

MacDonald says that one of the benefits of enjoying a long career is having the good fortune to meet and work with so many great pipers. He reminisces about learning a great deal at summer schools during his time in Scotland in the late 1970s and early ’80s.

MacDonald plays a set of David Atherton pipes, as well as reel pipes made by Fred Morrison, and Uilleann pipes made by the late Chris Langan of Toronto.

But when asked if he’s a traditional piper in terms of style and sound, he hedges his bets, calling “traditional” a loaded term these days.

“What is traditional?” he questions. “Lots would argue the standard tunes and styles that many of us grew up with are not actually traditional, but a military style reflecting non-traditional perspectives on Gaelic culture. I’d say that the last 30 years have broadened the stylistic choices for pipers and I personally am happy to play different ways to suit occasions or formats.”

Are kids still as interested in piping, as he once was fifty years ago? MacDonald considers the question, pointing out that people’s daily lives have changed greatly since he took up piping, and that today’s children have a lot of things competing for their attention.

“Most families have both parents working away from the home. Kids are scheduled into activities after school and evenings, and large-screen TVs and the ever-present mobile devices are a constant call. Despite this, when piping is fun, challenging and rewarding, kids will respond like they always have. It’s harder than ever to get kids to commit to regular practice and to develop real skill and passion, but it can be done.”

To ensure youngsters remain engaged, he recommends involving them in piping groups and bands at an early age, and making certain that the experience is both fun and social. “One thing we could all be doing better is communicating with a wider public audience about what piping offers, and work to have it recognized as a serious instrument.”

As for himself, MacDonald continues to play because he loves the music and everything to do with piping.

“There are still a lot of tunes to learn and they all need to be better, so there’s no reason to stop just yet. I enjoy playing pipes solo, and I also play and teach in bands, so there’s always a reason to keep going.”