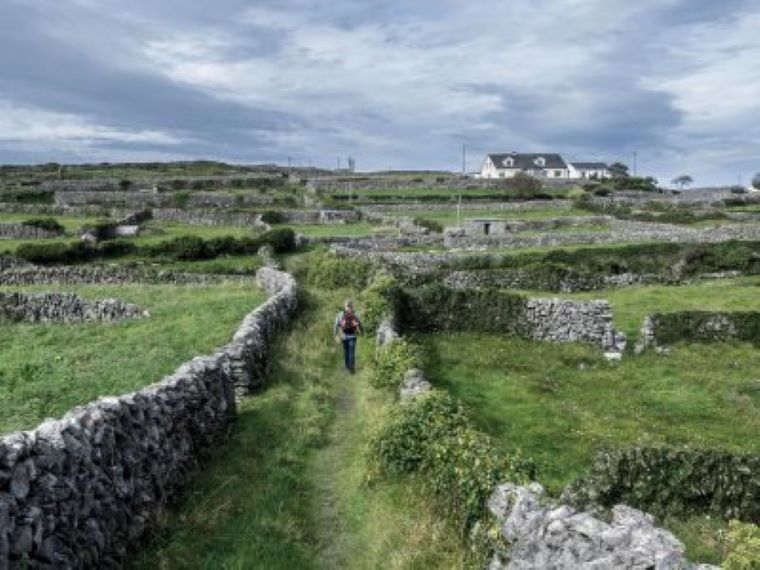 Near the mouth of Galway Bay, off the west coast of Ireland, sit the ruggedly beautiful Aran Islands: Inishmore (the “big Island”), Inishmaan (the “middle island”) and Inisheer (the “east island”). This trio—where Gaelic is still spoken—is seemingly a place time forgot. But, the islands, home to about 1,200 people, are filled with fascinating archaeological remains and maintain strong traditions that lure visitors from far and wide. Here’s what you need to know about these idyllic islands. 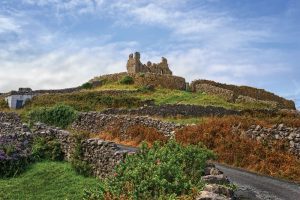 The monk St. Enda chose this lonely island battered by the Atlantic Ocean to establish a monastery in the 5th century. His thinking: reaching Inishmore was such a hardship in itself, the journey qualified as a form of penance. That very isolation has preserved the traditional way of life on Inishmore, which, at 762 people, is the most populous of the three tiny islands.

Gaelic is widely spoken; it’s the language you’ll hear in the handful of pubs and shops in the main harbour village of Kilronan, where passenger-only ferries let off visitors daily. Tours of the island—by foot, minibus, bike or pony-and-trap—reveal ruddy-faced farmers tending rock-enclosed potato fields, white-painted cottages, foraged seaweed drying on rocks, fishermen rowing their traditional currachs (a type of wooden boat) in the ocean, and docile cows grazing in pastures next to ancient ruins.

Prehistoric sites are plentiful on Inishmore. Chief among them is the massive, Bronze and Iron Age fort of Dun Aengus, which sits at the very top of a 100-metre cliff, looking down on the thrashing Atlantic Ocean. Thrill-seekers are drawn to The Worm Hole; this large, naturally formed rectangular pool, carved out of the limestone by the fury of the pounding waves, has been the site of the Red Bull Cliff Diving competition for several years.

Connecting with islanders is easy. Turn off Google Search and track down Thomas Faherty at the Seacrest B&B, where his wife, Geraldine, serves a proper Irish breakfast of white pudding, hash browns and homemade brown bread, and settle in for a personalized pony-and-trap tour of the island—ask Faherty to stop near Kilmurvey Beach to visit the resident seal colony. For supper and live music, head to Joe Watty’s Bar for locally caught fish, mussels and crab. End the evening with an Irish whiskey at The Bar down by the pier in Kilronan.

Where to stay: There are plenty of B&Bs on the island, plus the 12-room Pier Houseand 22-room Aran Islands Hotel, located within walking distance of the pier in Kilronan. 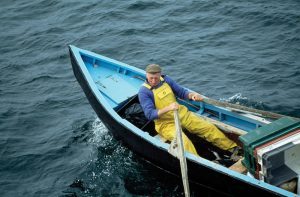 Caomhán, also known as Kevin, is the patron saint of Inisheer and reportedly arrived on the island—a landscape of weathered limestone with plenty of sink holes and small caves—in the 6th century. Teampall Chaomhán, the medieval church ruin that bears his name, is half-underground, requiring caretakers to regularly clear away the beach sand that threatens to bury the entrance.

Memorable characters can also be found among today’s 280 or so islanders who share six family names between them. The Flaherty clan has been running the main hotel, Óstán Inis Oírr, for almost 40 years. The O’Conghaile family operates High Ruairí (Rory’s) on Baile An Lurgain road. The pub’s namesake, Rory O’Conghaile, was among those who rescued sailors (and later the cargo) from the shipwrecked Plassey in 1960—it’s rumoured this is how the first modern toilet appeared on Inisheer. The rusty hulk of the steam trawler is now a tourist site on the most easterly point of the island.

The best way to discover tiny Inisheer—it’s only about five square kilometres—is by foot. Devote a morning or afternoon to the Inis Oírr Walk Way Trail. It starts at the Bronze Age burial mound of Cnoc Raithní before continuing to the Iron Age fort of Dún Formna, the ruins of the 14th-century O’Brien’s Castle and the holy well of Tobar Éinne (dedicated to Inishmore’s St. Enda). 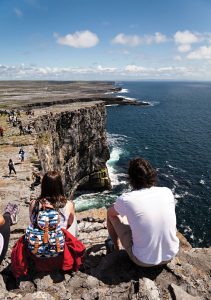 Irish playwright John Millington Synge was seduced by the landscape of Inishmaan in the late 1800s: a jagged coastline of cliffs and sandy beaches, rolling hills and farmers’ fields crisscrossed with a latticework of stone walls. Oh, and the blessed quiet. His restored cottage, Teach Synge, is located in the middle of the island and there’s also a stone structure atop the limestone cliffs called Cathaoir Synge (Synge’s Chair), where the writer would while away the hours.

Today, Inishmaan (population: 183) is a one-pub island and the least-visited of the Arans. The five-room Inis Meáin Restaurant & Suites, an award-winning retreat house and restaurant, was opened in 2007. Down the road is the Inis Meáin Knitting Company, where locals make (and sell) hand-crafted knitwear.

The handful of ruins on Inishmaan include a clochán (a beehive-shaped stone building from the early Christian period) and vestiges of the 8th-century Cill Cheannannach church. A pair of Iron Age ring forts, Dún Conchúir and Dún Fearbhaigh, can be visited while walking the 13-kilometre Lúb Dún Fearbhaí trail—just follow the white and purple arrows. Rough weather is the optimal time to witness the Puffing Holes along the clifftops; the force of the ocean sends seaspray bursting up through tunnel-like channels in the cliffs.