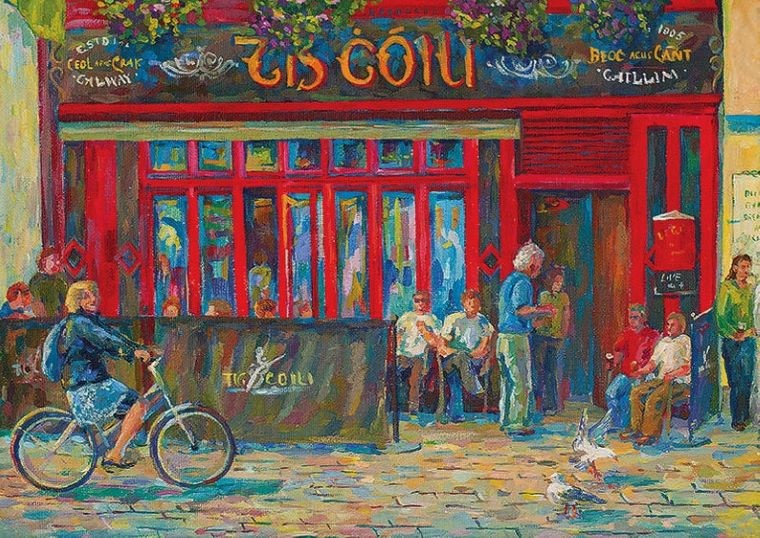 In many places around the world, Irish pubs are the hub and heart of the community. Below are some weird and wonderful facts about the home of the craic!

Under Brehon Law – first codified in the sixth and seventh centuries – each local king was required to have his own bruigu (also sometimes spelled brughaid), or brewer. A bruigu was obliged to have “a never-dry cauldron, a dwelling on a public road and a welcome to every face.” He had to provide hospitality to all comers in his bruidean (usually translated as “hostel”). The bruidean had to be located at a crossroads; have four doors, one on each of the approaching routes; have torch-bearing greeters on a lawn outside so nobody would pass by unwelcomed; and stay open 24 hours a day. There were strict rules on provisions: The bruigu had to stock three uncooked red meats, butchered and ready to cook; three stewed meats, cooked and kept heated; and three types of live animals, ready to slaughter at short notice. Three different cheering sounds had to be heard in the bruidean simultaneously: the cheers of the ale-makers going happily about their work, the cheers of the servers bringing alcohol from the cauldron, and the cheers of young men playing chess.

The oldest pub and the oldest graffiti in Ireland.

After a dispute had rumbled on for many years, the owners of Sean’s Bar in Athlone, Co Westmeath, and The Brazen Head in Dublin agreed to go on national radio to decide which of their establishments should be recognised as the oldest pub in Ireland. The late DJ Gerry Ryan hosted the debate. The owner of Sean’s Bar provided evidence – verified by archaeologists and historians from the National Museum – that strongly suggested the presence of a retail premises on the site dating back to AD900. During renovations in 1970, the walls, part of which are now on display at the National Museum, were found to be made of wattle and daub. The builders also found coins dating from the period, minted by local landlords and probably used as beer tokens. The owners highlighted written evidence of a rest stop for pilgrims on their way to nearby Clonmacnoise. The Brazen Head had no answers and graciously admitted defeat. They may have taken some small consolation when a signature etched on one of their windows was confirmed to be from 1726 and was awarded the title of the oldest piece of graffiti in the country. The writing – in a whorl on a bottle-glass pane – is so small it cannot be read with the naked eye, but with the aid of a magnifying glass it is possible to decipher the spidery writing: “John Langan halted here 7th August 1726”.

The Normans brought wine bars and the term “vintners” to Ireland.

The word tavern – originally from the Latin taberna, meaning hut – was first used when the Normans occupied parts of Ireland in the twelfth century. The Normans were wine lovers and imported the best wines from their homeland. At first, the alcohol was managed by wine merchants, or vintners, and delivered to the cellars of the castles of the Norman lords, who largely resided inside the Pale. Occasionally, they held wine-tasting events when new stock was imported, and over time began to sell the surplus at the point of storage. These taverns became meeting places for important members of society where alcohol and food were served and issues of the day discussed. Dublin’s Winetavern Street, referred to as vicus tabernariorum vini in Latin – “the street of the wine taverners’” – was the main centre of distribution and retail. In 1979, while excavating the controversial Wood Quay site nearby, archaeologists found over 2,000 pewter tavern tokens dumped in a refuse pit. 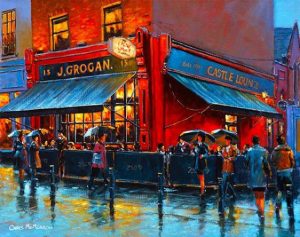 Pubs were once allowed to store dead bodies.

The Coroners Act of 1846 decreed a dead body had to be brought to the nearest public house for storage until further arrangements were made. The beer cellars were cool and slowed decomposition, and it became common for publicans to have marble tables in their cellars for autopsies. This legislation was not removed from the statute books until 1962, and the dual role of publican and undertaker is still common in Ireland. The Freeman’s Journal of April 9th, 1869, carried a story of a bus crash in Dublin. The injured were brought to Lawler’s pub to be treated, instead of to the nearby St Mary’s Asylum where nurses and doctors were in attendance. The editor complained the choice was inappropriate because the publican had no beds. Patrick Lawler saw fit to write to the paper to defend his actions: “I beg to say that the body of Mrs. Byrne was brought into my house by the direction of Dr Monks, and laid on the table of the taproom, where a large fire was burning. Blankets were at once brought down from the bed of my own family and wrapped round the body. Every possible effort was made to resuscitate her. My house was closed and business suspended while she remained there; everything required by the doctor and those in attendance were supplied by me.”

Why Irish pubs have family names over the doors.

It became a legal requirement to display the proprietor’s name over the front door of the premises after legislation passed in 1872. The legacy of this law is often cited as one of the unique features of the Irish pub. Often, a public house operates under a long-obsolete family name – a signature feature in the boom of “Irish pubs” outside Ireland. This change in legislation limited the previous inventive array of names: in Dublin, The Sots Hole in Essex Street, The Wandering Jew in Castle Street, Three Candlesticks in King Street, House of Blazes in Aston Quay, The Blue Leg in High Street, The Holy Lamb in Cornmarket and The Golden Sugar Loaf in Abbey Street are all long since defunct. Some pubs, such as The Bleeding Horse and The Brazen Head, kept both a family name and original title.

Travellers used to be legally entitled to a drink.

Bona fide houses utilised a legal loophole – a hangover from the days of coach travel – that allowed a genuine traveller three miles from his place of residence to partake of alcohol outside normal hours. If you lived in Dublin city, the limit extended to five miles from your habitual residence. According to the law, the customer had to have “travelled in good faith”, not for the purposes of taking refreshment; travellers could go into an inn for “refreshment in the course of a journey, whether of business or pleasure”. It was a legally fraught area. In order to prove a public house was taking advantage of it, the court had to prove the publican did not believe his customer was a bona fide traveller when serving outside normal hours. Famous Dublin bona fides included Lamb Doyle’s in the foothills of the Dublin Mountains, Walsh’s Sandyford House – then known as the Widow Flavin’s – and the Dropping Well in Dartry. The law was finally changed in 1943. Bona fide travellers could no longer be served between midnight and 6am, and the pubs were eventually abolished in 1963. The widespread use of cars brought the curtains down on a unique phase of the Irish pub.

Leopold Bloom, the central character in James Joyce’s modernist masterpiece Ulysses, famously said it would be a good puzzle to walk across Dublin without passing a pub. The problem was only solved in 2011 by software developer Rory McCann, using a computer algorithm. There are fewer pubs now than on Bloomsday, June 16th, 1904. On his first attempt, McCann could not find a route that did not pass a hotel. He did, however, rule out restaurants with licences to serve alcohol. McCann’s route runs from Blackhorse Avenue to Baggot Street. It goes through Stoneybatter, past St James’s Gate – the home of Guinness – down Bride Street, across York Street, past St Stephen’s Green, detouring through the Iveagh Gardens, and down Adelaide Road. He modified this route in 2014 to avoid passing any hotels. Fittingly, it now crosses the James Joyce Bridge.

Cocktail bars are nothing new.

In 1932, The Irish Times denounced the cocktail, warning readers: “It is supposed by the many to induce an appetite and to stimulate intelligent conversation; in fact, it absorbs the pancreatic juices and encourages cheap wit.” At the annual meeting of the Irish Association for the Prevention of Intemperance in 1936, it was noted that “appalling revelations have been made in the press lately about cocktail and sherry parties even among business girls in their own apartments”. At the meeting, held in Bewley’s on Grafton Street in Dublin, calls were made for “the discontinuance of cocktails and the elimination of drinking clubs’, as well as ‘the elimination of drinking at public dances”. Later in 1937, The Irish Times reported the belief of a doctor from Clare Mental Hospital that “now that women have taken with avidity to tobacco and cocktails, one can visualise the most appalling results for the human race at a not far distant date”.

St Patrick’s Day, falling as it does in the middle of Lent, was once a day of abstinence. The only place alcohol was sold was in the members’ lounge at the Royal Dublin Dog Show. High attendance figures were guaranteed. Patrick Kavanagh reputedly once rented a dog to get in, while his arch-nemesis Brendan Behan stole a poodle on another occasion. The law did not change until 1973. The celebrations now associated with the national holiday were born in the United States. The first parade took place in 1762, when Irish soldiers serving in the British Army marched through Manhattan to a tavern. It was 1931 before a parade took place in Ireland. There was a major change in 1995 when the Government introduced the St Patrick’s Day festival. According to Diageo, St Patrick’s Day now sees over 13 million pints of Guinness being sold around the world – nearly four times the amount sold on an average day.

There are strange things in Dublin pubs.

Some of Dublin’s hostelries harbour strange things. One such is The Clock on Thomas Street, which has an aviary in the beer garden. In Toner’s pub of Baggot Street, the beer garden utilises predator bird noises to keep away seagulls. It goes off every 18 minutes or so. In Fallon’s in The Coombe, there is a photo of a couple on their wedding day on the ceiling. A local punter given to excessive drinking sometimes fell from his chair. He would see his wife looking down at him, feel suitably admonished, and make his way home. Billy Brooks Carter from Texas loved Mulligan’s of Poolbeg Street so much he requested some of his ashes be kept in the grandfather clock. Every eight days, the staff ‘wind up Billy’.