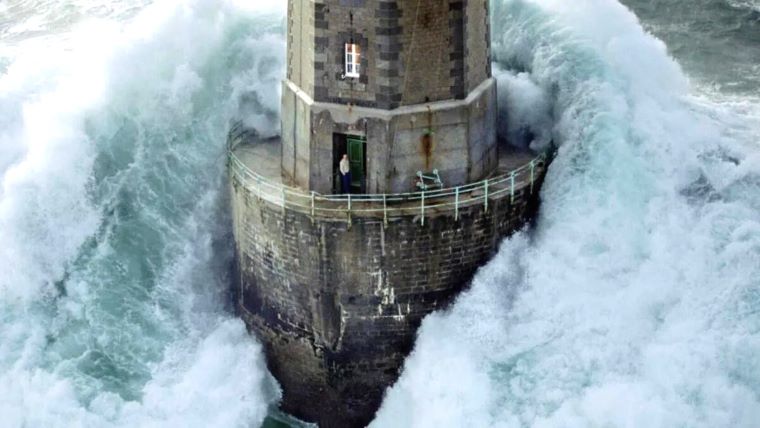 La Jument lies about 300m off the coast of the isle of Ushant, which is also known as Ouessant in French and Enez Eusa in the Breton language.

Poster prints of Breton lighthouse La Jument can be seen decorating the walls of over a million homes, offices and pubs around the world, but Bretagne’s treacherous reef has been known for centuries by sailors in the Celtic Sea.

Over the past century La Jument lighthouse has effectively increased maritime safety in the area, known to the Bretons as Mer d’Iroise of Iroise Sea. However, the waters off Bretagne’s west coast still remain one of the most dangerous seas in Europe with frequent violent storms, huge waves and strong currents. 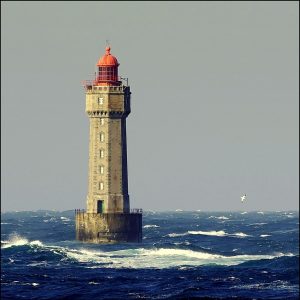 At that very moment, a giant wave rose over the rear of the lighthouse and Guichard took his world-famous shot as the wave smashed against the tower. Théodore Malgorn, suddenly realizing that a giant wave was about to engulf the structure, rushed back inside just in time to safe his life.

Jean Guichard’s 1989 dramatic storm photo shots became an instant hit and earned him the World Press Photo award. La Jument appeared on newspapers and magazines all around the world and Guichard went on to publish a bestselling book about lighthouses and a collection of poster prints.

Lighthouses in Brittany have been automated in the past decades and La Jument itself has no longer a keeper since 1991. For many years Jean Guichard’s quest was to portray Bretagne’s maritime heritage before automatization took over. Many of his photos are now considered to hold a historic value and his work is highly respected in Brittany.