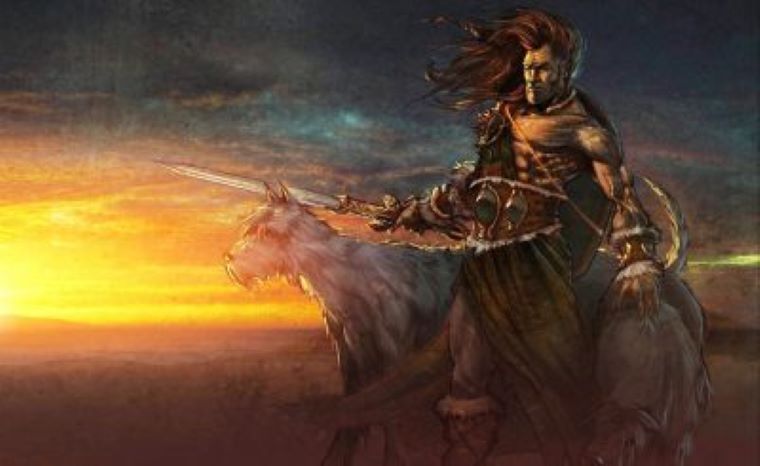 The magical Giant’s Causeway has astounded millions of tourists with its mystique and uniqueness, but long before it became easy or common for world travelers to journey to the Co. Antrim UNESCO World Heritage site, wonder has surrounded the story of its creation.

We know now the true, yet still amazing, reason for the Giant’s Causeway’s existence and how the 40,000 interlocking basalt columns perfectly shaped into hexagons were created through volcanic activity some 50 to 60 million years ago.

And yet, with the mystical atmosphere that hangs over the mighty Causeway, it almost seems that the myths and legends that have been told by storyteller after storyteller would make for more appropriate tales of creation.

Mac Cumhaill (otherwise known as Finn McCool) was a mythical hunter-warrior of Irish mythology associated with An Fhiannaíocht, or the Fenian cycle. In general, he is not considered to be a giant but in the case of the Causeway legends, he is almost always made out to be a giant, or at least of extraordinary height. 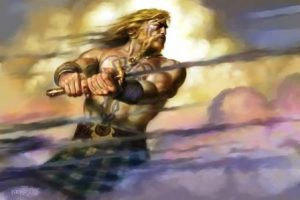 Because we share Fionn as a mythological being with our friends in Scotland, the Causeway is sometimes told to be a collection of stepping stones allowing him to travel at will between the two countries without getting his feet wet and many of the most popular versions of the tale do include a link to Scotland with thanks to the same pattern of hexagonal columns appearing across the sea in Staffa, a Scottish island, which can be seen from the Antrim Causeway.

A second version of the story claims Fionn was in love with a giant woman living on Staffa and the Causeway was built as an attempt to bring her back to Ireland.

The most popular story, however, revolves around a local rivalry and an excellent piece of deception.

A giant named Benandonner, otherwise known as the Red Man, was believed to roam Scotland. Mac Cumhaill and the Red Man did not see eye to eye and Fionn challenged his Scottish nemesis to a fight while they shouted and threatened each other from across the water.

Building the Causeway so he could reach his biggest enemy, Fionn moves rocks from Antrim into the sea, and completes his new pathway only to find that Benandonner is his biggest enemy in more than one way. Benandonner was, in fact, much larger than him. Instantly regretting his trash talk, Mac Cumhaill hopes to run back to Ireland and go unnoticed by the Scottish giant. Unfortunately for Fionn, it isn’t long until he is spotted and Benandonner gives chase to the Irish hero’s home in Fort-of-Allen in Co. Kildare.

As Fionn runs as fast as he can back to his homeland, he loses a boot and unfortunately there is no Cinderella story in this case, as the boot was to remain exactly where it was and is still visible at the Causeway today.

With the Scottish giant approaching, his stature is even more amplified as Fionn can feel him approaching the house from as far away as Kilcock and was forced to put moss in his ears to deafen out the sounds of the giant’s approaching footsteps as he got ever closer.

Having found himself in a tussle he wasn’t sure he could get out of alive, Fionn turns to his wife Oonagh who thankfully swoops in to save the day. Wrapping her husband in a sheet and telling him to settle himself into the bathtub, she welcomes Benandonner to her door, apologizing that Fionn is currently hunting deer in Co. Kerry. 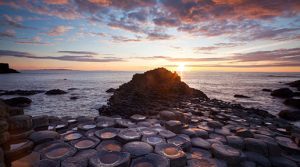 Taking the giant around her home, she points out various pieces of fighting paraphernalia that she claims are Fionn’s but in reality would be much too large and heavy for the smaller giant to carry.

Telling Benandonner she will make him Fionn’s favorite meal while he waits, Oonagh instead cooks a cake of griddle-bread baked with the iron griddle pressed inside it, on which the Red Man breaks three front teeth, and follows it with a strip of hard fat nailed to a block of red timber, on which the giant loses two further teeth.

With Benandonner beginning to feel he’s bitten off more than he can chew, Oonagh then asks if he would like to meet the baby and the Scot is astounded and terrified when he meets their “son” who is in fact just Fionn wrapped up in his sheet.

Assuming Fionn is enormous if this is just his child, the Red Man makes his excuses to Oonagh, and flees back across the Causeway, destroying it in his wake.

As the Red Giant left, Mac Cumhaill is believed to have plucked a chunk of earth from Antrim and flung if after him to completely scare him off from venturing back to Ireland again. The chunk of earth missed, however, but still remains in between the two countries as the Isle of Man. The area where Fionn had taken the earth from filled with water and is also said to have become Lough Derg, the largest lake in Ireland.

As with much folklore, this version of events is not always told the same way with some storytellers saying that Fionn was asleep in bed when Oonagh heard the Scottish giant coming and took it upon herself to hide him. Others say that the Causeway was never completed and the long-standing rivalry never came to a head as both giants fell asleep from the hard work involved just starting of the passageway between the two countries.

Perhaps the most gruesome version of the tale, however, tells that the “baby” Fionn bit off the magic middle finger of Benandonner, causing the giant to lose all his strength, and leave Ireland for good.