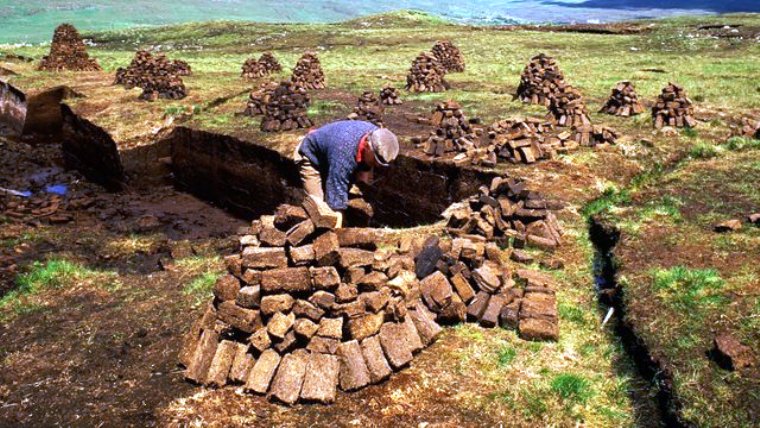 Many Irish emigrants say nothing reminds them of home more than the sweet smell of a turf fire, made with bricks of peat cut from the rich, black bogs that blanket the countryside. But turf-fueled memories may become just that, as Ireland’s bogs face big changes.

This past year in the bogs was a good one, with turf harvesters working long days in the unusually sunny weather to process the bricks, or sods, of peat that will warm them all winter. Many Irish families still rely on peat to heat their homes, or at least supplement fuel such as imported oil or coal.

Michael McCann, 85, of Co. Roscommon has been harvesting peat since he was old enough to turn the rough sods. Now, his children and their children do most of the harvesting and, instead of being loaded into woven creels carried by donkeys, a tractor and trailer hauls the load home.

Daughter Claire recalled when the 10 McCann children helped with the annual harvest.

“We’d all be lined up, turning the turf, or stacking it up two by two.  And there’d be such whinging and carrying on,” she laughed. Now, the youngest of her four children, Kate, three, is an eager helper as Claire shows her the time-honored method of stacking the rough sods of peat to dry. 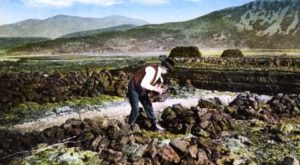 Most harvesters don’t own the plot of bog land they work; they have turbary rights, allowing them to cut turf on land others own, much like mineral rights. The custom started when large estates owned most Irish land, and the landlords allocated specific areas of a peat bog for the tenant farmers’ use.  After Irish independence in 1921 the Irish Land Commission took over the job of allocating turbary rights. Turbary rights aren’t given out any more, so people who build new homes must buy turf.

For centuries, peat was harvested in a labourious manner, each sod sliced from the bog with a spade-like slane and thrown up onto the bank to dry. It’s estimated a good turf cutter in the 1800s could cut around 8,000 sods in a 14-hour work day.

While a few die-hard hand turf cutters still exist today, most turf for private use is harvested using equipment called “sausage machines.” After scraping off the surface vegetation, peat is scooped from the bog with a front-end loader and dumped into the machine’s hopper, where it is chopped, compressed and extruded as long, square-sided “sausages” of peat. From there, the sausages are broken apart and individually turned to dry on each side, then stacked to dry further.

The bogs are also of great environmental and historical importance.

According to the Irish Peatland Conservation Council (IPCC), Irish bogs represent a wide-ranging biodiversity and provide critical habitat. Fifty-nine species of endangered birds and 15 per cent of Ireland’s original floras are found in bogs. They absorb carbon from the air, act as sponges to lessen flooding and purify water through natural filtration.

Because of their oxygen-deprived, acidic conditions, bogs are literally keepers of Irish history, naturally preserving times bygone. Many valuable artifacts and clues to Ireland’s past have been dredged up, including gold chalices and jewelry, pottery and even mummified “bog men.” These ancient people are so well preserved that scientists can tell what they ate, how they lived and how they died.

In northern Co. Mayo a bog yielded a find of unparalleled importance — a 10 sq. kilometer area crisscrossed with stone walls, dating back 5,000 to 6,000 years. The Céide Fields are considered to be the most extensive Stone Age monument in the world and tell of highly organized and extensive farming in the area. It’s believed the farmers abandoned the fields when the climate became cooler and wetter, causing the bog to grow and encroach on the farmland until it was no longer sustainable. 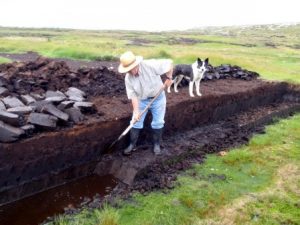 Over centuries the bog deepened, layer upon layer, until up to 12 feet of peat covered all traces of this ancient settlement. The field walls were discovered accidentally in the 1930s during turf cutting, but they weren’t fully explored for several more decades.

The type of bog that covered the Céide Fields is called, fittingly, a blanket bog. Blanket bogs began forming 10,000 years ago as dead vegetation built up in wet areas. Oxygen deprived in the waterlogged soil, the vegetation was not able to fully decompose, and layer upon layer of peat formed. Heavy rains leached minerals down through the soil, forming an impermeable layer known as an iron pan, which raised the water level, causing the bog to spread.

While blanket bogs once covered nearly 775,000 hectares in Ireland, today only an estimated 28 per cent remain intact and undisturbed. Turf harvesting, as well as overgrazing, tree planting and invasive plants all contribute to their decline. This type of bog is found primarily in the west of Ireland and in mountainous areas.

Raised bogs, found in the midlands, formed in depressions or shallow lakes. Over time, rotting vegetation filled these and a dome shape formed. Raised bogs can reach 45 feet in depth and primarily contain the highly absorbent sphagnum moss.

Raised bogs covered more than 310,000 hectares, but approximately 92 per cent has been lost to harvesting, drainage, forestry and other uses, according to the IPCC. Only 18,000 hectares of raised bog habitat of conservation value remains.

Efforts to save Ireland’s raised bogs began in 1999, when Ireland signed the European Union’s Habitat Directive, committing the country to preservation and restoration of raised bogs in 138 Special Areas of Conservation and Natural Heritage Areas. Blanket bogs are not included in the ruling.

The E.U. and the Irish National Parks and Wildlife Service worked together to purchase many of these areas from commercial peat harvesting corporations. They also paid the natural resource company, Coillte, to remove planted trees and restore bogs. 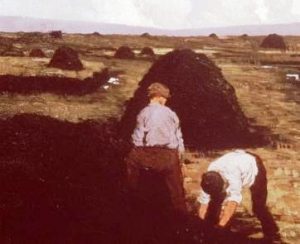 That left the other stakeholders—the people with turbary rights. The government gave turf cutters 10 years to stop cutting. They were told they could either sell their turbary rights to the government or swap their plots for ones in non-conservation areas. They were also given the option of a one-time compensation package if they stopped cutting turf altogether. The IPCC estimates the directive affected 20,000 turf cutters.

The cessation of turf cutting began in 2009, with turf cutting on the final 75 sites set to end this year. However, the majority of turf cutters have continued harvesting peat in defiance of the ban, with little or no consequences. Even after 10 years the question of compensation or bog swapping has not been settled, with many turf cutters left in legal limbo.

The turf cutters formed a group, the Turf Cutters and Contractors Association, which now actively lobbies for their rights. The group issued a statement this year, setting out their position: “Regardless of threats of state intimidation against its own citizens we will again this year continue to do what we have for centuries. We will when the weather permits be vindicating our rights. We will not be run off our lands.”

Like the old-growth forests of the Pacific Northwest in North America, peat is a non-renewable resource. Once it’s gone, it’s gone. As Ireland moves toward bog conservation and development of alternative fuels, perhaps by the time little Kate McCann reaches her mother’s age, turf harvesting will be just another relic of Ireland’s past.