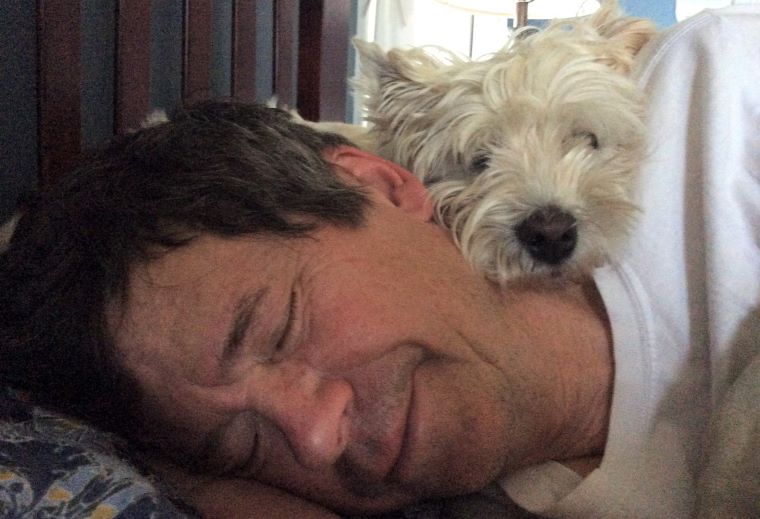 In this exclusive excerpt from his 100th book, Saltwater Chronicles, author, poet, publisher, professor, performer, hard-core surfer and Celtic Life International contributor Lesley Choyce share the story of a special bond between a man and his West Highland Terrier.

When our dog, Murdo, died in the winter of 2016, Linda and I grieved as much as any dog owners grieve over the loss of a long-time companion. For weeks, I continued to come home and automatically expect him to greet me at the door only to suddenly remember that he was gone. Like any major loss in our lives, it takes a while for it to fully sink in.

But as spring arrived, Linda and I agreed it was time to find another canine soul to share our home. Murdo had been a West Highland White Terrier and Linda was determined to get another Westie. And she wanted a puppy. In the past, I had always adopted whatever mutt came along when it was time to find a family dog, but this would be different. Much different.

For starters, I didn’t know that dogs could be expensive. I thought you simply locate someone with an unwanted litter of puppies, and they would be thrilled to give you one of them to help clear the house. But like I say, this would be different.

After a search of the appropriate breeders in Nova Scotia, it turned out none would have a Westie puppy up for sale anywhere in this province in the coming year. Linda suggested we may have to travel to New Brunswick or Newfoundland to find our dog. I said, no way, no how. Who ever heard of having to drive to another province to get a dog?

Despite my admonition of such an idea, Linda surreptitiously persisted with her search. She found someone having Westie puppies in Newfoundland but they were all taken. The woman in Newfoundland, however, said she knew of a friend in Ontario who would have a litter of puppies soon and, if we wanted, we could put in our order.

“Fly somewhere to get a dog?  Nobody does that.”

Well, some people do. But we didn’t. A road trip it would be. But not before Evelyn in Ontario thoroughly checked out our credentials. Linda also sent her the article I’d written for the Chronicle-Herald about the death of Murdo and that seemed to be the ticket. 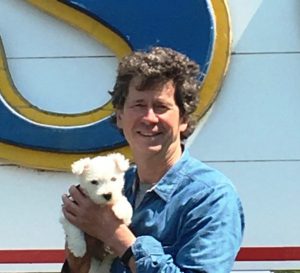 n April we received a phone call from Evelyn letting us know the batch of puppies had come into the world and one was earmarked for us. We should show up in Raeboro in eight weeks. Now that I knew there was a puppy waiting for us, I decided a road trip to Ontario was not such a bad thing. But I still believed the travel would be a bit expensive, just to bring home a dog. What with gas and meals and accommodation.

Somewhere along the line, I was informed by my wife what the dog itself would cost a sizable sum. We were, after all, not just adopting a dog but buying one. I’d never bought a dog before, so it came a bit as a shock yet again. $2000 was the price tag.

By the time my fuzzy brain processed the amount, I realized it was already a done deal.

So with travel, dog, designer dog food that the owner insisted upon, various shots and miscellaneous vet bills to come, even before we had our puppy, I was starting to call it the Million Dollar Dog, although I admit that was an exaggeration.

The eight weeks went by and we were on the road. I have to admit, I’d never driven through New Brunswick and Quebec in the summer. It was a long but glorious ride. Halifax to Fredericton, Fredericton to Riviere du Loup and up the St Lawrence to Cornwall, Ontario then on to Peterborough. And somewhere out there in rural Ontario was the end of this dog quest and a puppy waiting for a home in a faraway province by the sea.

The day before meeting our new family member, I went into a pet store in Peterbourgh to purchase the designated dogfood. It was as special variety, as previously noted.

“Really?  It costs how much?” I asked the salesperson. But it’s just dogfood, I wanted to say, but I was learning to keep my mouth shut about some things. Somehow, I couldn’t get out of the store before a dog backpack was spotted. It was pretty cool looking and had mesh covering in places, so the dog could breathe and, of course, look around him as the person wearing the backpack took the dog on long hikes. I was thinking we should just buy a less expensive back-pack at Canadian Tire and cut holes in it.

But alas, the backpack joined the dog food bag in the car as we made the final leg of our journey to Raeboro. We arrived a bit early and stopped at a small park in that rural Ontario town. The grass was brown and it was hot. (Back in Nova Scotia, the grass was green and it was still cold.) I was feeling strangely not at home here in this inland province until I noticed the hiking trail running through the park. Checking out the sign, I discovered this was none other than the TransCanada Trail, the same hiking path that met the Atlantic Ocean at Lawrencetown Beach, my home.

Something about that discovery now made me feel connected. As I sat on the dry grass and adjusted the straps on the doggie backpack, I had a vision of meeting our puppy, putting him in the backpack and heading east, hiking homeward step by step on the TransCanada Trail until  the salty spray of the North Atlantic kissed my lips. But I guess I decided it was just too long of a walk.

Kelty (full name: Kelty MacGregor) was a little white firecracker of a dog. And, as the hiking vision quickly faded, we were on the road and more anxious than ever to introduce him to his new home. 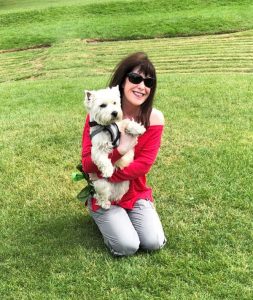 We drove for seven straight hours and ended up just south of Quebec City at a motel where they allowed pets.  (For an extra fee, of course.) Naturally, Linda and I were woken up several times that night. Puppies have to pee at regular intervals and that, of course, includes the middle of the night. I began to realize that raising a puppy was going to be a bit like raising a baby… and I hadn’t done that for over thirty years.

Everywhere we stopped to walk the dog, people fussed over him. If Linda was not right there beside me, she would invariably return to find a strange woman talking to me and petting the dog. If you happen to be a single man, out there, forget about online dating and go get yourself a Westie puppy. (I realize you may have to take out a loan, however.)

But after two long driving days we were back in Nova Scotia with our new companion, peeing and pooping on the floor and making himself fully at home.

We started out trying to get the dog to sleep in a dog bed on the floor and that didn’t work. We tried to get him to sleep on a padded chair, pushed up against our bed and that worked somewhat but eventually Kelty would find his way onto our bed, curl up on one corner, then shift to another and inevitably always ending up on my pillow sleeping just over my head. It was a bit odd but endearing and I decided it was one of those things I could just get used to.

One day we thought Kelty had a tooth infection and we took him to the vet who told us he was only teething. The advice, of course, was not free. Another time, Kelty ate a bee. The bee stung him hard on the roof of his mouth and the dog howled long and hard. But then he passed out. This scared the daylights out of us, and I couldn’t tell if he was breathing so I gave him mouth to mouth resuscitation and then we raced him back to the vet.

By the time we got there and explained the situation, Kelty was perfectly fine – breathing, alert and looking again like a happy puppy.

Kelty has chewed and destroyed various items around the home as any active young dog might. The list includes a brand-new pair of my sandals, an assortment of socks, an exercise DVD and one of a movie called Lions and Lambs.

He’s outgrown the backpack now, but I used to carry him around in the pack while shopping at the Superstore in Porters Lake. He would be quiet usually and most people wouldn’t notice him. But as soon as he was spotted, a crowd would form and he was the center of attention.

He’s house trained now and rings a set of sleigh bells by the door when he wants to go out. His passion is walking on the beach and most mornings, he convinces us we should do just that before any other work gets done.

He grew despondent when he realized he was too big to crawl under the sofa anymore, but he consoles himself by continuing to curl up on my head in the middle of the night. I’m usually fast asleep and he is so artful about it that I don’t usually realize he’s there until I wake up in the morning. 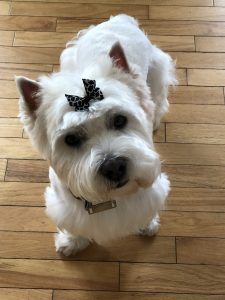 I can’t seem to stop him from chewing my pant leg and he has a small list of other faults that Linda suggests are because “he’s still a puppy.”  But now he’s coming up on his first birthday soon. And I don’t really want him to grow up and become just another adult dog.

On his really bad days, when I have to walk around the house peg-legged because I’m dragging a small white dog that has his teeth sunk into my pant leg, we refer to him as the West Highland Terrorist. But usually he is a good dog. His life is filled with barking at the arctic hares in the yard, watching out for the appearance of dogs in Netflix movies – and there are plenty of dogs in the film business it would appear – chasing balls, blowing seaweed and sea gulls on the beach, and feasting on dogfood that is much pricier than what I eat.

And as dogs do, he teaches me things as we live our life with him.  He knows how to live in the minute, to live life to the fullest and to remain faithful to those you love.

Recently we received our official Purebred Dog Certificate of Registration from the Canadian Kennel Club. It looks a lot like a university diploma and proclaims not only the dog’s purebred status but that he is the offspring of two well documented parents whose official names are Perfect Wild Boy of Surprise and Forrestfield Iremeberu. In the dog world, I guess, this is perhaps the equivalent to royalty.

But in the evening, as Kelty curls up by the fireplace with us looking perfectly contented,  I suspect he’s not all that much different from those most ancient of dogs who first fell asleep by the fires of our ancestors tens of thousands of years ago.