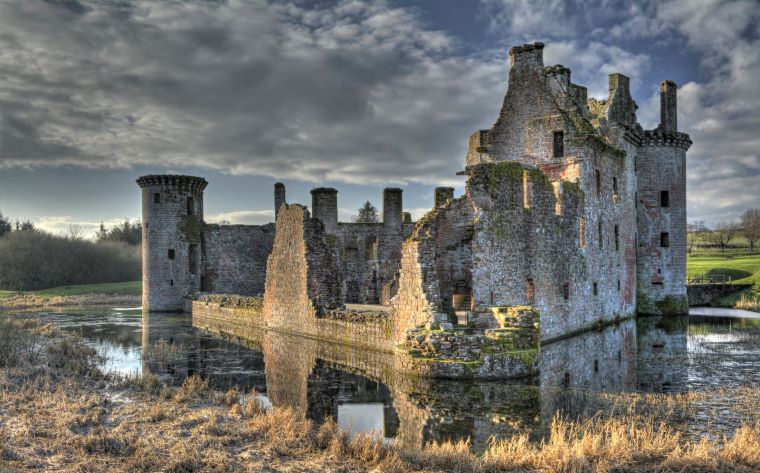 The remote corners of the Scottish Highlands and Islands are dotted with the remains of long deserted settlements. Many of them were victims of the Highland Clearances, when whole populations were forcibly evicted to make way for sheep. Others were abandoned due to changing economics, the decline of hill-farming, the shift to towns and cities, or the sheer difficulty of making a living in remote and sometimes inhospitable locations. All are eerie places to visit, remembering the cruelty of the past and imagining lives long gone.

Boreraig and Suisnish, Isle of Skye
The remains of Suisnish (seen above backed by the mighty Cuillin) and the more extensive ruins of the adjacent village of Boreraig are perhaps amongst the most evocative of all. Both villages were forcibly cleared, and as eyewitness the geologist Archibald Geikie was visiting the area at the time, and his recollection is worth quoting: ‘A strange wailing sound reached my ears… I could see a long and motley procession winding along the road that led north from Suisnish… There were old men and women, too feeble to walk, who were placed in carts; the younger members of the community on foot were carrying their bundles of clothes… while the children, with looks of alarm, walked alongside…. A cry of grief went up to heaven, the long plaintive wail, like a funeral coronach, was resumed.. the sound re-echoed through the wide valley of Strath in one prolonged note of desolation.’ Stand amongst the ruins of Boreraig, still set in fertile greensward, and imagine the families that once made their homes here.

Peanmeanach, near Arisaig
There can be few locations for a village more beautiful than that at Peanmeanach, on the Ardnish peninsula south of Arisaig. Depopulation in this area began as early as the 1730s, with displaced tacksmen taking their people to Canada and America. The Clearances saw more driven out. The last residents of Peanmeanach itself are thought to have left as recently as the 1940s.

Crackaig, Isle of Mull
Mull suffered particularly badly during the Clearances, and the remains of abandoned communities dot the island. However, the houses at Crackaig, visited late on the superb circular walk around the Treshnish coastline, tell another story. It is thought that the population here, and nearby Glac Gugairidh, was largely devastated by an outbreak of typhoid. The ruined house nearby was used for isolation.

Rosal, Sutherland
Though the ruins here are more scant, Rosal is at the heart of Strathnaver – notorious as the scene of the some of the most brutal Highland Clearances. Rosal was once one of many thriving villages in the Strath; the walk is recommended as interpretative boards help visitors to imagine life as it would once have been, a task made easier by one Donald Macleod, a native of the village who wrote about his life here.

Poulouriscaig, Sutherland
The bleak setting of the substantial ruins of Poulouriscaig tells another aspect to the story of the Highland Clearances. The settlement here was not a victim of forcible evictions, but was instead their consequence. People were cleared from the fertile straths inland – such as Rosal, above – and, having lost their homes and land, the people were forced to instead try to eke out a living on unforgiving and infertile coastal spots such as this.

Hallaig, Isle of Raasay
The ruins of the cleared village of Hallaig have a special place in the minds of many. The sad remains in a stunning location on the east side of Raasay were made famous by the Gaelic poet, Sorley Maclean, in probably his greatest poem. The words – translated into English by Maclean himself and also by Seamus Heaney – are deep with symbolism, and perhaps invite us to imagine living ‘without the heartbreak of the tale’.

Gualacholish, Isle of Mull
The ruins at Gualacholish were lived in as recently as the 1930s, which accounts for their still standing to a considerable height today. The house still visible was a very fine one, built in the 1800s for the factor of the extensive local estates. Nearby it is possible to detour to visit the old churchyard at Killean above a small sandy beach.

Ceannabeinne, Sutherland
The scant remains of Ceannabeinne, in a stunning situation on the north coast not far from Durness, tell of another story – this time of crofters’ who fought back. A series of information boards are visited along the walk, telling the story of the fifty inhabitants who were cleared from 1841-42. At one point they chased the police superintendent away, and a further attempt to serve evictions retreated when they heard the villagers lay in wait. Finally the superintendent and fourteen special constables gathered at Durine Inn. Up to 300 men gathered and attacked the inn, and the constables fled – it was the riot of Durness. Following the riot, the cause of the villagers was taken up by the national press. The folk were eventually given an extra year to prepare properly for their departure and none were arrested, but the clearance did still go ahead. 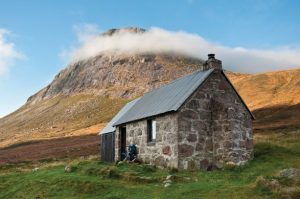 Arichonan, Knapdale, Argyll
Arichonan, a township in a beautifully wooded location in Argyll, was the scene of another riot during the Clearances. In 1848 the landowner terminated the leases of four of the tenant families but when police came to enforce the evictions the villagers, supported by others from surrounding townships, rioted. Eventually several were jailed. The haunting remains of the houses are a beautiful place to visit today, with fine views along the narrow channel of Caol Scotnish.

Badbea, Sutherland
It is hard to imagine a bleaker and more windswept spot for a settlement than Badbea – a place which, like Poulouriscaig, was built by people after they had been cleared from the fertile straths inland. According to legend Badbea was so windswept that those living here had to tether their cattle, their hens and even their children to prevent them being blown over the cliffs. Not surprisingly, the settlement did not last.

Shiaba, Isle of Mull
Over 350 people lived at Shiaba at the end of the eighteenth century. Now, like many other cleared villages on Mull and across the Highlands, there are only sheep wandering around the ghostly ruins of this haunting spot. One house still has its gables standing, reputedly this belonged to the village schoolmaster. Emigrant ships sailed from the beaches below to take the evicted villagers over the sea to the New World.

Riasg Buidhe, Isle of Colonsay
Riasg Buidhe looks like many a sad remnant from the Highland Clearances, but the story here seems a somewhat happier one. On Colonsay the Clearances were less extensive than on many other islands, and the old fishing village of Riasg Buidhe was abandoned after the First World War when the inhabitants relocated to the newer houses at nearby Glassard.

Stiomrabhaigh, Isle of Lewis
The rugged, hilly estate of Pairc, south of Lochs on the Isle of Lewis, was once home to many people before being systematically cleared to become a vast sheep farm (and later deer estate). The area cleared gradually expanded northwards; Stiomrabhaigh, is the site of just one of many abandoned villages.