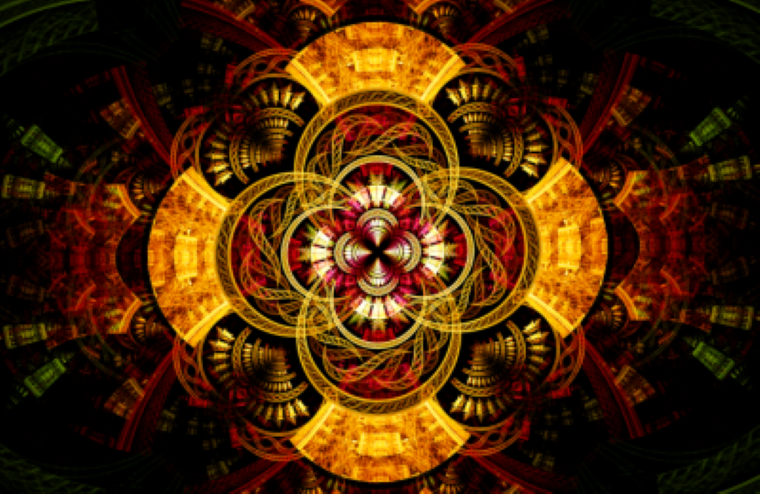 Celtic art contains fundamental elements of a system, complex but consistent, which express an understanding of a universal order.

We see a lot of crosses and dragons in Celtic art – what do they have in common?

At first glance, very little. However, the Celts believed they were fundamental elements of a system, complex but consistent, which expressed their understanding of the universal order. The starting point is the notion of centre, a crucial concept for ancient Celts. It is here that the cosmic axis is supposedly found, imagined as a tree, preferably oak carrying mistletoe, whose branches support the canopy of heaven and the roots joining the underground world. It thus linked together three superimposed worlds: the Heavens, the Earth of the humans and the Underground world.

The representation of a world defined as four parts linked by a centre is one of the most frequent themes in Celtic art, isn’t it?

Yes, since the fifth century BC. Its simplest shape, a circle and a cross superimposed, is thus depicted on flat spoons most probably used for a ritual purpose, many of which have been found in Ireland. Their midpoint is sometimes pierced, suggesting their use during libations. This association of a cross, indicating the four major directions, and a circle, symbolizing the limits of the territory that surrounds the central point, not only has a spatial value, but also a temporal one. The space defined by the journey of the sun and time can indeed not be separated: the four arms of the cross refer to the four daily events of the sun: from sunrise to sunset, including zenith and its equivalent underneath the horizon, but also the yearly events: solstices and equinoxes. 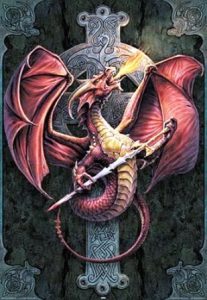 And what’s with the dragons?

The emblem of the pair of dragons, present on the Continent since the sixth century BC, decorated mostly weapons, especially sword scabbards of warriors in the fourth and third century BC. According to an account of the Welsh Mabinogi, such dragons would have been found on Excalibur, the legendary sword of King Arthur. The fight between the two dragons is figured in a most meaningful way on the cover/top of a remarkable artifact, the ceremonial jug from Brno, a masterpiece of Celtic art associated with the beginning of the bright season, the Beltane festival. It represents in a suggestive way most of the constellations that dominated in about 280BC the night sky on the day of this festival, as well as the one for both solstices and the Samain feast, beginning of the dark season.

What other images were there?

Several monuments have been discovered which marked the supposed place of the world axis, different for each community. This type of monument, known as their Greek name omphalos (umbilicus), has the shape of a pillar with decoration on each of its four faces. The most ancient one – the Pfalzfeld pillar in Rhineland, from the fifth century BC – and the most recent one – the Irish pillar of Turoe (Co Galway), probably from the first century BC – illustrate the evolution of this concept: from the representation of the divinity face wearing the mistletoe leaves, repeated on each side, to different images on each side, even maybe evocations of areas of the canopy of heaven that correspond to the four cardinal directions.

So this was about the Celts trying to impose some kind of order on their world?

The ancient Celts’ artworks are not made of borrowings or fortuitous inventions but are the expression of an extremely structured system of their idea of a universal order and its spatial and temporal understanding. Its dynamical aspect is fundamental. Its roots are ancient ones and its general elements are common to both continental and insular Celtic people. Those elements are one of the basis of their cultural unity.

And, finally, where does the Irish Christian cross come into all this?

The ultimate step of its symbolic representation is the Irish Christian cross, on which the pattern is arranged vertically. The Christ figure is in the centre – it has thus become the axis that links the heavenly, terrestrial and infernal worlds. However, on some of the crosses, solar patterns are depicted in place of the Christ. Even the pair of dragons can be found on some of them, which are supposed to have their annual fight. Such is the case of a cross of Gallen Priory (Co Offaly), where dragons coil up around a giratory pattern, a sort of curvilinear swastika, or on a Dromiskin cross (Co Louth). This confirms that the specific shape of the Irish cross is the result of a reuse of the old Image of the World in the Christian iconography. None of this is unusual, since the meaning of origin was fully compatible with the Christian doctrine. In Ireland, the image has thus been treated the same way texts from the traditional literature have been, turned away from their most obvious pagan aspects, and customized with a Christian aspect to best serve the new religion.