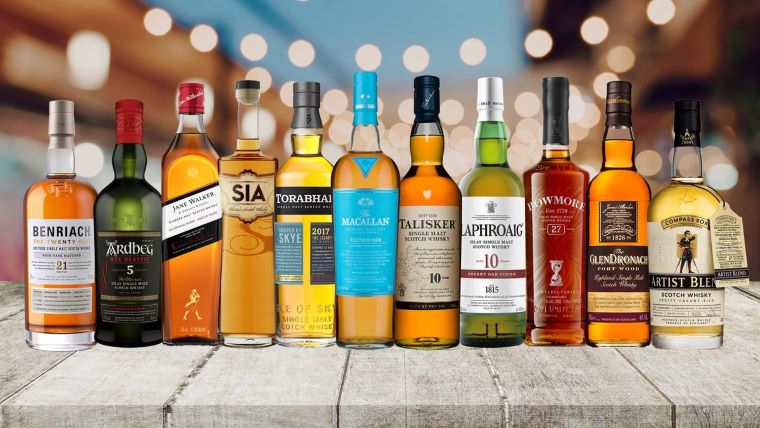 Comparing scotches can be difficult. Some people look for the peatiness of an Islay offering, others champion an expertly crafted blend. But, when it comes down to it, scotch is scotch, and we love all kinds. And while there are plenty of great Scotch whiskies we’ve tried, there are some that are simply bucket list worthy. As 2021 draws to a close, here are 15 scotches worthy of bringing in the new year.

THE MACALLAN 25-YEAR-OLD SHERRY OAK
There are many nice Macallan bottles to be had—21-Year-Old Fine Oak, for starters— but our choice, and the one that really impressed us the most, is the 25 Year Old Sherry Oak. You get tons of fruit, as if you’re smelling and tasting your way through a summertime farmer’s market. Oh, and the honey, there’s plenty of that. Expensive? Um, yeah, you could say that. Delicious? For sure.

JOHNNIE WALKER BLUE
While no other Johnnie Walker color blows us away, each has little elements we happen to like. Those good elements join forces to create Johnnie Walker Blue. It’s like Voltron. Johnnie Walker Blue is chewy and smooth with a balance of toffee, smoke, and earthiness. It’s not the best scotch we’ve ever had, but it is the “great” scotch even nondrinkers know, and it’s pretty damn tasty.

BOWMORE 25-YEAR-OLD
Bowmore is one of Scotland’s oldest distilleries, and since the 1700s, they’ve been producing fine scotch. Drawing much from its time in Spanish sherry casks, Bowmore’s 25-Year-Old is loaded with fruit and some syrupy sweetness on the tongue. All of that is balanced out but just the right amount of smoke. Smooth and tasty.

BUNNAHABHAIN 25-YEAR-OLD
If you love sherry, this is the scotch for you. With a thick and sweet profile, Bunnahabhain’s 25-Year-Old delivers the sherry goodness. Mixed in, you’ll find hints of nutmeg, leather, and just a nice bit of smokiness. 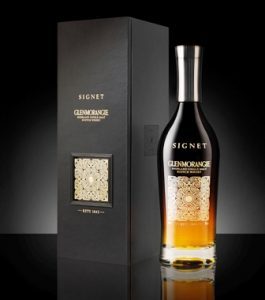 GLENMORANGIE SIGNET
For a rich and sweet whisky, look no further than this bottle from Glenmorangie. Signet is dessert scotch. With an aroma that reminds you a bit of your morning coffee, a taste reminiscent of a spicy candy bar, and a finish that brightens everything up, it’s truly one-of-a-kind. It’s a creamy treat everyone should try.

SPRINGBANK 12-YEAR-OLD
This cask-strength gem packs notes of milk chocolate and vanilla when you open it up with a few drops of water. Like other Springbreak offerings, you’ll find influences from the peat and sherry casks. At only 12 years old, it’s really an exceptional—and surprising—scotch.

ARDBEG UIGEADAIL
This Islay gem has reached iconic status. A lot of that has to do with Jim Murray naming a special Canadian bottle of it his “World Whisky of the Year” in 2009. While that scotch wasn’t your standard Ardbeg Uigeadail (pronounced ‘Oog-a-dal’), this classic is shockingly affordable and simply tremendous. It packs the smoke. Picture yourself drinking a campfire. With just a bit of sweetness, it’s a unique and wonderful scotch.

LAPHROAIG QUARTER CASK
Another peaty and smokey whisky for you to enjoy. Laphroaig’s Quarter Cask isn’t their most expensive bottle, or their most well-known, but it is one of our go-to bottles. Another true Islay offering, Quarter Cask is loaded with wood smoke, tobacco, and peat. It honors the tradition of using smaller casks to increase solid contact with the oak. The finish lingers and develops over time, and, best of all, the price is right.

HIGHLAND PARK 25-YEAR-OLD
Highland Park’s 25 Year Old was the first spirit—not just scotch—to score a 100 in the Ultimate Spirits Challenge in 2013. Needless to say, it’s kind of a big deal. It’s a rich single malt with a good amount of honey. It’s powerful and could probably use a bit of water, but the flavors are spectacular. Procuring a bottle is up to you.

LAGAVULIN 16-YEAR-OLD
In the scotch world, there are some brand expressions that are just well-known. Lagavulin’s 16 is one of them. The single malt packs a smokey wallop. And, while many Islay bottles can make a similar claim, the fullness and finish really make Lagavulin’s 16 unique. 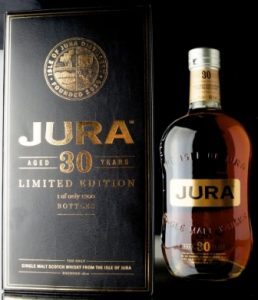 ISLE OF JURA 30-YEAR-OLD
With only 200 bottles released in the United States, the only thing wrong with this whisky is the difficulty in finding it. Loaded with a fresh grain profile that’s highlighted by hints of orange peel and toffee, Isle of Jura 30-Year-Old is a full-bodied beauty. Known as “Carnas an Staca” (“The Standing Stone”), the scotch will continue to intrigue like the ancient monument it’s named after.

OLD PULTENEY 35-YEAR-OLD
If you enjoy a finish like the one in Memento, where it leaves you sitting in amazement and deep in thought for an hour, this is the single malt for you. In the world of high age expressions, in which some have been pushed too far, Old Pulteney 35 can go toe-to-toe with any of the ones that haven’t. As mentioned before, the finish is tremendous. It slowly develops on your tongue with sweet and smokey notes appearing and fading away. Released for the first-time last year, only 450 cases were distributed around the world.

GLENFIDDICH 15 YEAR OLD SOLERA
Glenfiddich 15 is one the best bang for your buck scotches on the market. There are many more expensive Glenfiddich expressions, but this is the one that gets the most right—including the price. After a solera process and some time spent in Portuguese oak, Glenfiddich 15 emerges with a honey sweet profile with some wonderful warming spice. It’s proof that a great scotch doesn’t have to break the bank.

DALMORE SELENE
Dalmore makes some really nice whisky that you can purchase for a reasonable amount of money. This isn’t one of those whiskies. You’d be lucky to find one of the 30 bottles produced, and if you did, you’d be even luckier if it cost less than $20,000. And while it’s not the most expensive bottle Dalmore ever released, it is the one that lives up to the hype the best—as much as any bottle can live up to a $20K+ price tag. The 58-year-old scotch is named after the Titan goddess of the moon, and it packs notes of coffee, marmalade, citrus, and lots more. It’s one of those bucket list items that’s almost impossible to cross off, but the hunt for a sample of a Scotch whisky like this is fun in itself.