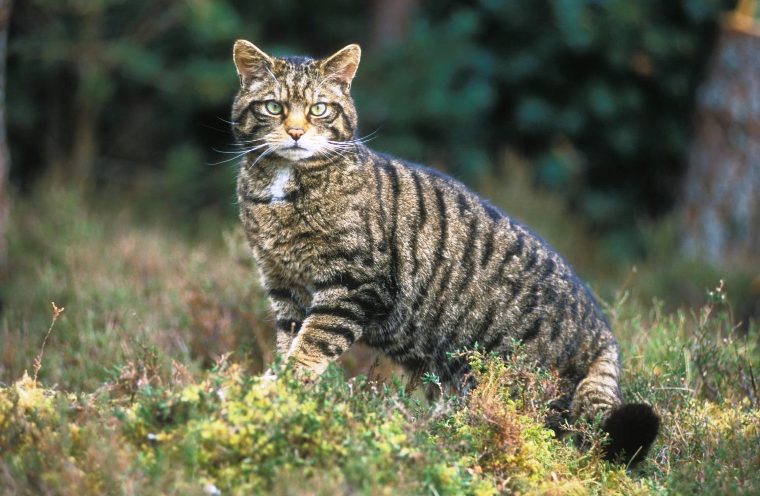 The Scottish Wildcat has lived in the north of the country for thousands of years, but research suggests this unique animal may now be more endangered than the Bengal Tiger and could soon be extinct. Tom Langlands investigates whether anything can be done to prevent the loss of this mysterious predator.

The sun dips behind the pine trees. A deer drinks at the edge of a rippling stream, its ears flicking with every sound. An owl on sentry duty calls, heralding the changing of the forest guard. There is a stirring on a branch above and the rising moon catches a pair of waking eyes as they pierce the gloom. Then, slowly he descends, like amber sap sliding down ancient bark. On the ground he pauses, displaying tiger-like black markings and a distinctive broad, ringed tail. He is alert and his senses keen. Something in the heather moves and he hugs the woodland floor, silently edging forward. He pounces and lifts his head to reveal a small vole caught in his mouth, then turns and melts into the night.

He is a Scottish Wildcat and his ancestors have lived in these forests since the last ice age separated this land from mainland Europe around 8,000 years ago. He was here before man and before domestic cats existed. Back then, he shared this island with his distant cousin the Lynx, before the latter was hunted to extinction. Now the wildcat stands alone, the only native member of the cat family to live in Britain and sadly, he too is perilously close to extinction.

The Scottish Wildcat (Felis silvestris grampia) is around fifty per cent larger than the average domestic cat. He is stockier, muscular, untamable, and has a pelage with distinctive black stripes and a blunt, broad, black-ringed tail. This, and his reputation as a ferocious fighter, gave rise to his other title — the Highland Tiger. Other less obvious differences between this cat and his domestic relatives include slightly different skull dimensions and a smaller intestinal tract. There are also genetic differences and scientific research in this area is on-going. 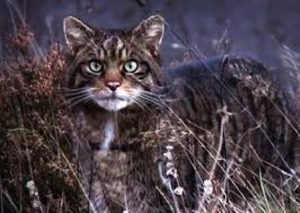 The wildcat’s preferred habitat is a mixture of woodland for shelter, fresh water for drinking and open land in which to hunt. Voles, mice, rats, birds and rabbits all form part of his diet and the ancient Caledonian forests of the Scottish Highlands and the adjacent tracts of open land provide the ideal home. It is only here, in the north of Scotland, that native wildcats can still be found. Wildcats tend to breed in midwinter producing an average litter of three or four kittens in the spring and otherwise, they are solitary animals. Scent marking is their main way of communication with a male’s territory ranging up to 18 square kilometers.

The independent and fearless qualities of the wildcat were admired by ancient Scottish tribes and clans. The myths of the ancient Catti tribe of northern Scotland tell how their ancestors were attacked by wildcats. Caithness (Land of the Cats) was home to the Pictish tribes that venerated the wildcat. Today, the Chief of the Sutherland Clan is known as Morair Chat (Great Man of the Cats).  The association of Highland clans, known as Clan Chattan (Clan of the Cats), that led the charge at the Battle of Culloden, has the clan motto, ‘Touch not the cat bot (without) a glove’. Many clans have the wildcat as their motif.

Wildlife filmmaker Steve Piper, while filming the documentary Last of the Scottish Wildcats, was so moved by their plight that he founded the Scottish Wildcat Association. It became a formal charity in 2008 and is set to become The Wildcat Trust. As Chairman of the organization, he said, “It’s hard to imagine another animal with anything like so many links into the human culture and heritage of the Highlands. It is unique to that place but sadly, much of that has been forgotten.”

Historically, wildcats have been hunted for their fur or because they killed small farm animals or birds bred for game shooting. This, along with habitat loss through deforestation, has greatly reduced their numbers. Today, the biggest problem for the wildcat is interbreeding with domestic and feral cats. The resultant hybridization destroys the true genetic signature of the species while contact with domestic cats renders them susceptible to unfamiliar feline diseases.

Establishing precisely how many wildcats exist is difficult.

Recently, efforts have been made to record as many wildcat sightings as possible and then attempt to determine if these are pure wildcat or hybrid. The results suggest that at worst, there may be only a few tens of these cats in the wild and at best, perhaps four hundred.

Piper is pessimistic about the numbers, “The hard evidence we have certainly suggests tens but there are large areas of the Highlands which have not been properly surveyed, so no one is really sure, but they are exceptionally rare. There are just a handful of sightings that seem to be true wildcats over the last decade.”

The situation is critical. If these numbers are correct, the Scottish Wildcat is now more endangered than the Bengal Tiger. I asked Piper how serious the risk of extinction is and how close we are to that position. “The situation is extremely serious. It could be months away because the conservation effort has been left to a handful of scientists and a tiny charity. It’s an appalling situation for a first world country to be in.”

Chillingly, Dr. Paul O’ Donoghue of the University of Chester, who has developed a test to confirm the true genetic make-up of the Scottish Wildcat, believes that without immediate action the extinction of the species is a certainty within 12 to 24 months. 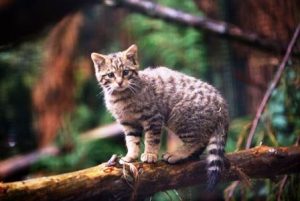 The plight of the wildcat is now acknowledged but whether the situation can be redressed remains to be seen.

Piper is an advisor to Scottish Natural Heritage (SNH). Between 2007 and 2012, SNH instigated the Cairngorms Wildcat Project. It was a Species Action Framework intended to raise awareness of the wildcat problem. SNH sought to educate farmers, game-keepers and cat owners and expand neutering programs through local vets. It endeavoured to work with estates to promote feral cat control without harming true wildcats and it intensified reporting and documentation of potential sightings.

Piper explained a Scottish Wildcat Association initiative. “We have developed a project with several expert scientists where a large number of cats are live trapped across a large field area suspected to include good wildcats. All cats can then have blood samples taken to genetically test if they are true wildcats. Anything else can be neutered to take it out of the breeding population. Over time, you end up with a region that only has wildcats in it and captive bred animals can then be introduced to diversify genetics and fill gaps between fragmented population groups.”

Given the enormity of the task I queried if it wasn’t inevitable that time for the wildcat had run out. Piper is adamant this need not be the case, “It simply isn’t their time, these creatures still appear to be here in spite of centuries of habitat destruction, heavy human persecution and of having their bloodline flooded with genes from a far more abundant species. If you took away the feral cats, the wildcat population would bounce back very quickly. This isn’t natural extinction.”

As the first shafts of sunlight sparkled on the woodland stream I looked for the wildcat that had inspired my ancestors, but he had gone. I could no longer be certain that he would return.