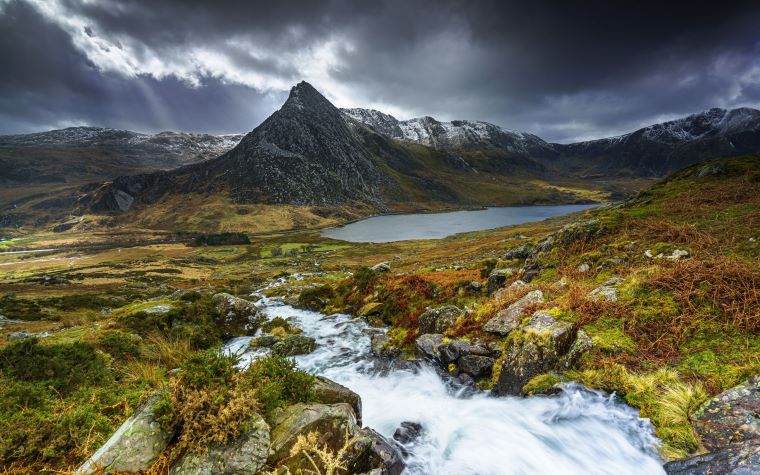 From the depths of the earth to mountain heights, the Snowdonia region of Wales has much to offer those seeking an array of attractions or activities that stretch muscles and nerves to the limit.

Llechwedd Slate Caverns fulfils all these criteria in just one location. Situated between Betws-Y-Coed and Blaenau Festiniog, it is on one of the most scenic routes through Snowdonia. This is where visitors can try out the longest zip line in Europe (and the fastest in the world at over 70 mph!) A mini-bus takes participants high above the quarry, before they fly back down across moorland, mountain and lake. Alternatively, partakers can go below ground to the new Zip World Caverns, home to the largest underground zip line and adventure course on the planet. Here, participants must scramble across nets, use zip lines, rope bridges, and tunnels on a three-hour exploration of the caverns.

Another good option is down-hill mountain biking at the adjacent Antur stiniog site. The idea is very simple – you take a minibus to the top of a trail high up on Cribau behind Llechwedd, then cycle back down. The uplift service by minibus is undertaken 20 times a day offering plenty of opportunities to try out different trails.

For something more conventional, Llechwedd’s Victorian underground Mine tour starts with a steep funicular railway taking you 400 feet underground. Then it is a long walk, through caverns dripping with water marvelling at the work of miners who spent long days underground hanging from ropes in the dark as they cut away the slate, past underground lakes and even racks of cheese maturing in the cool darkness.

On clear days, the distinctive ridge of Snowdon can be seen for miles around. Unfortunately, on our visit, the top was shrouded in clouds and 45 mph winds were blowing, making it dangerous for the Snowdon Mountain Railway to run all the way to the summit. Instead, it stopped at Rocky Valley, just halfway up. Snowdon Mountain Railway is a spectacular narrow-gauge railway starting at Llanberis, and travels for 4.7m to the summit of Snowdon. Both diesel and steam trains run regularly on the line.

The nearby Llanberis Lake Railway offers a different view of Snowdonia as the little train trundles around the far edge of Lake Padern. Stopping off at Gilfach Ddu offers an opportunity to explore the National Slate Museum located in a former slateworks complete with machine rooms, water mill and even four cottages showing how the slate miners lived from the Victorian era to the 1930’s. It is possible to book a boat trip on the lake via the Snowdon Star. 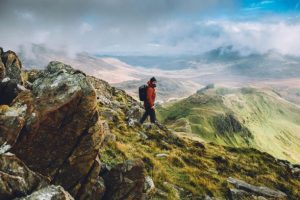 Another popular destination in Llanberis is Electric Mountain. This is an unusual opportunity to go deep into a mountain and see the power station that provides all the power at crucial times such as the massive surge in demand at the end of popular TV programmes and people switch on the kettle! Created out of a former slate mine complex, it houses over 16 km of tunnels connecting two lakes and an underground power station. Given that this was created without the aid of computer technology, just slide rules and log tables – it is an amazing feat of engineering. he great chamber used to take water from the top lake is bigger than St Paul’s Cathedral. The guided minibus tour takes you 590m below the upper lake, 60m below the lower lake and enables visitors to see the giant vertical turbines and the generators in action.

For those seeking outdoor activities, Snowdonia has plenty to offer. This is where you can explore underground, amid the rocks and in the sea. The National White Water Centre is located at Bala, and offers opportunities to experience rafting safaris and an orca adventure in an inflatable boat. Canyoning is also available – this involves travelling through canyons using a variety of methods including scrambling, abseiling, and swimming. While at Snowdonia Adventure Activities there are opportunities for groups to try Kayaking, rock climbing, Abseiling and canyoning underground. Llyn Adventures at Llanaehaern on the Llyn Peninsula takes a different route for adventure – by sea. Coasteering sessions involve swimming in the sea, scrambling across rocks, exploring seacaves and jumping into the sea from different ledges. The world’s first inland surfing centre is due to open shortly at Surf Snowdonia. Taster sessions for rock climbing within the mountains are held at Plas y Brenin, The National Mountain Sports Centre at Capel Curig.

More traditional and calmer methods of travel can be enjoyed on The Ffestiniog railway which is another of The Great Little Trains of Wales. Return trips take around 2 ½ hours. Having been operating trains for almost 200 years, it is the world’s oldest narrow-gauge railway involving a 13.5-mile journey from Porthmadog to Blaenau Festiniog. Three of the original locomotives are still in use together with original carriages. The scenery is superb as you climb more than 700 feet into the mountains, crossing an estuary, past lakes, Tanygrisaiau waterfall and through forests. Much of the track hugs the side of a mountain giving spectacular views into the valley far below. One of the most unusual aspects is the fact that the Ffestiniog incorporates the only complete spiral track in the country. This section of the track was deliberately built when original track was destroyed when a dam was created to serve Ffestiniog power station.
Porthmadog is also the start of the West Highland Railway, which operates from the same station. This picturesque railway is takes in a route through the mountains of Snowdonia, via Aberglaslyn and Beddgelert to Caernarvon. Allow about a day for a round trip, as you can stop off at stations along the way. This is a good way to explore smaller towns like Beddgelert with its legendary links to the medieval Prince Llewelyn and his hound Gelert. The grave of Gelert can still be seen.

Slightly further south is the Corris line, one of the smallest narrow-gauge railways. Journeys involve a guided tour of Maespoeth explaining its history and future plans. Other attractions close by include the Corris Mine Explorers where you can explore an abandoned mine.

Portmeiron is only a short journey from Porthmadog. Now owned by a charitable trust, the village was built by architect Clough Williams-Ellis as a demonstration of how development could enhance a site without spoiling it. Creating the village took 50 years and resulted in the development of an eye catching Italianite village set beside the Traeth Bach tidal estuary. All the buildings are painted in the bright yellows, blues, pinks and white reminiscent of the Mediterraean. There are gift shops, a spa, restaurants, a hotel and even a castle. Surrounding the village are 70 acres of sub tropical forest called Y Gwyllt containing numerous steep walking trails. A large car park set on the outskirts of the village ensures that the pedestrians have priority on the cobbled streets and steps leading down to the beach. All the buildings are used to provide self catering accommodation or retail facilities. 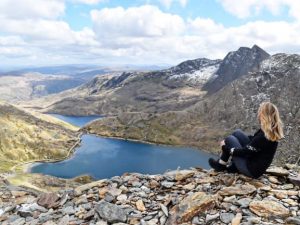 Many visitors are drawn to Portmeirion because of its film status – this was where the cult series The Prisoner was filmed. Every April, there is a special event involving fans dressing up in costume, riding mini mokes and taking part other activities related to the series.
The medieval castles that dominate Snowdonia attract thousands of visitors each year – over 100,000 visit Harlech alone. Occupying highly dramatic locations on cliffs or beside the sea, these are incredibly imposing buildings. At Harlech Castle work is underway to give it a new entrance based on the original line of the drawbridge. When complete, visitors will be able to enter the castle just as people entered it back in the thirteenth century. This was a purely defensive castle, with thick walls, murder holes and tall gatehouse. There is a small display area within the Gatehouse showing what the castle would have been like when it was in use. Visitors can climb the ramparts or stroll around the outside of the castle with views across the Irish Sea and up to Snowdon in the distance. Originally the sea would have come right up to the edge of the castle, but changes to the coastline have meant that it has receded some distance.

Further up the coast, Caernarfon Castle was a royal fortress. Like Harlech, it is a World Heritage Site. It was built not just to dominate but to rule for this was where Edward I presided and held his government. The massive structure is one of the largest of the Welsh castles, containing royal quarters, great hall, 12 towers and walls that went on to surround the town. A key feature of the castle is its stunning polygonal towers, of which the Eagle Tower is the most impressive. Visitors have a lot to explore here, from the tall ramparts and towers to guns and extensive baileys.