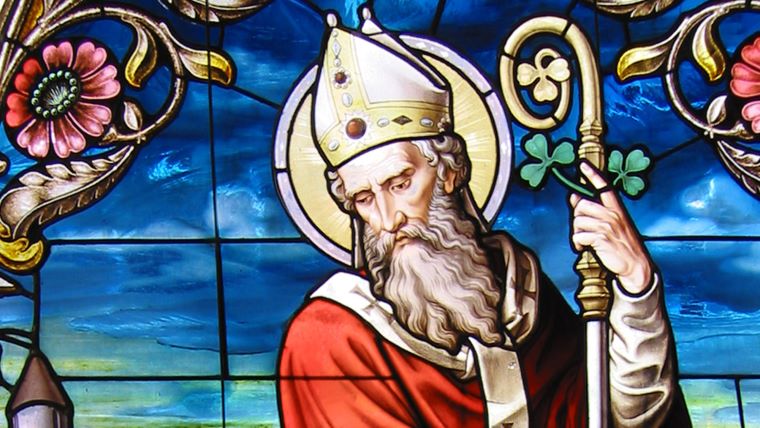 You don’t have to be Irish to enjoy St. Patrick’s Day celebrations. But who was this man? And why we do we honour him annually with green beer and great shenanigans?

Born in England arguably in the late 4th century A.D., St. Patrick was captured by pirates as a child and brought to Ireland. During his enslavement, he was called to Christianity and escaped his captors after six years. He returned to Ireland as a missionary, and in his teachings, combined Irish pagan beliefs with Christian sacrament, devising the Celtic Cross. He is annually honoured on March 17.

His father, Calphurnius, was a deacon from a Roman family of high social standing. His mother, Conchessa, was a close relative of the great patron St. Martin of Tours. St. Patrick’s grandfather, Pontius, was also a member of the clergy. Surprisingly, St. Patrick himself was not raised with a strong emphasis on religion. Education was not particularly stressed during his childhood either. Later in life, this would become a source of embarrassment for St. Patrick, who in the early 440s, would write in his Confessio, “I blush and fear exceedingly to reveal my lack of education.”

When St. Patrick was 16 years old, he was captured by Irish pirates. They brought him to Ireland where he was sold into slavery in Dalriada. There, his job was to tend sheep. Saint Patrick’s master, Milchu, was a high priest of Druidism, a Pagan sect that ruled religious influence over Ireland at the time. 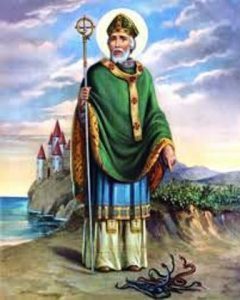 St. Patrick came to view his enslavement as God’s test of his faith. During his six years of captivity, he became deeply devoted to Christianity through constant prayer. In a vision, he saw the children of Pagan Ireland reaching out their hands to him. With this, he grew increasingly determined to free the Irish from Druidism by converting them to Christianity.

Circa 408, the idea of escaping enslavement came to St. Patrick in a dream. In the dream, a voice promised him he would find his way home to England. Eager to see the dream materialize, St. Patrick convinced some sailors to let him board their ship. After three days of sailing, he and the crew abandoned the ship in France and wandered, lost, for 28 days—covering 200 miles of territory in the process. At last, St. Patrick was reunited with his family in England.

Now a free man, St. Patrick went to Auxerre, France where he studied and entered the priesthood under the guidance of the missionary St. Germain. As time passed, St. Patrick never lost sight of his vision: he was determined to convert Ireland to Christianity. C. 431, Pope St. Celestine I consecrated St. Patrick Bishop of the Irish, and sent him to Ireland to spread “The Good News,” or Christian Gospel, to the Pagans there.

Upon his arrival in Ireland, St. Patrick was initially met with hostile resistance. But St. Patrick quickly managed to spread Christian teachings far and wide. Through preaching, writing and performing countless baptisms, he convinced Pagan Druids that they were worshiping idols under a belief system that kept them enslaved. By accepting Christianity, he told them, they would be elevated to “the people of the Lord and the sons of God.”

Throughout his missionary work, St. Patrick continued to promote the conversion of Ireland to Christianity by electing Church officials, creating councils, founding monasteries and organizing Ireland into dioceses.

St. Patrick died circa 461 in Saul, Ireland. He is said to have been buried in Ulster, County Down, Ireland.

Though he was never formally canonized by a pope, St. Patrick is on the List of Saints, and was declared a Saint in Heaven by many Catholic churches. St. Patrick was also venerated in the Orthodox Catholic Church.

The Episcopal Church annually honours St. Patrick with the celebration of St. Patrick’s Day on March 17, which falls during the Christian season of Lent. For more than 1,000 years, the Irish have observed St. Patrick’s Day as a religious holiday. Traditionally, on St. Patrick’s Day, Irish families would attend church in the morning and celebrate later – including eating a traditional meal of cabbage and Irish bacon.