Story of the Picts 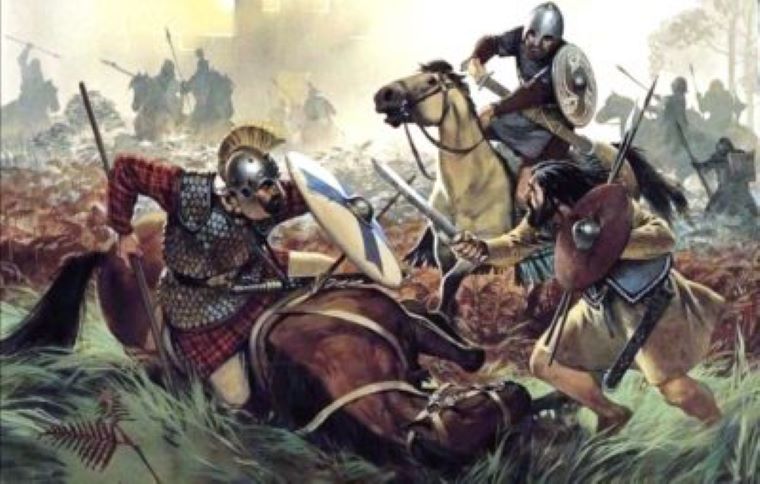 During the late Iron and early Medieval Ages, the land that would become Scotland was fought over by diverse peoples.

The west coast, around Argyll, was dominated by the Gaelic-speaking Dál Riata, whom the Romans referred to by the racially derogatory name of Scotti. The Dál Riata came from what is now Ireland and incorporated this part of modern Scotland into their powerful kingdom, which extended from modern day County Antrim in Northern Ireland.

To the south of the Dál Riata lands lay the territory of the Britons, while to the east, stretching northwards from modern day middle England to the Firth of Forth, was Northumbria, the land of the powerful Germanic Angles. The remainder of Scotland, north of a line drawn roughly between the Clyde and Forth estuaries, was the land that the Romans called Caledonni. It was a land occupied by tribes of fearsome people referred to, in Latin, as Picti – those with painted or tattooed bodies.

Aberlemno in Angus has four impressive Pictish carved stones but perhaps none more remarkable than one located in the small churchyard there. On this amazing stone, Pictish warriors are so vividly portrayed they seem to burst into life. With swords and spears, the warriors on foot and horseback are attacking helmeted horsemen, while nearby a raven pecks at the face of a fallen fighter. This stunning storyboard is believed to celebrate the victory of the Picts against the Angles of Northumbria at the battle of Dún Nechtain in 685AD. It was a pivotal moment in Pictish history that became a keystone in the evolution of the Scottish nation, so it is not surprising that the event was recorded by the finest artists of their day. 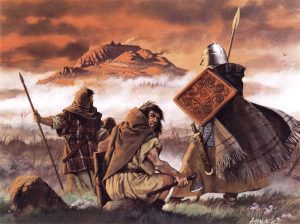 The Picts were clearly great fighters, but beyond that, who were they?

They may have been non-Celts, originating in mainland Europe; they could also have been aboriginal peoples, native to Scotland. Whatever their origins, their early society was likely no more than a loose confederation of disparate tribes. They left us with no written documents, although they did use a language we call Ogham. We do not know how it sounded, but strange marks sometimes found on the sides of stones, equating to ‘letters’, are believed to spell out names and provide clues as to what their alphabet looked like. Most of what we know about the Picts comes from the writings of others and archaeological discoveries. They were masters at carving stone and could communicate in this way using a system of unique visual symbols. Sometimes, these were clearly representational, as in a hunting scene, while in other instances the meaning is far less obvious. The resultant stone art is among Europe’s best of the period.

As Vice President of the Pictish Arts Society, that promotes research and discussion into all aspects of Pictish history, Stewart Mowatt is in no doubt about the contribution of the Picts to Scottish art and culture.

“The Picts were a cultured and artistic people,”Mowatt said. “Evidence that has survived, in addition to the carved stones, includes jewellery such as brooches of precious metal and glass artefacts. Art historians have shown that the Picts made important contributions to the development of Insular art in the latter half of the first millennium.”
Mowatt notes that their contribution also extended into music. “In music, the harps recorded on Pictish stones are the earliest record of such instruments in Western Europe,” he said.

Battles over land and dominance often erupted between the Picts and the diverse peoples with whom they lived in uneasy proximity. By the 7th century, the Angles posed the biggest threat to the Picts. For some time, the Northumbrians had been flexing their muscles in an effort to expand their kingdom to the west and north. To the Picts’ anger, they now controlled much of the land as far north as the Firth of Tay. Following the death of the Anglian King Oswui, the Picts rebelled, but the consequences were nothing short of disastrous. The new Anglian King, Ecgfrith, and his army met the Pictish forces on the southern side of the Firth of Forth in 672AD and a bloody battle ensued. It is said that so many Picts died it was possible to walk across the bodies in the Rivers Carron and Avon without getting wet. The Picts needed a new strategy if they were to avoid further oppression and it came in the form of a new Pictish king – Bridei, son of Bili. It would not be long before he would be put to the test in a defining moment in Scottish history. 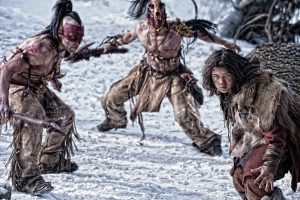 On May 20, 685AD, Ecgfrith, against the advice of his friends, councillors and his newly appointed bishop, led his army into Pictish territory. They stumbled across a Pictish war party that turned and fled and the Northumbrian army gave chase. Sensing first blood, Ecgfrith pursued the Picts into the paths of inaccessible mountains near to a place called Dún Nechtain (Nechtans’ Fort). By the time he realized his mistake, it was too late. The trap was sprung and hordes of Pictish warriors emerged to slay Ecgfrith and his army.

The exact location of the battle is debated but it was to change the course of history. The Picts wasted no time in recovering all the land lost over many decades to the Northumbrians and, around the same time, the first references to Pictland or Pictavia emerge.

It’s not surprising that today, most think of the Picts as woad-daubed warriors but, Stewart Mowatt reminds us that they had music to share and stories to tell, so it is possible to imagine something of their family life. Although our understanding of their social structure is scant, Mowatt explains that we are discovering more all the time.

“Some relatively recent excavations have revealed settlements that were quite large and included sophisticated infrastructure such as iron smelting facilities,” he told Celtic Life International. Although the Picts did conquer the Dál Riata and overrun their power base at the ancient hill fort of Dunnad in the 8th century it had little effect upon the spread of Gaelic culture. Dunnad’s day was over but the dominance of Gaelic culture was far from finished.

Slowly, there was a gradual merging of two great cultures, with that of the Picts being subsumed by the Gaels.
The final ingredient in the melting pot was delivered by the Vikings who arrived in Britain in the latter part of the eighth century. The Scandinavian marauders forcibly brought a new mix to the old order. It was from within this cauldron of cultures that Alba, the Gaelic word for Scotland, first appeared around the 10th century…and a nation was born.