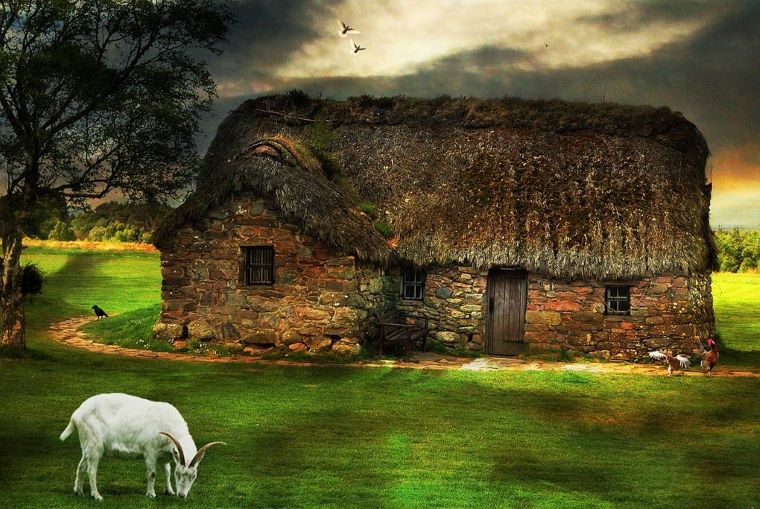 Callakille, Applecross
This lovely, whitewashed croft teeters above the sea on the wild Applecross peninsula (made famous by the first Monty Halls’ Great Escape series on the BBC). Inside it’s all vintage chic with faded floral cushions, white-painted floorboards, deerskin rugs and a wood-burning stove, and romantic views over the sea to Skye. The waterfront village of Applecross, with its cozy pub serving slap-up seafood, is an eight-mile drive down the road.

Corran Lighthouse Lodge, Loch Linnhe
Sail across Loch Linnhe to the sparkling white lighthouse on the horizon. Only a ten-minute hop on the ferry, the old lighthouse-keeper’s cottage is now a pretty five-bedroom retreat: pale wooden floors, wood-burner, squashy sofas, and a country kitchen complete with Aga. The lighthouse, built by Robert Louis Stevenson’s uncle in 1857, was one of a chain marking the route to the Caledonian Canal. A walled garden leads down to the shore of the tidal sea loch, and views across to Glencoe and Ben Nevis.

Monty’s Cottage, North Uist
Thick walls and peat fires kept Monty Halls snug when he lived in this traditional blackhouse on North Uist. The gorgeous, thatched cottage was his base while he filmed his Great Hebridean Escape for the BBC. Fergus, the local laird, renovated the croft and now lets it out as a holiday cottage (you book through the Hebridean Smokehouse, which he also runs). It’s down a private track, with nothing but acres of stubbly sheep-grazed ground between you and the sea. 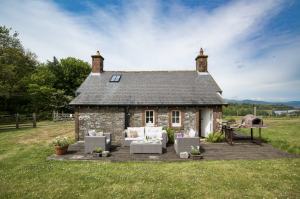 South Shore Cottage, Eilean Shona
Eilean Shona is a tiny, wooded island off the West Coast, owned by Robert Devereux (who is married to Richard Branson’s sister Vanessa). It’s only two miles long and one and a half wide — and it’s also where J. M. Barrie penned Peter Pan. You can rent the big house or one of five rustic-chic cottages. To reach South Shore, the most remote of the cottages, a motorboat whisks guests across the loch. The cottage stands alone on the hillside, facing west. There’s no electricity — you cook on a little stove by gas lamp.

Saddell Castle, Kintyre
Far-flung and a castle to boot: this Landmark Trust property on the remote Kintyre peninsula is pure fairytale. Built in 1508 and a Campbell stronghold for 400 years, it has parapets and battlements and its own rugged shoreline. Perfect for building bonfires on the beach, windswept walks, and historical fantasies.

Knoydart House, Knoydart Peninsula
Knoydart is on the mainland, but there are no roads in. It’s an 18-mile hike from the nearest road or a boat ride from Mallaig, on the West Coast. The owners, Ian and Jackie Robertson, have just finished building a luxury eco-lodge, with five bedrooms. All soaring cathedral-style ceilings, underfloor heating, antique furniture, and an ultra-modern kitchen. It also has one of the best hot tub views in Scotland. 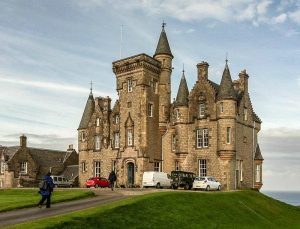 Cambo Estate, Fife
Bowl down the hedgerow-fringed lane from St Andrews to Cambo. Now famous for its snowdrops, the estate, tucked away in the trees, was first occupied by John De Cambo in the 12th century. You can bed down four-poster-style in the grand house’s B&B or check in to the handful of holiday cottages and apartments. The West Wing is a grand old pad, dripping in period features.

Waterfall Cottage, Kenmore
This magical spot, down a single-track lane above Loch Tay, is home to a contemporary hideaway. The glass and timber retreat, with its corrugated iron roof, is two miles from the village of Kenmore at the end of the loch. Inside it is sleek yet cozy, with underfloor heating and wood-burning stove.

Blue Reef Cottages, Harris
Two turf-roofed, chunky stone dwellings in the remote crofting community of Scarista on the Isle of Harris look out over one of the island’s most spectacular sandy beaches. Blue Reef Cottages are modelled on Neolithic houses, bedded into the machair and built as cozy retreats for couples. There are bicycles, picnic baskets and beach towels. In the bedroom there are Harris Tweed furnishings, and in the bathroom, a hot tub and sauna.