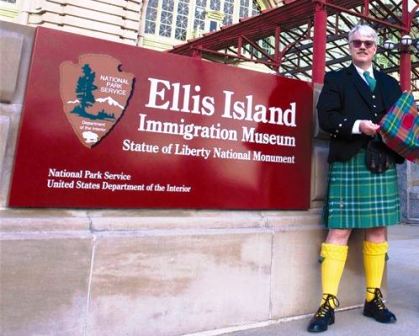 Ellis Island sits in Upper New York Bay – a small piece of land that is big on history.

Over 12 million immigrants entered into the United States through Ellis Island. From 1892 – 1954, close to half a million of those new Americans were Scots. As such, it is perhaps appropriate that the landmark hosts the largest annual Tartan Day event in the world.

“Tartan Day is a day of recognition for Scottish heritage and history,” shares Bob Currie of the Clan Currie Society, who is the founder and director of the annual Tartan Day on Ellis Island celebrations.

In 1986, Jean Watson of Nova Scotia decreed April 6 as Tartan Day. It quickly caught on with the rest of Canada and other parts of the world.

“Groups like the Clan Currie Society and the New York Caledonian Club had previously marked individual dates as being recognized as ‘Tartan Day,’” continues Currie via email. “But this was the first effort at adopting Tartan Day as a recurring, national celebration.”

Currie has been organizing Tartan Day on Ellis Island for the last 15 years.

“Where else to celebrate a national ethnic celebration than on Ellis Island – the ‘golden door’ to the United States for so many immigrants bringing their hopes and dreams of a new life in a new world? Ellis Island is a very popular international tourist destination. Visitor numbers are incredible. It’s wonderful to see the faces on the visitors to Ellis when their ferry boat arrives on the dock to the sonic blast welcome of a 20-piece pipe band and the beauty of Highland Dancers.”

Currie’s mandate has remained the same since the event’s inception: to provide an introduction and celebration to Scottish heritage through traditional music, dance, storytelling and crafts. “And,” he adds, “it’s all presented free of charge.”

In addition, the celebration usually includes an exhibition on Scottish history and culture. About 10,000 people show up for each day of festivities.

“We’ve covered everything from the history of tartan to the Scots who helped open the American West,” notes Currie. “They have all been extremely well received.”

In addition to celebrating the gathering’s fifteenth anniversary, 2016 marks the Centennial of the US National Park Service.

“The US National Parks are the pride and envy of the world, covering everything from Ellis Island and the Statue of Liberty in the east to the vast natural beauty of Yellowstone and Yosemite in the west,” Currie explains. To honour the hundredth anniversary, Clan Currie was asked to resurface the Life and Legacy of John Muir exhibition they produced in 2005.

John Muir, an inventor-turned-naturalist, was born in Scotland but immigrated to America in 1849. The family made a six-week journey overseas from Glasgow until they reached New York. At the time, Muir was only 11 years old.

“John Muir is lovingly referred to as the ‘father of our national parks.’ His deep love of wild places and his poetic writings of the natural world served as an inspiration to people from all walks of life. He formed the Sierra Club, one of our nation’s leading conservation groups and his influence played greatly in the formation of the US National Park Service in 1916.”

The John Muir exhibition is slated to be on display for the entire summer of 2016.

Currie says the size and scope of Tartan Day celebrations may vary, but all are equally important – whether they take place in the United States, Canada or Australia.

“We are proud to be counted among the vast array of programs. Sharing our rich and dynamic heritage is a privilege, and making it relevant and contemporary is our responsibility.”

Given the popularity of Tartan Day on Ellis Island, it’s only fitting that a tartan would be designed in its honour. In 2011, in conjunction with their exhibition on the history of tartan, Clan Currie commissioned the Ellis Island tartan – an array of blue, green, red and gold.

“We wanted to have a relevant and timely example of how a new tartan comes to life. Further, we had been aware for some time that most tartans were not perhaps as inclusive as a tartan might be. The result is the Ellis Island tartan, a symbol that is not just for those of Scottish descent, but for all races and nationalities.”