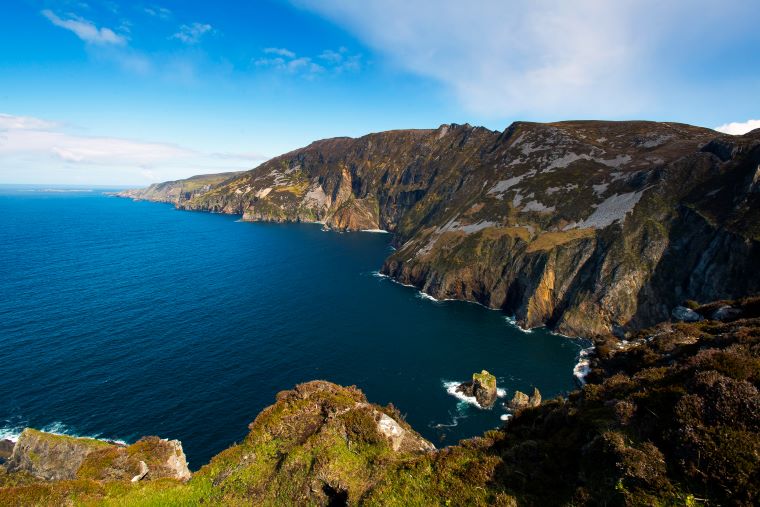 Many people still regard Donegal as an unequaled destination to visit in Ireland, as it has so much to offer in terms of its aesthetic delights and hospitality of its people. Another name associated with Donegal is Tír Chonaill, meaning Conall’s land or territory. This name historically only referred to the west of the county, excluding Inishowen and other areas. This was derived from Conall, claimed by some historians to be the son of fifth century monarch Niall Noigiallach, or Niall of the Nine Hostages. Donegal’s general contribution to Irish history, politics and culture (among many other themes) is considerable. Sports stars such as Packie Bonner from Burtonport, literary legends such as Frank McGuinness from Buncrana and musical maestros such as Enya Brennan from Crolly are just a few of the talented individuals to hail from Donegal in recent decades. But what about the place itself – with those magnificent cultural and historical landmarks and places of interest, that draws thousands of visitors each year?

Slieve League Cliffs and the Wild Atlantic Way
The 1,235km of coastline with its sheltered bays and Blue Flag beaches is a key stretch of The Wild Atlantic Way along Ireland’s beautiful west coast. Donegal is the designated northern starting point – and this road trip traces the coastline from Malin Head on the Inishowen Peninsula, mainland Ireland’s most northerly point, to the seaside town of Kinsale in Co Cork. Situated on the southwest coast of Donegal, the Slieve League Cliffs are the highest marine cliffs in Europe. At 1972ft, views from here include Donegal Bay and surrounding counties Leitrim, Sligo and Mayo. To the west is the Atlantic Ocean and northwest is Rathlin O’Beirne Island and Glencolmcille. During the second World War, the word Éire was placed in large stone on headlands around Donegal, to act as a navigational aid for the Allies’ planes to fly along the Donegal Corridor. One such sign remains at Slieve League.

Bundoran and Rossnowlagh beaches
Donegal beaches have long been considered some of the most beautiful in the whole of Europe. Bundoran’s beach isn’t far from the town’s main street and is a popular destination with surfers. In 2012, it was recognised as a world-renowned surfing area and was listed by National Geographic magazine as one of the World’s Top 20 Surf Towns. The neighbouring Rossnowlagh Blue Flag Beach is set in a 4km crescent with views of the Donegal Bay coastline including Slieve League; confined by the Coolmore cliffs to the South and extends up to Inishfad at Durnesh Lake to the north. The beach is also noted for its surfing, and it even has its own surf school.

Amazing Grace
The world-famous hymn Amazing Grace was written by John Newton; and it is based on his experiences when he took refuge near Buncrana on the Inishowen Peninsula on April 8th, 1748, having safely survived a shipwreck and storm in the Atlantic Ocean during his voyage from Cape Lopez to England. The dramatic episode had a profound impact on Newton: having been an advocate of slavery up to that point, he became a clergyman and his work with William Wilberforce led to the first anti-slave trade legislation being passed decades later. Buncrana is now home to the Amazing Grace viewing point, and signs in the area welcome visitors to Amazing Grace Country.

Bád Eddie (Eddie’s Boat)
This is a wrecked fishing vessel that has lain on Magheraclogher beach in Bunbeg since the 1970s. It attracted much fame during the 80s when it was featured in a music video featured Donegal group Clannad and Bono from U2. 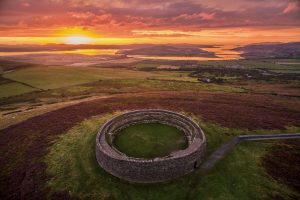 The Grianán of Aileach
Located at the edge of the Inishowen Peninsula, it is the most famous of all the stone forts in Donegal. Also known by its Irish name of Grianán Ailigh, the name is roughly translated as Stone Forts of the Sun, and is one of the royal sites of Gaelic Ireland. According to the Annals of the Four Masters, the Grianán was originally erected by the De Dananns under their king, Dagda, about 1700 BC. According to legend, St. Patrick visited the Grianán, and preached the gospel there in AD442. The Grianán commands panoramic and strategically important views of important Lough Swilly and Lough Foyle waterways.

Beltany Stone Circle
Located south of Raphoe, this megalithic monument is thought to date from the later Bronze Age. This stone circle is located on a hilltop with an impressive panoramic view. Well preserved, this national monument is one of the largest and earliest stone circles in Ireland with a diameter of 145ft. It originally comprised of 80 upright stones – of which 60 still stand. The name Beltany derives from the spring festival of Baal Tine – the fire of Baal (the sun god and ruler of nature). This is also linked to Oíche Bealtaine, the eve of May 1st, a time of celebration to mark the beginning of the growing season.

Doe Castle
Located on an inlet of Sheephaven Bay protected by sea on three sides, it consists of a four-storey central tower with adjoining outbuildings enclosed by a bawn. While Doe Castle was erected by Naghten O’Donnell for one of his seven sons, it later became the main seat of the MacSweeney clan. Their grave slab is now fixed to its wall, and was the base for O’Doherty’s raids on Derry in 1608. Abandoned circa 1700, it fell into ruin before being restored as a residence by the Donegal MP George Vaughan Hart in 1810, and made his home there until 1864. The castle is now maintained by the Office of Public Works.

Kilclooney Portal Tomb
The beautiful Kilclooney Dolmen near Ardara dates from circa 3500 BC, and is regarded as one of the finest examples of a portal tomb anywhere in Ireland. Its impressive capstone measures 13 feet wide, 20 feet long and stands over 6 feet high. The lower end of the capstone is unusually supported by a small stone which was placed on top of the backstone. It is believed that this extra stone was placed to allow extra light to shine into the tomb.

An Grianán Theatre and Polestar, Letterkenny
An Grianán Theatre opened to the public in October 1999, and is now well-established as an integral part of Donegal’s cultural landscape. An Grianán has worked in close partnership with other key players in the county and nationally _ including Earagail Arts Festival – to develop the local arts scene. The eyecatching Polestar work of public art is located at the Port Bridge roundabout in Letterkenny, this monument is made of 104 timber poles and rises to a height of 12m. Its shape alludes to the outline of a boat, pointing to local maritime history where Port Ballyraine facilitated the importation of timber to the building trade.

Statue of Rory Gallagher
The blues guitarist Rory Gallagher was so influential that Bono once declared the Ballyshannon musician to be one of the top ten guitar players of all time. Gallagher’s debut album made it into the American charts in 1969; and his contribution to the Irish music scene has been honoured in a number of ways – most visually in the statue of Rory erected in Ballyshannon in 2010.